The No. 5 Corvette DP from Action Express Racing continues to build momentum in the early stages of the TUDOR United SportsCar Championship, as Sébastien Bourdais drove the Rolex 24 At Daytona-winning machine to the top of the time chart on Friday for the second consecutive day at the Sebring International Raceway winter test. 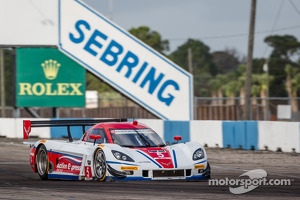 The two-day test in preparation for the Mobil 1 Twelve Hours of Sebring Fueled by Fresh From Florida included 42 cars across four classes. The March 15 race is the second round of the TUDOR Championship and the Tequila Patrón North American Endurance Cup.

“The car was not quite as good as yesterday,” said Bourdais. “We’ve been going through our test program, and seeing how the car responds to changes. It was not perfect today. Traffic was challenging, and the wind was not predictable. It was gusty and quite strong at times, and I went off twice. It looks like our car is strong, but this race is going to be a big challenge.”

The No. 25 8Star Motorsports ORECA FLM09 in the hands of Tom Kimber-Smith led the Prototype Challenge (PC) class for the second consecutive day in the car he shared with Eric Lux. Kimber-Smith logged a best lap of 1:56.289 (115.781 mph) to lead his third of four sessions at the winter test. However, his time of 1:55.940 (116.129 mph) from Thursday’s first session that stood up as the fastest PC lap of the test.

“This was the first time 8Star tested here in a PC, and to be quickest in three of the four sessions is very encouraging,” Kimber-Smith said. “This was a very good test. The track changed dramatically overnight. This test was important because I feel this is how the track will develop during race week. We’re in a good position for the race, and I’m looking forward to coming back in a few weeks.”

· Starworks Motorsport and Honda debuted its new 3.5-liter Daytona Prototype engine at the Sebring winter test. EJ Viso and Scott Mayer put the new engine through its paces over the two days, posting a best time of 1:57.910 (114.189 mph).

· Reigning IndyCar Series champion Scott Dixon joined Chip Ganassi Racing teammates Scott Pruett and Memo Rojas Friday afternoon to test the No. 01 Telcel Ford EcoBoost/Riley DP. Dixon turned in the team’s fastest lap of the day at 1:53.452 (118.676 mph). “My last time here [in a sports car] was 2009 with de Ferran Motorsports, and it’s fun to be here with this team. Sebring is about as far opposite as you can go from Daytona, which is really smooth. Sebring has a lot of character. It is bumpy in comparison and more technical, which to me is a lot of fun.”

· Nissan PlayStation GT Academy winner Jann Mardenborough got seat time in the No. 6 Nissan/ORECA of Muscle Milk Pickett Racing at the winter test. The team announced early Friday that Mardenborough – who finished third in the LMP2 class in the 2013 24 Hours of Le Mans – has been added to the team’s Sebring lineup alongside 2012-13 ALMS P1 champions Klaus Graf and Lucas Luhr.