Corvette Racing at Road America: On to the Race! 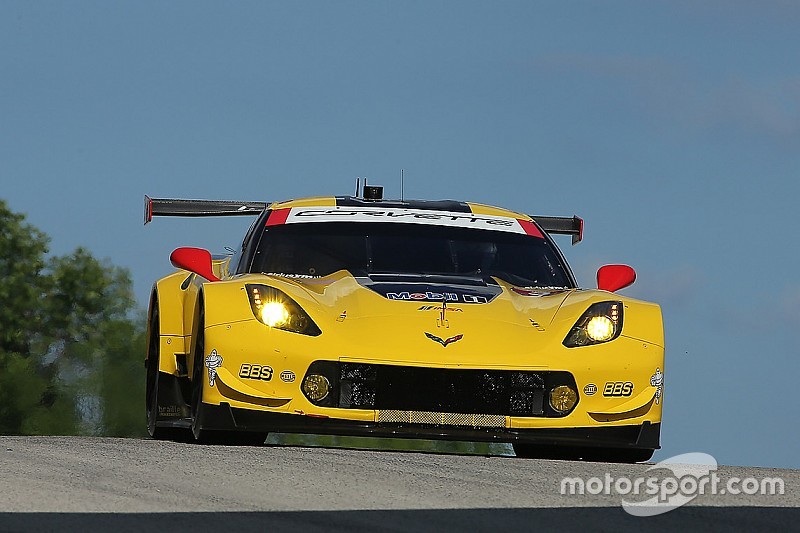 Eklhart Lake, Wis. (Aug. 6, 2016) – Corvette Racing will go for victory No. 101 on Sunday from the third and fourth rows of the GT Le Mans (GTLM) grid in the Continental Tire Road Race Showcase at Road America. Meanwhile, Chevrolet sees a pair of its Corvette Daytona Prototypes on the front two rows of the Prototype field for this weekend’s round of the IMSA WeatherTech SportsCar Championship.

He and Tommy Milner arrived at Road America with a 10-point advantage in Driver’s points – the same advantage Chevrolet has in the GTLM Manufacturer’s Championship. The pairing has won three times this season including the most recent event at Lime Rock Park for Corvette Racing’s 100th victory.

Garcia and Magnussen enter Road America with two consecutive podium finishes – third at Canadian Tire Motorsport Park and second at Lime Rock – to move up to third place in the championship. Garcia had a slight spin in the final corner on what may have been his best lap, but he still found himself just a half-second from the front row in an indication on how close the competition is in the class.

Garcia also was quickest in Saturday morning’s practice session. He, Magnussen and the No. 3 Corvette team missed much of Friday’s first practice with an electrical issue.

In Prototype qualifying, Christian Fittipaldi was second in Action Express Racing’s No. 5 Mustang Sampling Corvette DP with a lap of 1:55.659 (125.9 mph). He and teammate Joao Barbosa lead the Prototype Driver’s Championship – as does Chevrolet in the Engine Manufacturer standings. The pairing won at Road America two years ago and were runners-up last season.

Ricky Taylor was third-fastest in qualifying Saturday with a 1:55.685 (125.9 mph) in Wayne Taylor Racing’s No. 10 Konica Minolta Corvette DP to put him just 0.026 seconds behind Fittipaldi’s time.

Eric Curran, who won last year with Dane Cameron at Road America, was fifth Saturday in Action Express Racing’s No. 31 Whelen Engineering/Team Fox Corvette DP at 1:56.120 (125.4 mph). The Curran/Cameron pairing is second in Prototype points. Marc Goossens qualified sixth for Visit Florida Racing with a lap of 1:56.992 (124.5 mph) in the No. 90 VisitFlorida.com Corvette DP.

The two-hour, 40-minute Continental Tire Road Race Showcase from Road America is scheduled for 3:05 p.m. ET on Sunday. It will air live on FOX Sports 1 starting at 4:05 p.m.

Antonio Garcia, NO. 3 Mobil 1/Sirius-XM Chevrolet Corvette C7.R – Qualified sixth in GTLM: “The car probably wasn’t perfect. After we missed the first practice, we have been playing catch up. It was difficult to really judge and set up the Corvette perfectly; we were guessing how the car would be. Maybe we misjudged a few things we had in the last practice that we took away for qualifying. It’s a shame we learned that in qualifying. I was on a good lap when I spun on the last corner, but maybe that could have moved me up one position. But losing the track time Friday was tough.”

(Race strategy): “The strategy has been very good for us. It’s important when you are leading and when you chasing. Maybe not being in the top-five lets you gamble and try something to put pressure on the other teams. We will try everything we can. The opportunity is there and that can definitely play in our favor.”

Oliver Gavin, No. 4 Mobil 1/Sirius-XM Chevrolet Corvette C7.R – Qualified Seventh in GTLM: “We need to go back and look and what we did before the qualifying session. It didn’t look like we were that far off this morning. It was cooler, the track was cleaner, there hadn’t been support series races. It’s the usual deal; the car is good in the morning, then the track gets hotter, the support series races happen and then the car is generally worse. We had a Corvette that was very loose. Right at apex when you try to get back on throttle, it was just dancing around a little too much. Maybe I could have gotten a better time early when I thought the tires would come in? Maybe we could have challenged some of the cars in front. Realistically, I think most everyone had more pace than us in qualifying. We’ll go back and work a bit harder.”

(Starting and finishing positions in previous races): “We’ve usually worked our way forward and been able to capitalize on other people’s mistakes. We work really well as a team with pit stops, strategy and tire choice. The driving has been strong. We’ll have to wait and see if that’s achievable tomorrow. But the last few races have been good for us.”

Christian Fittipaldi, Action Express Racing No. 5 Mustang Sampling Corvette DP – Qualfied Second in Prototype: “I’m obviously happy with where we’re starting. I’m not overly excited about the lap time because at the red flag, I felt there was a better lap coming. But the team did an excellent job. They gave me a very competitive car. Let’s hope for a good race tomorrow. Tomorrow is a million times more important than today, and let’s try to get the best we can get. Firstly, we will concentrate on winning the race. If that happens, we will take it. If not, we will try to score as many points as possible because it’s critical for our position in the championship.”

Ricky Taylor, Wayne Taylor Racing No. 10 Konica Minolta Corvette DP – Qualified third in Prototype: “It was a bit of a funny qualifying with the red flag in the middle of the session. I don’t think we had a real shot at the pole, but I think we have some changes we can make for the race that will give us a good Corvette DP. Over the long run, this track is hard on tires but I think we have some stuff we can do to help us go the distance.”

GTLM Standings (After seven of 10 events)

Prototype Standings (After seven of 10 events)