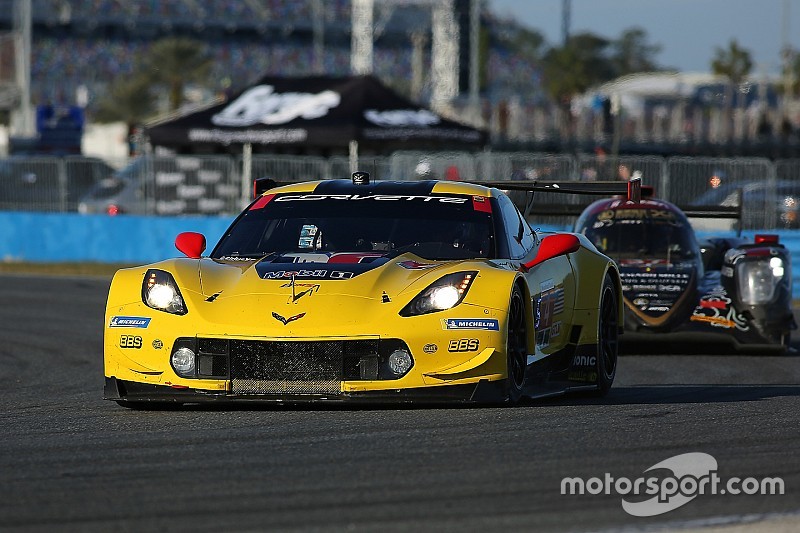 Corvette Racing’s Oliver Gavin has admitted that second fastest time in Daytona’s Roar Before the 24 test was the result of drafting practice with teammate Antonio Garcia.

The two Corvette C7.Rs logged more than 1400 miles between over the three days and clocked second and fifth fastest times in the prequalifying session that determines the pitbox/garage assignments for the race. Their times were 1min43.640sec and 1:43.998 respectively, and were the result of 2016 Daytona winner Gavin and 2015 winner Garcia running in tandem.

Said Gavin: “Antonio and I had discussed with one another how we were going to do that session, and our engineering team talked it through with us. We had a strategy and plan, and it paid off. Antonio was in front of me for five laps and basically pulled me around. It got me in second position.

“It proved that a strategy like that would work. Would we have been this close to the front without that? Absolutely not. I don’t  know how far off we would have been, but we certainly wouldn’t have been second. It is nice to see a plan come together and work that way.

“Antonio once again drove brilliantly and set it up perfectly. He and I have got some history here now, and we know how to drive around one another here at this track! We have a good understanding and are good friends.”

Garcia added: “We practiced that during the last two practices and on old tires. Traffic didn’t make it easy to do it, but then having our two Corvettes so equal made it less difficult. My only goal was to stay as fast as possible all the way to Turn Six, and then give Olly a nice tow all the way to the Bus Stop.

“We tried one lap where I just stayed in front of him to start/finish, and then the next one was like the finish of the 2016 race where he won by a foot! We timed it so he would go across the line in front of me. So I think it was worth quite a few tenths. We didn’t make it to be the fastest, but, that’s basically what we had to do to finish where we are.

“That’s really a very small portion of what the 24 Hours will be like, but it is good to have that experience.”

Jan Magnussen who will share the #3 Corvette with fulltime partner Garcia and “third man” Mike Rockenfeller, observed: “We had a good test and got through a lot of stuff. It was super cold most of the test, so it will be interesting to see if that helps us. Today was a little better and more representative of what we will have for the race. This is a brand new car, so we were able to shake it down and didn’t have any issues.”

Marcel Fassler, who will again serve as enduro driver in the #4 Corvette with Gavin and Tommy Milner, and was part of the victorious lineup at Daytona in 2016, said: “There were a number of items on our test plan, and we ran through it fairly smoothly. I also am happy with the time I could spend in the Corvette, even dividing it between three drivers. It was fairly easy to adapt to the car again after some time away."

Corvette Racing and Garcia/Magnussen are the defending GTLM champions in IMSA. The team’s first of three Rolex 24 victories was scored by a C5-R in 2001, with Ron Fellows, Johnny O’Connell, Franck Freon and Chris Kneifel at the wheel. Despite running in what was then called the GTS class, they won overall and by eight laps.