CTMP IMSA: Braun/Bennett claim amazing win from back of pack 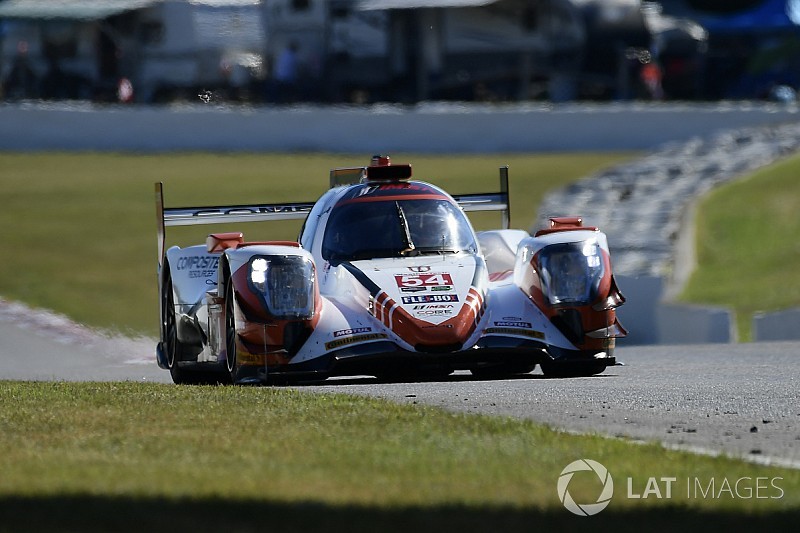 Colin Braun and Jon Bennett won the seventh round of the IMSA WeatherTech SportsCar Championship at Canadian Tire Motorsport Park in their CORE autosport Oreca – despite giving up their pole position starting spot.

Although Braun set the pole time, having dominated every session this weekend, the team elected to start with his much slower teammate Bennett – and thus had to start from the rear of the Prototype field. “I’m just a business guy with a dream,” admitted Bennett.

They took advantage of the early yellow to install hotshoe Braun, once Bennett had completed his minimum drive time, and Braun charged from 12th to sixth as the race hit the one-hour mark.

Before that, Penske’s Dane Cameron hared into the lead from his inherited pole position in the #6 Acura, while the #10 WTR Cadillac of Renger van der Zande and Jonathan Bomarito in the #55 Mazda passed front row man Robert Alon (#85 JDC-Miller Oreca) in the opening corners.

Van der Zande challenged Cameron hard as they hit the tail-end of the GTLM traffic on lap 11, but in clean air the Acura was able to stretch its lead again.

The first full-course caution, for a stranded Porsche 911 GTD car, shook up the pack after just over 20 minutes. Cameron stayed out in the leading #6 Acura, with the big winner being the #31 Action Express Racing Cadillac that Eric Curran had pitted just before the yellow, which leapfrogged newly-installed co-driver Felipe Nasr up to third.

At the restart, van der Zande passed Misha Goikhberg in the Watkins Glen-winning JDC-Miller Oreca for second, which had stayed out during the yellow. The second full-course caution occurred soon after, with Christian Nielsen getting her GTD Wright Motorsports Porsche beached at Turn 5.

Cameron pitted on lap 35 under green, dropping him outside the top 10, just as Nasr got around Goikhberg for what was now second behind van der Zande. Dalziel slowed and pulled into the pits with turbo issues.

Bomarito and Ricky Taylor swapped places again, just after Goikhberg boxed the Acura in behind a Ford GT. Bomarito then did likewise to get around Goikhberg in GTD lappery, with Taylor following suit.

A third full-course caution was required when the #52 Ligier lost a wheel, just before half distance. This prompted the entire field to pit, with Jordan Taylor taking over the leading #10 Caddy from van der Zande, ahead of Cameron (who short-filled after his green-flag stop) and the AXR Cadillacs of Nasr and Filipe Albuquerque (in the #5).

Another full-course caution was required almost immediately due to debris from the #912 Porsche at Turn 5, which caused drama at the front as Cameron pitted from second with a puncture. He rejoined under a red light at the end of pitlane, resulting in a 60s stop/go penalty – putting the #6 car totally out of the picture.

Jordan Taylor pulled clear at the restart, easing away from Nasr, with Harry Tincknell up to third in the #55 after taking over from Bomarito. Ricky Taylor got around the Mazda as the race entered it final hour, as Braun passed Albuquerque for fifth, but Taylor then lost a couple of spots to Tincknell and Braun when he ran wide at Turn 5.

At the final round of pitstops, the #5 AXR Caddy jumped several places to run third, ahead of Braun, Ricky Taylor and Tincknell.

The man to watch in the final stages was Braun, who passed both AXR cars to grab second – and then a full-course caution came out as Juan Pablo Montoya lost a wheel from the #6 Acura.

The race restarted with 17 minutes to go, with Jordan Taylor leading Braun, Nasr and Albuquerque, as Tincknell passed Ricky Taylor for fifth, a move mirrored by Oliver Jarvis in the #77 Mazda on Taylor a few laps later. But Tincknell went off, causing another yellow with 12 minutes left on the clock – just as Braun passed Taylor for the lead around the outside.

Taylor repassed Braun seconds later, but that was under the yellow, so the positions were redressed with Braun leading.

The race restarted with seven minutes left to run, and Braun rattled off the laps to a famous victory over Jordan Taylor, Nasr and Albuquerque. Ricky Taylor finished fifth, ahead of Jarvis.

In GT Le Mans, Nick Tandy took the lead from pole in Porsche #911, ahead of Jan Magnussen’s Chevrolet Corvette and the second Porsche of Laurens Vanthoor, with Ryan Briscoe (#67 Ford GT) losing two spots in the opening exchanges.

Jesse Krohn took the lead in the #24 BMW during the first round of pitstops, ahead of Tandy and Vanthoor. Tandy and then Vanthoor took advantage of DPi lappery to jump back ahead of Krohn to reinstate the Porsche 1-2.

But the #912 car’s race went south after Earl Bamber took over from Vanthoor at half distance, and following a slow stop, he collided with the #67 Ford GT of Richard Westbrook and later suffered an explosive puncture.

Drama also befell the #911 car when Patrick Pilet, in for Tandy, hit John Edwards’ BMW – sending the latter to the pits. But his biggest threat was the fuel-gambling #67 Ford of Briscoe/Westbrook.

The penultimate yellow allowed Westbrook a ‘free’ pitstop, so he retained the lead and was able to record a sensational win. Pilet then lost places to both Corvettes, with Garcia and Tommy Milner passing him in heavy traffic, and had to settle for fourth.

The #66 Ford of Dirk Muller/Joey Hand finished fifth, ahead of the delayed #912 Porsche.

In GT Daytona, Jeroen Bleekemolen and Ben Keating claimed a fabulous win for Team Riley Mercedes, with Bleekemolen getting past the Lexus of Kyle Marcelli in the closing stages. Andy Lally and John Potter finished third in the Magnus Racing Audi.

Taylor: Losing CTMP victory to CORE LMP2 “out of our control”