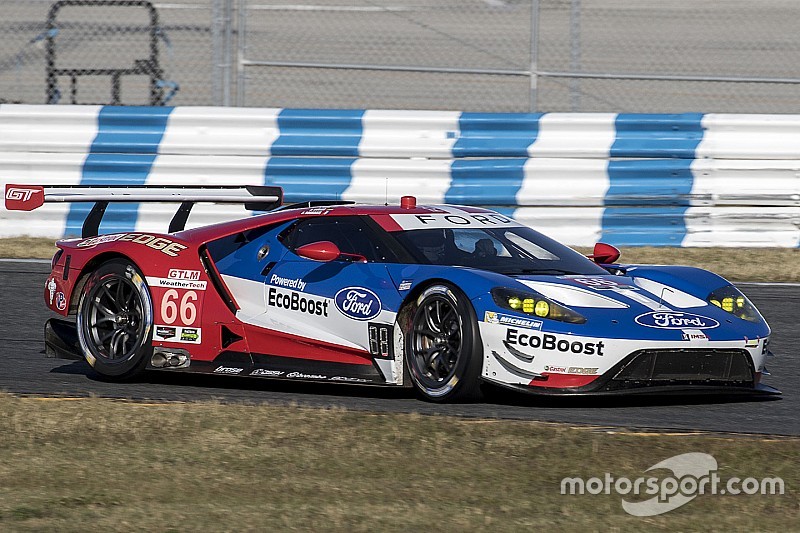 The grid has been set for IMSA's GT classes at Daytona International Speedway.

The GTD category, which makes up nearly half of the 55-car Rolex 24 at Daytona field, were the first cars on track for qualifying.

The 15-minute session went smoothly with no major incidents. Ferrari asserted themselves at the top of the charts with the Alessandro Pier Guidi in the No. 51 Spirit of Race Ferrari. He was trailed by fellow Ferrari driver Alessandro Balzan.

In the final moments, the Scuderia Corsa took a swing at Pier Guidi, cutting out a tenth, but still 0.018 off the top spot.

Pier Guidi, who was part of the GTD-class winning team at Daytona in 2014, put up a time of 1:47.099. Marco Sorensen was fourth in the No. 98 AMR Aston Martin and  Mirko Bortolotti rounded out the top five in the No. #11 GRT Lamborghini Huracan.

The Porsches had control of the speed charts early, but will quickly shuffled down the order by the Ford fleet. Joey Hand went to the top mid-season, trailed by the sister cars of Richard Westbrook and Olivier Pla.

Pla went off at the International Horseshoe, spinning the No. 68 Ford GT with just under five minutes to go. He was able to emerge unscathed, having kept the car out of the tire barrier.

Nobody was able to mount a challenge against the Blue Oval, allowing Hand to come away with the pole at a 1:43.473. Westbrook and Pla made it a sweep of the top three for Ford Chip Ganassi Racing.

Toni Vilander in the No. 62 Risi Competizione Ferrari and Patrick Pilet in the No. 911 Porsche 911 rounded out the top five. The No. 69 Ford GT clocked in sixth, giving CGR four of the top six starting positions.

The popular Corvette Racing entries were never a threat for pole, timing in seventh with Jan Magnussen and ninth with Olivier Gavin.