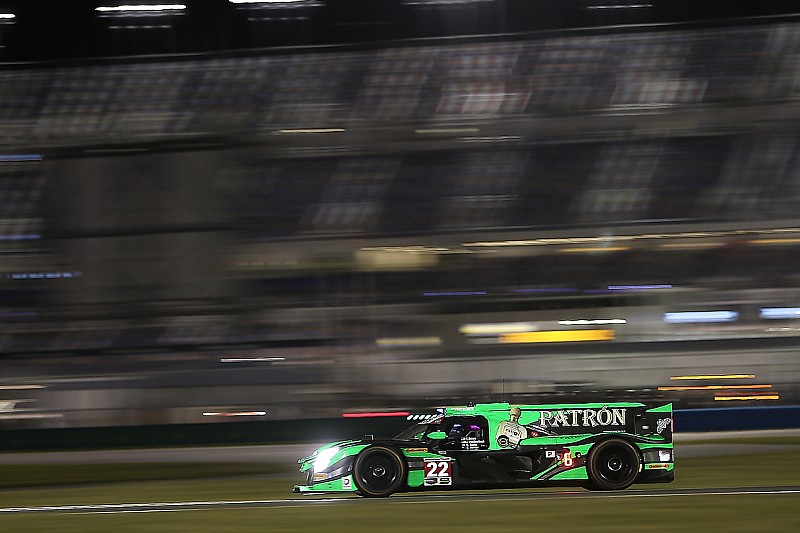 Hartley had just stopped for a new set of wet tires and ran wide twice on the infield on his out lap. Then as he tentatively hit the banking with the car slithering, a GTD Porsche clipped the Nissan and bounced it off the wall. It didn’t look a major hit, but it damaged the steering, and the car sank down to the bottom of the track and ground to a halt as Hartley didn’t feel able to steer it back to the pits. There was then a full-course caution to allow the Nissan to be retrieved on a flatbed.

That allowed Joao Barbosa’s #5 Action Express Cadillac DPi-V.R back into second place albeit a lap behind the Wayne Taylor Racing Cadillac, currently driven by Ricky Taylor.

Renger Van Der Zande in the VisitFloridaRacing Multimatic Riley is third, on the same lap as Barbosa, with Ryan Dalziel in fourth in the second ESM Nissan. Fifth and sixth are the recovering #31 AXR Cadillac with Dane Cameron at the wheel, and the #55 Mazda driven by Jonathan Bomarito. Both are five laps behind the leader.

The two Ford GTs of Joey Hand and Tony Kanaan (#66 and #67) lead ahead of Risi Competizione’s Ferrari 488 with Giancarlo Fisichella in the driving seat. Then comes Ryan Briscoe’s Ford, Frederic Makowiecki and Laurens Vanthoor in the two Porsche 911 RSRs, Billy Johnson’s Ford and Jan Magnussen in the #3 Corvette which has just had a brake pad change.

In Prototype Challenge, Patricio O’Ward’s lead is now five laps although this should stabilize now that Gustavo Yacaman is in the BAR1 entry.