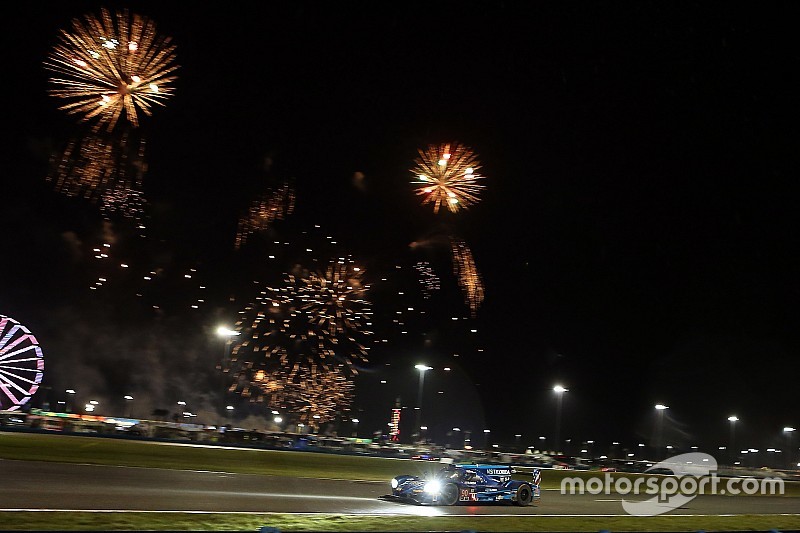 Nearly the entirety of Hour 14 in the Rolex 24 Hours at Daytona was run under caution.

At 3:18am, ET, the tenth full course yellow was called for inclement weather. Rain has been persistent throughout the night, but its recent increase in intensity caused race officials to take proactive measures. Green-flag racing did not resume until 4:12am, ET.

At the sharp end of the field, the No. 90 Visit Florida Racing Riley led the way on the restart, trailed by the No. 10 Wayne Taylor Racing Cadillac. Rene Rast held the top spot through yet another FCY, caused by an incident involving the No. 50 Mercedes out of Turn 1.

On the restart that followed the latest FCY, Christian Fittipaldi drove aggressively on the outside in Turn 1 in an attempt to earn his lap back, but it was to no avail. Rast kept him at bay, but pitted at the very end of the fourteenth hour, giving up the race lead to WTR.

You can't mention GTLM this weekend without including Ford in the same sentence. Billy Johnson in No. 68 was leading, Harry Tincknell in the No. 69 runs second, but they haven't driven away. The Porsche duo, the Risi Ferrari and the No. 3 Corvette are all still on the same lap as the Ganassi drivers.

The restart that followed the eleventh caution of the race proved just how precarious Ford's advantage was. The Porsche drivers went on the attack, overwhelming the Blue Ovals and moving into 1-2. Dirk Werner leads the way now with the No. 911 while Kevin Estre runs second in the No. 912.

The Stevenson Motorsports Audi heads the GTD class right now with Robin Liddell just a handful of seconds clear of Mario Farnbacher in the No. 33 Mercedes. Mark Wilkins holds down third in the Michael Shank Racing Acura.

Not much has changed in Prototype Challenge with Performance Tech holding onto a three-lap advantage over the competition.