DeltaWing drivers and team ready for their hometown finale 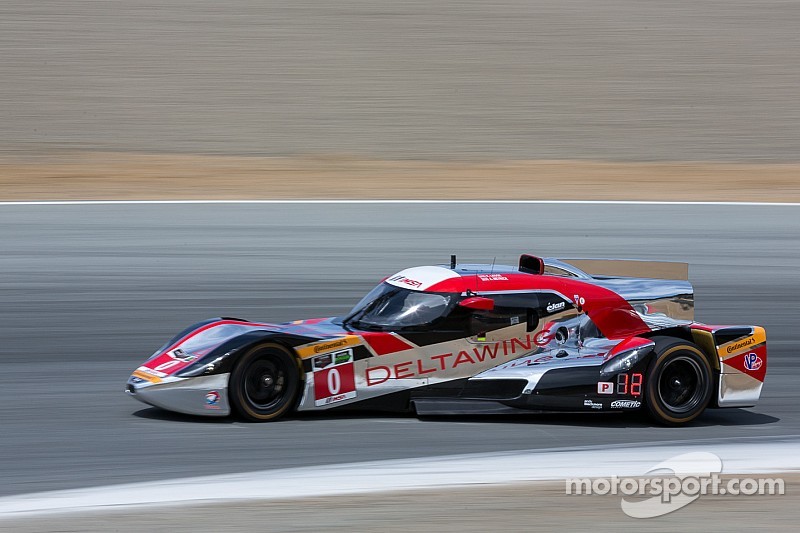 With the shop just up the road, the DeltaWing may have a home field advantage.

A mere six miles separates the DeltaWing Racing Cars shop from the front door of Road Atlanta, home of this weekend’s endurance classic, the Petit Le Mans. The team hopes that the final race of the inaugural TUDOR United SportsCar Championship will be a chance to show friends and family how the months of preparation and hard work developing the revolutionary DeltaWing coupe has paid off.

Added to the mix is the local history of DeltaWing Racing Cars managing partner, Don Panoz. Settling in the Braselton area in the early eighties, Panoz built the first of several world-class resorts, the internationally recognized Chateau Élan. Motorsports fans know Panoz as the former owner of Road Atlanta, the founder of the American Le Mans Series and the creator of the Panoz Esperante that beat factory GT teams at both Le Mans and Sebring. Panoz has been the driving force behind the DeltaWing Racing Cars project and has formed DeltaWing Technologies to develop the race car concept into a road car program.

Fans will notice a change to the DeltaWing coupe this weekend, as the team tests new aerodynamic pieces on the nose and rear of the car designed to increase the car’s downforce and performance.

Returning to the DeltaWing will be the driving trio of Gabby Chaves, Andy Meyrick and Katherine Legge, each coming off their own set of successes in the past month (including the Indy Lights title, second in the Blancpain championship and the debut of Formula E). The drivers – along with team manager Tim Keene – recognize the importance of competing well in front of the hometown crowd.

Team Manager Tim Keene: “Because Don used to own the track and we know the track so well because we test here quite a bit, expectations are a bit higher. We’ve been working on the performance level, not just the reliability over the past few months and we’re to the point where we need to be more competitive in the class. And a lot of that comes down to overall downforce. In order to take the next step, we’re trying new aero configurations to make up our deficiencies in downforce - and we have more changes coming in 2015. We’ve got a new gearbox and new suspension in the works, both of which will be easier to work with and will tidy up the rear of the car. We’re looking forward to seeing how that comes together over the next month.”

Katherine Legge: “It’s good to end the season at our home race, so that the team can show their friends and family what it is that’s been taking up so much of their time and energy! The Atlanta crowds are special to us. Dr. P has been based here for a very long time; it’s where he’s made his home, so it’s one of the most important races of the year for us. And of course, it’s an iconic race at an iconic track.

“The team has worked so hard and been passionately committed to the development of the DeltaWing over the past couple of years. Everyone on this team believes that we are going into Petit with a chance to win, that this can be the DeltaWing’s chance to shine. We’ve worked toward this race for over a year, since we started with the coupe. Legitimately, we have a shot to win. We’ve always been about efficiency, so we’ve been working on the reliability. It is a development project, just like the new road car project. It’s about being faster, stronger and more efficient. We’re getting there and everyone’s very excited. I think we’re all going into it wanting to win so much; it would be a fantastic way to finish up the season and buoy everybody for the off season.”

Gabby Chaves: “Road Atlanta is my favorite American track. It's a rhythm track; it just flows. You're dancing with the car. It's not a slow dance, it's a little devil dance - one misstep and everything goes wrong. You're on the edge and I love it. I'm especially excited because the development we've done over the past few months has really started to pick up strength and show results. I'm excited to see what we can do on the track, especially since it's the home race for the crew and the team. I'm looking forward to getting out on track and getting a good result in the race.”

Andy Meyrick: “I haven’t driven the car with the new aero bits, but the car proved in its last outing at Road America that it can run a strong race and we know the track is a strong circuit for us. But there are 54 cars on the entry list and it’s a 10-hour race. We need to be quick in traffic, we need performance over the stints, a car that’s easy to drive and to get good fuel mileage. If we do that, we’ll be there at the end.”

Three practice sessions are on Thursday’s schedule, with a fourth on Friday morning. Prototype Class qualifying will be broadcast live on IMSA.com at 5:25pm ET. Petit Le Mans, the final race of the 2014 TUDOR United SportsCar Championship, takes the green flag at 11:15am ET Saturday on FOX Sports 2, with a two-hour race recap to air on the main FOX network on Sunday (check local listings.)