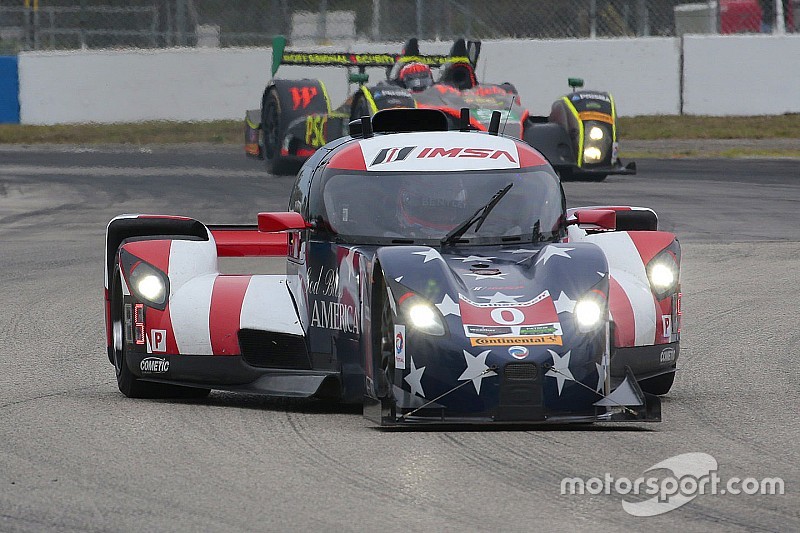 Sebring, Fl. Mar. 19, 2016 – Panoz DeltaWing Racing had to end the race 17 minutes early due to a problem in the steering box causing the steering to fail. The DeltaWing lost all steering and therefore was unable to continue around the 17-turn Sebring track.

The day started well with Andy Meyrick taking the car from P11 to P4 in a double stint that was comparatively uneventful. As Katherine Legge took over, the skies opened and the thunderstorms that were forecast descended. The race continued and Legge put on a strong performance through the very difficult conditions before officials put out a red light about an hour in due to the imminent risk of lightening and the standing water on track. The session restarted and Legge returned to the wheel for a further 52 laps.

At seven hours 19 minutes in, Sean Rayhall took over and as the pace increased, Rayhall drove the DeltaWing’s fastest lap of the race in 1:54.766. With two hours and 15 minutes remaining and in P7, Meyrick got back behind the wheel and drove an exciting finish, reaching P6. Unfortunately, 17 minutes prior to the end of the race, an issue occurred within the steering box and Meyrick lost all steering rendering him unable to complete the race.

Andy Meyrick: “My first stint was quite good, going from 11th to fourth. The car was quick, consistent, trouble free – it was a perfect stint, really. There were no issues whatsoever. I got out at exactly the right time, given the issues with the weather. It was tough conditions in the middle of the race for everyone. I got back in at night with the plan that I would run a triple stint to the finish. We struggled with visibility issues through the entire stint, with oil that we couldn’t get cleaned off the windscreen. Still, we were on the lead lap and running well.

But with 17 minutes left and during a full course caution, I was running a normal line at normal speed into Turn 1 and at the apex, the steering locked up and snapped. Fortunately, I didn’t hit anything but I couldn’t bring the car back, since the steering was broken. It’s a real shame. I’m really impressed by the job the entire team did to get us this far and I’m very disappointed not to finish. But to be in a position to finish on the lead lap here at Sebring – a circuit that is not a strong one for the car – is a testament to everyone’s efforts and it bodes well for the rest of the season.”

Katherine Legge: “It was a very eventful race for us with challenging conditions and I think everybody exceeded expectations. I am extremely proud of the team for fighting until the last 17 minutes when we unfortunately were forced to retire. We have improved so much and will take the positives. I look forward to the rest of the season.”

Tim Keene: “Unfortunately the result did not speak for the day that we had. We overcame minor issues, the crew did a fantastic job and never gave up and to be on the lead lap competing for seventh place with 18 minutes to go, speaks volumes for how much the program has turned around. Looking forward to going to California for Long Beach and Laguna Seca.”