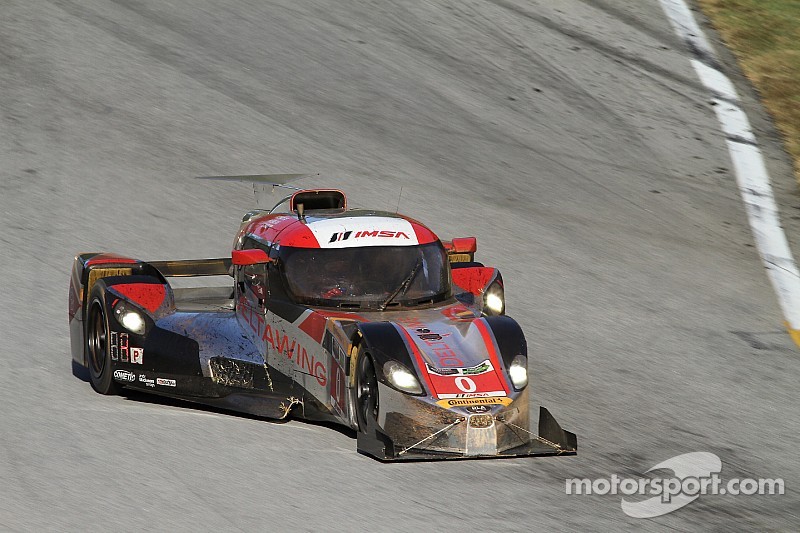 Problems, crash prevented a finish even better than fourth overall.

Friends and family who came out to cheer on the Braselton-based squad saw the car race near the front of the field for the entire event, overcoming the loss of first and second gear with three hours remaining in the endurance classic. All three drivers put out the maximum effort to save fuel, stay with the leaders and keep the gears in order all the way to the finish.

Legge took the green flag from a fifth-place starting position, staying with the lead group and fighting for position throughout her double stint. Holding the second quick lap of the race for much of the early going (the car’s fastest lap of the weekend, a 1:14.830 on lap 26), Legge took the lead as the rest of the Prototype class cycled through pit stops, using the revolutionary coupe’s efficiency to her advantage. Legge handed the wheel to Chaves in fourth position. Chaves proceeded to take the lead on the next round of pit stops during a caution period, holding the top position for 12 green flag laps and 15 total laps.

Meyrick took over in the fourth hour, coming out of the pit lane in fifth position and quickly working his way into second.  His closest call came late in his stint, as Meyrick and the #42 OAK Racing prototype came together in turn one. Given that a light on the nose of the car had failed early in the race and would require fixing before nightfall, the team decided to make sure there was no damage to the new aerodynamic splitter from the incident, changing the nose on the next pit stop.

Legge’s returned to the race with the car in fourth position and enjoyed a relatively quiet stint interrupted only by a piece of rubber that temporarily lodged in the steering mechanism and a windscreen covered by oil from another car. Legge handed over to Chaves in the six o’clock hour, with Chaves immediately coming to grips with gearbox issues, losing second then first gear with over three hours to go in the race. Chaves and Meyrick combined to find the delicate balance between maintaining position, saving fuel and nursing the car to the finish. Meyrick took the checkered flag in fourth position after 10:01.32 hours and 395 laps.

The team now turns its focus to the 2015 TUDOR United SportsCar Championship, with a host of updates to the innovative coupe along with a new team transporter to take them into the future – a future that looks bright indeed.

Katherine Legge: “The first stint was relatively trouble-free. It was a bit difficult only because we were quicker than the DPs at that stage, which was frustrating. For the first three hours, we really thought we were in with a chance of winning. My second stint was pretty drama-free, though green all the way through. I had to be gentle on the brakes and then some rubber got caught in the steering, which was a bit scary. But you never have a 10-hour race that’s trouble free, you have to suck it up and get on with it. But the team did a really good job, we’re proud of fourth. We’ve worked on reliability, we’ve worked on speed and the last race of the season has been our best from both of those aspects. We’ve made some great improvements this season and we know where we need to improve further. We’ve got some parts coming and some winter testing that will make us even stronger, reliability wise. If we can keep the pace we’ve got, we can compete every weekend.”

Gabby Chaves: “As soon as I started my stint, we realized we didn’t have first or second gear. I told the guys that third and fourth and fifth were usable so we decided that since we were barely three hours to the finish, there was no reason to go to the garage if we could still run. It didn’t give us optimal lap times by any means, but I did the best I could. The car was handling really well so it’s a shame, because I think we could have been really competitive. But the team did a great job, giving me the best pit stops I’ve had all year, it was an amazing job by everyone. We were really consistent, so a fourth place finish is great. We’ve had a competitive car all weekend and we showed that we could be a podium car. The pace is there, it’s just managing the small variables.”

Andy Meyrick:  “It’s a challenge, with three gears and trying to save fuel and keep the car in fifth place until we got fourth. You just have to know when to push and when to save fuel. But they’re never enjoyable stints! But the car was very good – the takeaway is that we had a very fast racing car. In the areas we could push, we were as fast as anyone. It’s unbelievable. It feels very special, to be perfectly honest, to finish a 10-hour race in fourth position with so much competition. The changes we’ve made since Road America have given us a very strong result, we need to keep tweaking the car and keep making improvements over the winter so we can be even more competitive next year.”

Team Manager Tim Keene: “It’s a good result for us. I think we all expected a bit more but at the end of the day, we got the finish. To come that close to finishing on the podium was great, I’m really proud of everyone at DeltaWing and Élan. I’m really looking forward to getting the new components because you can really see the potential of the car now. We can really compete with these guys – we probably opened a lot of eyes today. We lost second gear with over three hours to go, so we could only run third through fifth, which is a really big compliment to the drivers, to get it done and to make the thing live that long in such a long race. We were strong and we were competitive. It’s time to tear everything down, wait for the new components, the new trailer – there’s a lot of work to be done before the first race!”