Dempsey Racing gets a feel for Sebring with solid Thursday practice

With the first day of on-track activity complete, Dempsey Racing is busy preparing for Saturday’s 62nd Running of the Mobil 1 Twelve Hours of Sebring. The No. 27 Porsche 911 GT America, and the No. 28 Dempsey Racing/Konrad Motorsports sister entry, both completed laps in the opening practice sessions at the 3.74-mile circuit. After completing a test at the famed circuit last month, the teams looked to build on the data gained during those sessions while preparing for this weekend’s brutal endurance event. 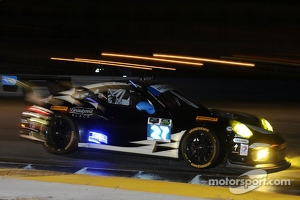 “As often happens at Sebring, you test here and come back a few weeks later to find that the track is entirely different,” Joe Foster, long-time Dempsey Racing co-driver, said. “Our Dempsey Racing teams are working through a few balance things. Additionally, the rule package has been changed in two different areas since the test, so we are also busy trying to adapt to those changes. The circuit here at Sebring International Raceway is just very difficult. The course is very technical for a driver. It’s much different than Daytona where there are basically only three corners. However, since this is a much more difficult track to drive and set up a car, it also means that much more to a team and driver when you do well.”

Andrew Davis, who will co-drive the No. 27 Dempsey Racing Porsche 911 GT America with Foster and team owner Patrick Dempsey, also expressed how the age of the track adds to the difficulty of Saturday’s endurance event.

“The 12 Hours of Sebring is an extremely demanding event, and the physicality of the bumpy circuit makes it as difficult as any 24 hour race,” Davis said. “The GTD class is stacked with strong teams, but I am extremely optimistic with the package we are developing on the No. 27 Dempsey Racing Porsche GT America. We are up for the challenge of being the team representing the Porsche marque on the top step of the podium on Saturday night!"

Magnussen ready to bounce back at Sebring with Corvette