SEBRING, Fla. – Dempsey Racing completed a successful test at Sebring International Raceway Thursday and Friday with the team’s No. 27 Porsche 911 GT America and the similar No. 28 Dempsey Racing/Konrad Motorsport sister entry both posting steady lap-time reductions over the course of the two-day session. This year’s edition of the annual Sebring “Winter Test” was once again in preparation for the upcoming Mobil 1 Twelve Hours of Sebring, March 12 – 15.

By the end of the fourth and final session of the test Friday afternoon with Davis and Foster, the No. 27 had notched a best lap time of 2:06.017 (106.843 mph). In total, the No. 27 cracked the top 10 in three of the four test sessions but Davis feels the car had even more untapped potential. 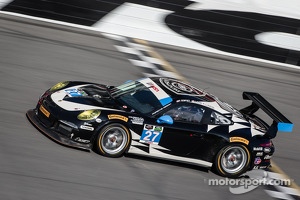 “Sometimes the lap times aren’t indicative of what we can do,” Davis said. “On the last run, for example, we were quicker than we were yesterday, but we were on old tires, just trying to tune the car for the race. It’s easy to go for the lap times sometimes, but you’ve got to think big picture. You want a car that’s easy to drive for the extent of the race.”

Foster was also pleased with the team’s performance, especially in light of the relatively short time the drivers have had to acclimate themselves to their new ride. Dempsey Racing is campaigning new 911 GT Americas built on Porsche’s 991 vehicle platform in 2014, a switch from the 997-based cars used in recent seasons.

“A lot of the 991 teams were here prior to Daytona,” Foster said. “We didn’t receive our cars in time for that, so this is our first time here, and we’re a little bit behind the eight ball. Obviously some people have more resources and have had more time to test, but we’ll catch up.”

The historic 3.74-mile Sebring circuit is notorious for taking a toll on the cars and drivers that run there, a fact not lost on the Dempsey Racing pilots.

“It’s very bumpy, and that wreaks havoc on the car in general,” Davis said. “So you have a lot of part failures here. From a driver’s perspective, it’s jarring, it’s physical, but it’s also a ‘combination of skills’-type of track. You’ve got heavy brake zones, very fast corners, medium-speed stuff, passing opportunities and you’ve got to work with traffic. That’s why the 12 Hours of Sebring is such a legendary event, because it’s one of the most difficult tracks in the world. Sebring is definitely a ‘litmus test.’ It’s a much more technical track than Daytona. There are more actual corners and braking is at a premium.”

Young German talent Christian Engelhart handled the majority of the No. 28’s testing and steadily whittled lap times down to a team best 2:05.491 (107.291 mph). The lap, turned in Friday morning’s third session of the test, was good enough to crack the top-10 overall GTD times recorded during the test. The showing was all the more noteworthy considering that the German driver had not raced at Sebring previously.

“It takes longer to get used to than a normal track,” Engelhart said. “It’s not easy to judge how much the car is going to jump over the bumps. You have to drive longer and do more laps to get used to it.”

Still, Engelhart was heartened by the amount of progress the team made over the course of the test session.

Next up for Dempsey Racing is the IMSA TUDOR United SportsCar Championship Mobil 1 Twelve Hours of Sebring, March 12 – 15, at Sebring International Raceway.

GMG concludes Sebring test as one of Audi’s top contenders