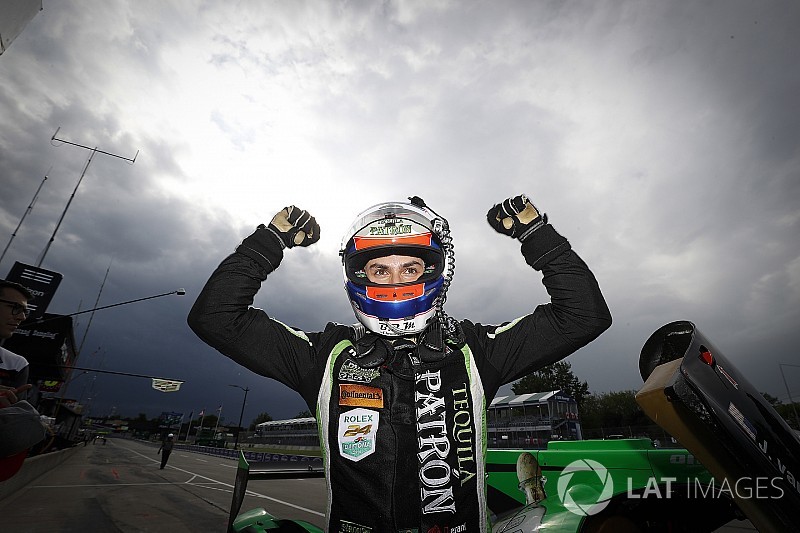 A red flag meant a truly strange ending to the IMSA Prototype qualifying session at Belle Isle in which Pipo Derani took pole, while Bryan Sellers was sensational in the GT Daytona class.

The start of the session was delayed slightly for track repairs, so in order to meet the track’s 6pm curfew, the two classes had their sessions reduced to 12mins.

When Robert Alon smacked the wall in his JDC Miller Motorsports Oreca and sprayed debris over the track, there were barely four minutes remaining, and Helio Castroneves’ Acura and the two Mazdas drove to pit out rather than their pitboxes.

That’s against the rules, so they needed to serve a drive through penalty, effectively ending their chance of going for pole.

Instead, Derani nailed an excellent flying lap to take pole ahead of Juan Pablo Montoya in the other Acura, while Castroneves will have to be content with third place, using his time before the session stoppage.

Fourth and sixth will be Joao Barbosa and Eric Curran in their Action Express Racing Cadillac DPi-V.Rs, sandwiched between them will be Misha Goikhberg in the other JDC-Miller machine.

Renger van der Zande was seventh fastest in the Wayne Taylor Racing Cadillac, so will start ahead of the Mazdas whose unrepresentative times leave them languishing in eighth and ninth.

They’re just ahead of the second ESM Nissan of Scott Sharp who received a rude nudge in the backside from Castroneves during the Brazilian’s desperate attempts to find a clear track.

The GT Daytona class was missing one of its best entrants, Magnus Racing, due to Andy Lally suffering a catastrophic engine failure in the second practice session.

But the remainder put on a strong showing, thanks to an exciting battle between the Paul Miller Racing Lamborghini Huracan of Sellers, and the two Acuras and Lexuses.

However, Sellers put pole beyond doubt with his seventh lap, clocking a 1min28.942sec, 0.448sec faster Katherine Legge’s Acura and 0.775 ahead of the second NSX of Justin Marks.

Ben Keating produced a solid effort to take sixth in the Riley Motorsports Mercedes, ahead of Michael Schein in the Wright Motorsports Porsche 911.