Dion von Moltke: from zero to hero in Detroit 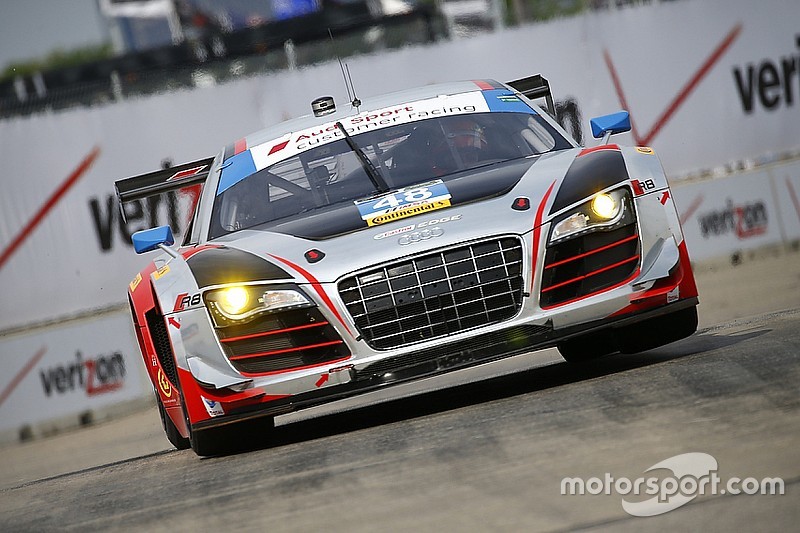 Three long weeks after stepping off the podium at Laguna Seca we were finally on our way to Belle Isle for the Detroit Grand Prix.

Our week started on Wednesday night when I went to an Audi dealer event at the Fred Lavery dealer.   Paul Miller Racing brought our Audi R8 LMS to the dealer event which is always a fan favorite.  We spent the night speaking about the challenges that the street circuit at Belle Isle presents.  For me the Audi PR events are always a nice way to start a weekend as it helps get you more focused on the weekend coming up.

I have always enjoyed connecting with people who are car fanatics who may not know much about the Tudor Championship as their eyes light up at the thought of Audis vs. Vipers vs. Ferraris and many other cars. That night we had a very enthusiastic group and I hope they all had a great night hanging out with us.   But enough of that, let me get into what was a very important weekend for us as a team at the Detroit Grand Prix.

Getting to know the track

Detroit is known as a very technical and tricky street circuit, with some very quick corners.  At the exit of turn two we can literally jump the car at the top of third gear, which is close to 80 mph.  You have to really judge your speed and trust the car as it pushed you out very close to the wall. We knew that the track was going to be repaved from last year and that was a point of focus for us as a team. They had repaved the track on the back straight, as well as the final two corners.

On Thursday Chris and I took out our golf cart to drive a few laps around the track.  We chose to drive a golf cart rather than walk for two reasons: first we had a very short amount of time and we wanted to see the corners more than just once, which is all you get if you were walking; second, we also wanted to get an idea at how bumpy the new sections would be, which you may be able to feel a little more driving a golf cart.  After driving around for three laps we still weren’t exactly sure how it would feel. The new sections looked like they would have low grip but we needed to wait until our first practice Friday to tell.

We went into Friday ready for a long day, but it turned out to be longer than any of us were expecting.  We had two practice sessions, the first one at 8:45 in the morning, and then qualifying that night at 5 pm.

It’s always very difficult to show up and qualify on the same day, as it doesn’t give drivers a night to sleep on things and really think about our driving.  Chris and I had a lot of faith in the setup our engineer, Dave Fullerton, would give us on our Audi R8 LMS, so we wanted to really focus on our driving by really learning the track during the first free practice.

We decided to split up the session into 20 minute segments to give us about 12 laps of driving, then get out of the car to think about things and look at data, and then get back in.  This ended up working really well and we ended the first session in second place.  Our Audi was feeling great in the dry conditions, but the weekend forecast was looking very wet.

This was my moment to give the guys something to smile about after a very long day.

Sure enough about 10 minutes before our second free practice the rain came. The sessions started off in light rain that was just hard enough for us to need rain tires.  I got a quick five lap run, and then as the rain continued to strengthen Chris got a five lap run.

We decided to sit and wait while the rain was coming down very hard.  Once it lightened up we had a team discussion about whether or not to go out, with the weather on race day looking very likely for rain we decided to go out and see what we could learn in the conditions.  Unfortunately not long after, I hit one of the big bumps on the circuit, which caused the car to aquaplane at high speed and sent the car into the wall.

Tough afternoon for the team

With only two and a half hours until qualifying, our guys had a ton of work to get done. Qualifying on a street circuit is more important than ever because of how difficult it is to overtake, we knew we needed to make that session and do well to get a good result for the race.

Once the car got back to the garage, the guys at Paul Miller Racing, with help from Audi Sport Customer Racing, showed how efficiently the whole team works. They were all over the car, and just two short hours later the car was not only ready for qualifying, but it looked brand new.

Five minutes before the start of the session we were rolling onto pit lane, and it was now my turn to show the guys all of that hard work was worth it. This was my moment to give the guys something to smile about after a very long day, qualifying today was more about team spirit than starting position. After the green flag flew for our 15-minute battle for pole I could feel right away that the car was handling well.

The Audi R8 is a car that gives a driver confidence to push right away so it did not take me long to get over the practice crash and back into the flow of attacking this bumpy street course.  After a few power slides that were bigger than I would like, the tires were up to temp and I was able to put a few laps together good enough for the pole position.

For me to see the smiles on all our guys’ faces meant everything. The team aspect of motorsport is still not talked about enough and if there was ever an example of a true team result, qualifying was that.

As we woke up raceday morning the weather reports were all over the place, what once looked like a definite wet race now could be dry. As we started our engines after the command, it was sunny and barely any clouds in the sky - a beautiful day.

I got a nice start and was able to hold the lead and control the pace from the front, but as my stint continued I could see the sky getting darker and darker.   Our plan was for me to try and push hard for my stint to open up a gap and give us a big enough lead for Chris to control the gap for the second half of the race.  Unfortunately once I was finally able to get a lead of a couple of seconds the full course caution came out and killed any gap we had.

We knew the pitstop would be vital, so throughout the weekend Chris and I worked hard on our driver changes. We decided that I would not wear a cool suit, and also not drink too much so we did not need to change a drink bottle in order to make our driver change as fast as possible. With the race being a shorter 100 minute race we did not need a full tank of fuel at the pitstop so it would be testing us as drivers and our tire changers.  We came onto pit road with the whole GTD field together, Chris and I had a good driver change and our tire changers nailed the tire change.

Unfortunately per the rules, our Audi takes a little longer to refuel and we lost one position in the pits, and one to a car who was able to pit before the full course caution.   Chris would restart in third with just under and hour to go in the race and it would be in some of the toughest conditions imaginable for a street course. On and off rain started but never hard enough to go to full wet tires, every car continued on slick tires. For him, every lap the level of grip at each corner would be different and he did a fantastic job to bring the car home in third place after very tough battles through those conditions.

Accident after the checkered flag

Unfortunately before we could do any celebrating, there was a very unfortunate accident.  The last two laps the rain became very hard and the series decided to handle a car that was crashed and parked on the outside of turn one with a local yellow.  As soon as the checkered flag came out there was a safety truck on track to tend to the crashed car.  Even in the best weather conditions I don’t believe a safety truck should ever be on track with cars going flat out.

Only during a full course caution should they ever be on track.  But this was in semi-wet weather with guys on slicks so it was a very bad idea.  Unfortunately some cars lost control right after the checkered flag and slammed into the safety truck.  It was a violent accident and unfortunately one of the track workers who help keep us safe was injured.

I just want him to know the thoughts of everyone in the paddock are with him and we all hope he makes a full recovery.  I hope we all learn from this and we never see any safety vehicles on track unless the track conditions are safe for them, which means full course yellow conditions.

A very long and rough weekend for everyone on Paul Miller Racing, but a very nice finish and good points for us so we were happy with the result.   Now I get back to Miami just in time to take a calculus test. After that I will be spending a lot of time prepping for our next race at Watkins Glen.

Dion von Moltke is the driver of the Paul Miller Racing #48 Audi in the TUDOR United SportsCar Series, and is a regular contributor to Motorsport.com