Rum Bum Racing went back to work this weekend as the team looks to not only return to victory lane at Daytona International Speedway, but also make progress towards a third consecutive IMSA Continental Tire SportsCar Challenge Championship.

Following a quick turnaround from the holiday season, Rum Bum Racing went back to work this weekend as the team looks to not only return to victory lane at Daytona International Speedway, but also make progress towards a third consecutive IMSA Continental Tire SportsCar Challenge Championship.

With a mixture of old and new, the team struck a great balance over the weekend and is prepared to take on the challenge of the new IMSA era.

With three days of testing for the Roar Before the 24 test at Daytona International Speedway this weekend, Rum Bum Racing was in full force as the team took to the track with two entries.

Leading the effort was the defending champion No. 13 Rum Bum Racing Porsche 911 with Matt Plumb and Nick Longhi behind the wheel, with the sister No. 03 BMW M3 being shared by Rum Bum Racing newcomers Hugh Plumb and Kaz Grala. The BMW hadn’t been used in anger for quite some time, and arrived to the test fully prepared as Rum Bum Racing fans have come to expect.

"It was important for us to bring the BMW to give us a kind of baseline of where everybody really is,” said Matt Plumb. “And to be able to dust this thing off after sitting for two years and have it be top-two and top-three on the time sheets every time we tried to go fast shows us that we have a lot to look out for this season.”

Laying down over 200 laps throughout the three day test gave the Rum Bum crew valuable information and experience going into the opening race of the season, and the entire team feels confident in their ability to contend with the field and finish the race well. 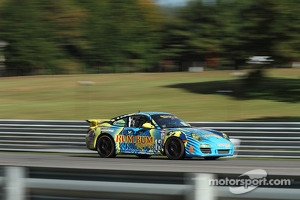 Although the Rum Bum crew comes into this season with two consecutive championships under their belts and a great amount of familiarity among the team, they are by no means taking anything for granted and know what it will take to get that elusive top spot on the podium at the BMW Performance 200.

"With all the years that this team now has worked together, it is comfortable--but there is no complacency--we are just as motivated as the first day we showed up here in Daytona four years ago,” added Plumb. “Everybody knows how everybody else works and as I have said before, everybody had been so familiar with everybody from the moment we started this deal.”

Grala, who is the 15 year old son of former Daytona Prototype pilot Darius Grala, set a new mark as the youngest to participate in an IMSA event at Daytona International Speedway. But the outing was no mere statistical exhibition run, as the youngster was right on the pace with the BMW as he soaked up as much guidance as he could from his experienced co-driver Hugh Plumb.

"This week was awesome! I have never raced on this track, never driven it and actually never even seen it until this week,” said Grala, who also was in short track action on Saturday night at the fabled New Smyrna Speedway just down the road. “I had also never been in this car before so it was a whole new experience for me. I had a little bit of experience with the heel-toe downshifting, but not much at all. I was never able to do it really smoothly until this weekend. I got really comfortable with it because this track has a lot of heavy braking zones and downshifts. Really I have just been having fun out there this weekend."

Hugh Plumb, who has won in IMSA with brother Matt as his co-driver, was impressed with what he saw in his first outing with Rum Bum Racing.

"First of all what a privilege it is to drive with such a team of absolute champions,” said Hugh Plumb. “They prove it on and off the track. So it is a huge privilege to be able to drive with them and hopefully we can continue the relationship. My co-driver, Kaz Grala, did an amazing job, and a big thanks to Luis Bacardi and my brother Matt Plumb for giving me this opportunity today."

With such a big weekend, it was understandable that Grala could hardly shake the grin from his face.

"It was huge to be able to partner with Rum Bum Racing,” said Grala. “Everything from driving tips, downshifting tips, just everything. These guys really helped out and they seriously know what they are talking about, obviously coming off of two championships they are no slouches."

Rum Bum Racing will be back in action in three weeks’ time for the BMW Performance 200 at Daytona International Speedway January 25.