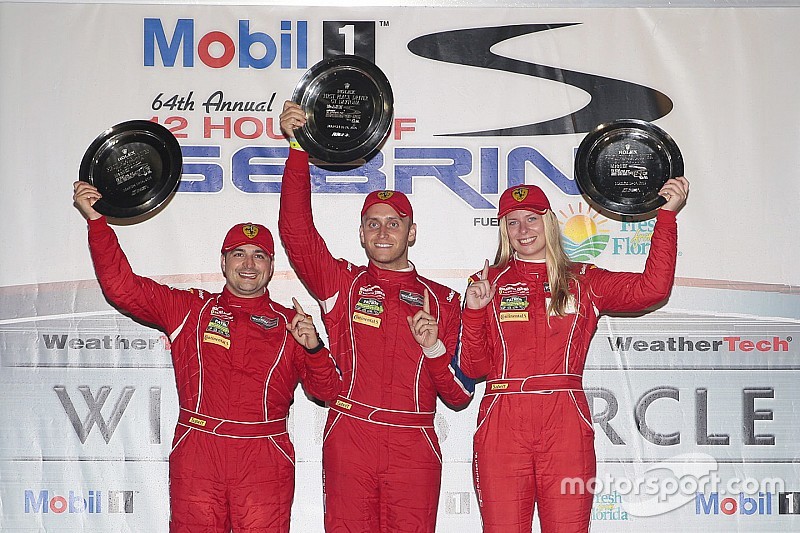 To be a part of the first race, and the first win, for the 488 GT3 is an incredible feeling – and it is even more amazing that it is Sebring!

The no. 63 Scuderia Corsa Ferrari 488 GT3, which was qualified on pole position by Segal, led the early stages of the race before falling down the order due to incidents and changing conditions. However, strategy by the team and the speed of the Ferrari enabled the drivers to move up the order in the second half of the race, with Balzan taking the lead of the GT-Daytona class in the closing minutes of the race.

“I am really, really happy to help Ferrari and Scuderia Corsa to win this race,” said Balzan. “To be a part of the first race, and the first win, for the 488 GT3 is an incredible feeling – and it is even more amazing that it is Sebring! It is a great honor to be another Italian to win at Sebring driving a Ferrari, as Castellotti did sixty years ago.”

Another Ferrari led the GT-Daytona class at various parts of the 12-hour contest. The no. 51 Spirit of Race Ferrari 458 Italia driven by Matteo Cressoni, Raffaele Gianmaria and Peter Mann ultimately finished in ninth position.

In the GT-LeMans class, the no. 62 Risi Competizione Ferrari 488 GTE and drivers Giancarlo Fisichella, Davide Rigon and Toni Vilander narrowly missed the Sebring podium after running near the front of the class throughout the race. Finishing in fourth position, the team scored the DEKRA Green Challenge Award which is presented to the most environmentally clean, fast and efficient GT-LeMans competitor at each IMSA SportsCar Championship event.

The no. 68 Scuderia Corsa Ferrari Ferrari 488 GTE driven by Andrea Bertolini, Alessandro Pier Guidi and Daniel Serra overcame a minor issue in the early stages of the race to finish in seventh position in GT-LeMans.

The next race for the IMSA SportsCar Championship will be the Grand Prix of Long Beach on April 15-16.