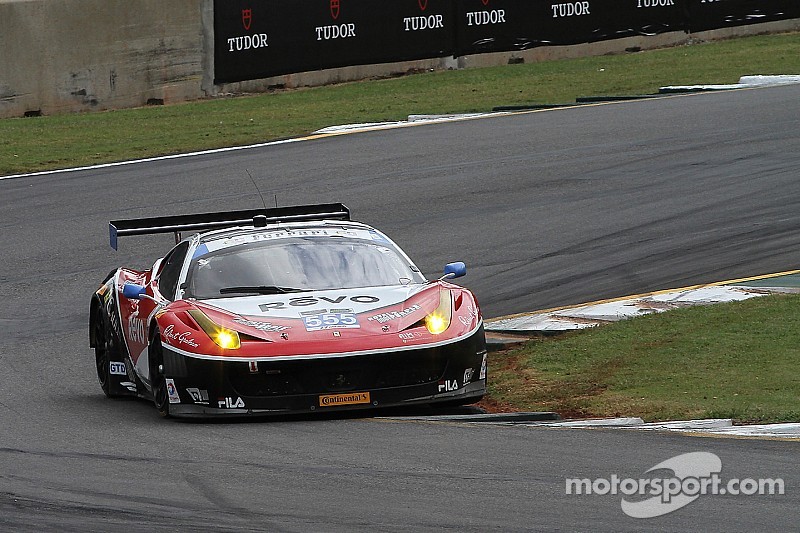 The NAEC championship is made up of the combined 52 hours of racing at the TUDOR Championship’s endurance contests at Rolex 24 at Daytona, Mobil 1 12 Hours of Sebring, Sahlen’s Six Hours at the Glen and Petit Le Mans with points scored at intervals of each of those races. Points scored by the no. 555 AIM Autosport Ferrari 458 Italia, which was victorious at Daytona and finished second at both Sebring and Watkins Glen, as well as the no. 63 Scuderia Corsa Ferrari 458 Italia, propeled Ferrari to the championship.

In the 2014 TUDOR Championship, the Ferrari 458 captured five victories – two in the GT-LeMans class (Road America, Virginia International Raceway) and three in the GT-Daytona class (Daytona, Detroit, Indianapolis). The NAEC championship is the third major North American championship for the Ferrari 458 Italia after winning the 2012 and 2013 Roles Sports Car Series titles.

At Petit Le Mans, the no. 62 Risi Competizione Ferrari 458 Italia was eliminated from the race due to contact by another car in pit lane. The car, started by Giancarlo Fisichella and taken over by Pierre Kaffer, was in contention for the lead of the class. As a result of the incident, Olivier Beretta was unable to drive the car. The no. 57 Krohn Racing Ferrari 458 Italia of Tracy Krohn / Nic Jonsson / Andrea Bertolini finished in ninth position in the class.

In the GT-Daytona class, the no. 51 Spirit of Race Ferrari 458 Italia of Pasin Lathouras / Matt Griffin / Michele Rugolo was the highest-finishing Ferrari in sixth position. The no. 555 AIM Autosport Ferrari of Bill Sweedler / Townsend Bell / Conrad Grunewald, which secured the NAEC title for Ferrari by leading the race at the four-hour mark, ultimately finished in seventh position. The no. 63 Scuderia Corsa Ferrari 458 Italia of Alessandro Balzan / Brandon Davis / Kyle Marcelli / Jeff Westphal finished in ninth position.

While several notable examples of the Ferrari 458 Italia will be displayed during Ferrari North America’s 60th Anniversary celebration on October 11-12, 2014 in Beverly Hills, a special example will cross the auction block for the first time. The first example of the 458 Speciale Aperta will be auctioned on Saturday, October 11 during the Gala Event held in front of the Beverly Hills City Hall. The auction will benefit “Daybreak” the American branch of the Italian charity whose mission for nearly 25 years has been to advance research towards a cure for rare genetic diseases in children.