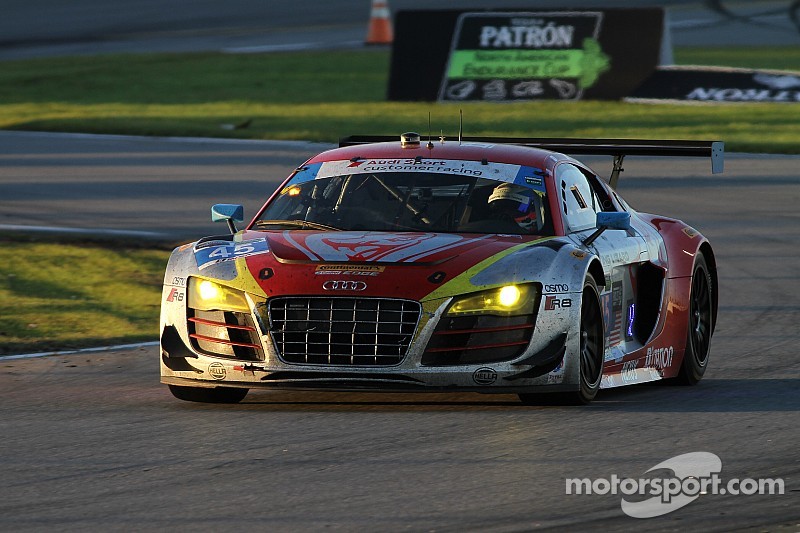 The team currently has five podium finishes at the legendary endurance event.

Sonoma, Calif. - This month, Flying Lizard Motorsports will return to Sebring International Raceway to compete in their twelfth 12 Hours of Sebring TUDOR United SportsCar Championship endurance event. The team currently has five podium finishes at the legendary endurance event, and will return to fight for another win with a new driver line up. Racing the No. 45 Audi R8 LMS will be former Flying Lizard driver Marco Holzer, current driver Robert Thorne and newcomer Colin Thompson.

Holzer returns to Flying Lizard for the endurance event, previously racing as a factory driver with the team in 2011 and 2012. Racing in Flying Lizard's legendary Porsche era, Holzer celebrated many moments with the team, including a 4th place finish at the 24 Hours of Le Mans. The 2015 event will mark Holzer's third 12 Hours of Sebring with the team, and first time racing the Audi R8 LMS.

I've been such a fan of Flying Lizard Motorsports for so long. I'm excited to fly their colors and hopefully do them proud.

"I'm very excited to return to Flying Lizard Motorsports since I have known the entire team for a long time," said Holzer. "The Flying Lizards have achieved a lot of successes. The team has a strong team spirit and they all keep going in the same direction with the same goal. Being able to drive the 12 hours of Sebring with them again means a lot. I have already been racing in Sebring very often and it certainly helps me to feel confident with the track. So far, I have received a lot of information and data about the car which helps me a lot to prepare myself. I'm very much looking forward to getting in the car and going racing."

Equally excited to compete in the event, American Robert Thorne will be racing in the endurance event for the first time. This year The Colorado native previously raced the 24 Hours of Daytona with Flying Lizard Motorsports in the Audi R8 LMS, and has tested the team's Pirelli World Challenge McLaren 650S GT3R on the Florida road course.

"I had never been on the track before a few weeks ago," said Thorne. "However, being able to at least take the McLaren around Sebring and to get some laps in really helps, as well as and learning from my Pirelli World Challenge teammate, Kevin Estre. He's done a lot of laps around that track and got me up to speed pretty quickly so it shouldn't be an issue there. I know the car now pretty well after doing many hours in it at Daytona, so we should have a strong line up and be ready to fight for the win."

"I'm looking forward to the 12 Hour. Obviously with two strong teammates on board we should be able to bring the car home strong in a strong position."

Rounding out the line-up is young American Colin Thompson, who will also be a new face at the 12 Hours of Sebring. Currently racing full time in the GT Cup class in Pirelli World Challenge, the young racer already boasts an impressive resume, having won the 2014 Championship in the IMSA GT3 Cup Challenge by Yokohama and starting the 2015 season well with a win in both GT Cup race rounds at the Pirelli World Challenge season opener at Circuit of the Americas. Thompson has also enjoyed previous success at Sebring International Raceway, and is looking forward to getting behind the wheel of the Audi R8 LMS.

"From what I understand the car has a lot more aerodynamics and assists than what I'm driving now," said Thompson. "I love Sebring. It's such a fun track. It has a little bit of everything; fast corners and slow, technical corners, so it's definitely not a track that you'll get bored at. I've been such a fan of Flying Lizard Motorsports for so long. I'm excited to fly their colors and hopefully do them proud. It's a really good team and we've got an amazing driver lineup. I think we have all the tools to do well. I'm stoked!"

"We are really looking forward to the Mobil 1 Twelve hours of Sebring," said Flying Lizard Motorsports Program Manager Darren Law. "Flying Lizard has had so much success there in the past and we are coming at the event this year with a very strong driver line-up. We are happy to have Marco Holzer back, who is an incredibly fast driver. He has a lot of experience at Sebring so he knows the track and he knows the team incredibly well. We were very excited to find out he was available. To also have Robert Thorne from our K-PAX Racing relationship join us again in our IMSA Tudor United SportsCar effort as he did in Daytona, is a great benefit.

He did a great job at the Daytona 24, and he was fast and showed great ability to contend in this type of racing. A new addition to Flying Lizard will be Colin Thompson. He is another very quick up and coming driver. I had the opportunity last season to watch his ability while on his way to winning the Championship in the IMSA Porsche Cup. I have worked with Kelly Moss for a long time and have a great relationship with Jeff Stone, Jeff suggested giving Colin an opportunity to drive with us, so I think it's a perfect fit. We have an extremely strong lineup for this year's 12 Hour."