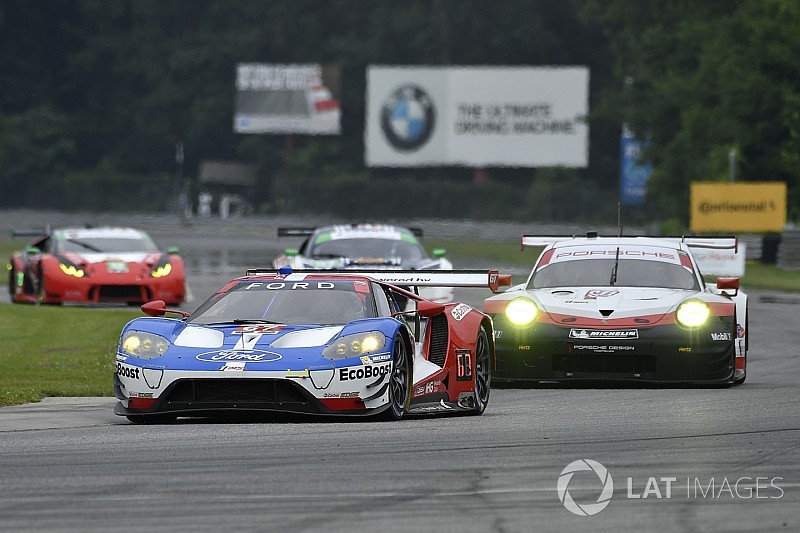 The Chip Ganassi-run Ford GT squad says its chances in Saturday’s GT-only IMSA race at Lime Rock Park were undone as its attempted one-stop fuel strategy required some laps under caution in the 266-mile event.

The race ran green from start to finish for the first time in series history since Virginia International Raceway in 2015 – which was another all-GT affair.

After starting from the front row, the #67 car of Richard Westbrook and Ryan Briscoe could only manage a fifth-place finish after requiring a late splash-and-go pitstop.

Knowing it couldn't beat the dominant Porsches on pace, and despite setting a team-record 87 laps on a fuel stint, Westbrook admitted the lack of cautions bust Ford’s flush.

“It was a fuel game for us,” said Westbrook. “We knew we didn’t have the pace, so we took a swing at it and were just a few laps short.

“All in all, I’m proud for all the guys. I like it when we roll the dice and that’s what we did today.

“Sometimes it pays off and sometimes it doesn’t, but we got some good points and there’s not a scratch on the car, which is pretty remarkable at Lime Rock.”

Briscoe was running P3 when he was forced to pit with five and a half minutes to go.

“We tried to make it on one stop and, can you believe it, we went yellow-free,” added Briscoe. “It’s kind of unbelievable.

“We had a strategy and we stuck to it. I think everyone executed really well today. I’m proud of the team.”

CGR’s managing director Mike Hull added: “Yellows happen when they do, and today they didn’t happen when we needed them to.

“Richard and Ryan set themselves with the mindset they would run good laps and make enough fuel to try to make it on one stop and it didn’t happen for us today, but I think it’s a testament to the team and how hard they work.

Corvette drivers reflect on pleasure and pain at Lime Rock