Some of the main players from Chip Ganassi Racing’s Ford GT program share their best moments from the four-year campaign that will wind down this weekend at Petit Le Mans.

Interestingly, although the Ford GT never conquered the 12 Hours of Sebring, the engine devised for the car did, when Ganassi’s Riley-Ford Ecoboost won overall in 2014, driven by Scott Pruett, Memo Rojas and Marino Franchitti won the race outright.

The development lead-up to the GT’s campaign is a point that CGR’s managing director Mike Hull pointed out.

“This has been a six-year program,” he said. “The first two years, 2014 and 2015, our team ran a Daytona Prototype car to develop the engine, its components, radiators, heat exchangers, turbos, engine management, and electronics so that it was a totally developed engine package.

“[So] when GT testing began in October of 2015, our team was able to concentrate on the chassis itself as the engine and its accessories that were integral to the Ford engine plugged right in as we were all ready to go. That was a big step, immediately.”

“The Ferrari in second place was also from an American entrant, Risi Competizione,” he said. “When the nine drivers were on the podium, they raised three American flags and played The Star-Spangled Banner. The podium is probably 30 feet in the air, in front of what appeared to be 50,000 spectators on the front straight. The European motor racing fans applauded the flags and the drivers. For an American in France, it was very moving.”

Kevin Groot, IMSA/WEC program supervisor for the squad, declared that the 1-2 at Daytona in 2018 was his high point – “That felt so good.  To have the cars and team run like clockwork for a 24-hour race and with so few yellows, and to be able to dominate like that… just doesn’t happen that often.” Yet Larry Holt, chief technical officer at Multimatic, the company that built the Ford GTs, stated that disaster on the cars’ race debut in the same event two years earlier would be his strongest recollection, primarily because it was in such stark contrast to his favorite memory.

“My favorite memory is from May 16, 2015, when the first Ford GT turned a wheel at Calabogie, where we test cars near Ottawa, and ran faultlessly for two days,” said Holt. “[Driver] Scott Maxwell started to make calls on the setup, something that normally doesn’t happen on the first run unless everything is really good.

“My strongest, overwhelming memory, though, is of the Rolex 24 at Daytona in 2016. It is not a good memory but it is a very strong story of how the team [Multimatic, Ford, Ford CGR] overcame adversity. We ran 18,000km of testing between May 2015 and Daytona at the end of January 2016. There were a few small issues that we sorted but nothing that raised any flags on the cars’ robustness and/or durability.

“But, as the world knows, [at the Rolex 24] one car was out of contention in the first hour due to a gearbox shift valve issue that we had never, ever encountered. The other car suffered the same problem and so both were completely out of contention early on. It was an amazing, bad turn of events that I will never forget for how depressed it made me feel, but also how it motivated us all to dig deep and fix that issue and double down on looking at every other system on the car, ending in a trouble-free run for three out of four cars at Le Mans five months later.” 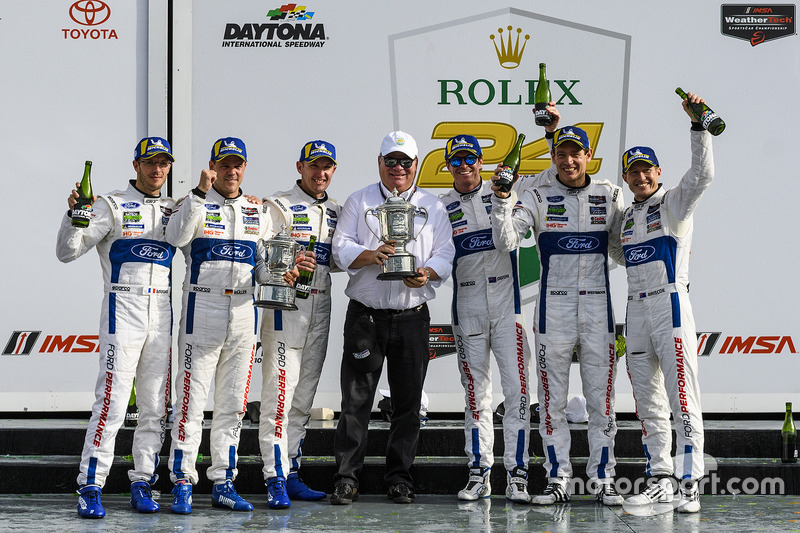 Joey Hand’s fondest memory perhaps inevitably came from that Le Mans triumph, as he was not only sharing the victorious car but also was the one who made the ultimately decisive pass on the Risi Ferrari in the final stint – a moment of historic significance.

“That gave us the lead and we never gave it back,” he said. “The whole story just came together right there, amazingly. The whole 50-year anniversary [since the Ford GT40’s first Le Mans triumph] thing was one thing, but the Ford vs. Ferrari thing played out exactly 50 years later.

“Also, I got to see the replay that’s been in the highlights a lot – the moment they show everyone cheering in the garage. Everyone was thinking, ‘This could be the time.’ It was cool to be part of it.”

Although Ryan Briscoe finished ‘only’ third in another Ford along with co-drivers Richard Westbrook and Scott Dixon, the Australian said that day is one of his two favorite moments of the program.

“Being on the podium at Le Mans the first year, with Joey and Dirk [Muller] and Seb [Bourdais] winning and Richard, Scott and I on the podium with them… was such an incredible moment," said the ex-IndyCar star. "It’s my only Le Mans 24 podium and just to be up there with the sea of people below was really incredible.

“Our Rolex 24 at Daytona win [sharing again with Westbrook and Dixon], and again with both cars on the podium, is the second one. It was a hard battle all race long with the #66 car and was just a massive win. Huge excitement.”

Harry Tincknell, one of Ford’s WEC lynchpins, added: “There were some good wins along the way. Our home win at Silverstone was a great one in 2017, but I think the best moment was probably the second place at Le Mans in 2017…  We ran pretty faultlessly at the front most of the way.

“I was third on the final lap and passed the Corvette for second with two corners to go, which we were told was the latest overtake for position in Le Mans history. That was a pretty cool moment. To get on the podium representing Ford was incredible.”