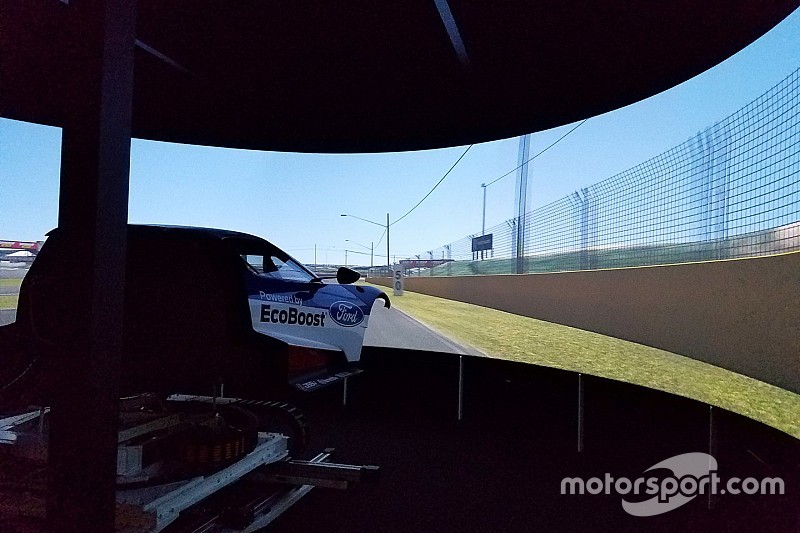 Ford Performance has stepped up preparation for the Ford GT demo run at Bathurst with a dedicated simulator test session for Ryan Briscoe.

Briscoe is set to debut the Le Mans-winning GT on Aussie soil with demo laps at next week's Bathurst 1000, part of the build-up to the brand's formal return to Supercars in 2019.

As part of the preparation for the demo, Briscoe spent some time lapping Mount Panorama in Ford Performance's state-of-the-art GT simulator in North Carolina on Thursday.

Despite the demo not being a competitive hit-out, Briscoe said it was important to get some insight into how the older-spec car that's heading down under will work on the Bathurst circuit.

"It's one of our first ever test cars we're taking down there," he told Motorsport.com.

"It doesn't have the upgrades that our current racecars have. It doesn't even have the rear rollbar attachment. It's got some things on it that we're like 'how's it going to feel?'. So I asked if we could get the set-up more or less close, just to give me a taste of how it's going to feel.

"We're not sure if it's exactly the way it will be, but it was an excuse for me to get in the simulator and drive around Bathurst."

Briscoe added that the Mount Panorama simulation wasn't spot-on in terms of detail, but that it was still a worthwhile exercise given the general accuracy of the simulator in terms of both hardware and software.

"They are an incredible piece of machinery. You can get in there and feel like you're actually in the real thing," he said.

"They only just got the [Bathurst] track, so all the graphics around it aren't completely up to spec. Sometimes your reference points are a little bit off, or what I would usually use as a turning point isn't there.

"But with the tracks we race on you get all the graphics. Video games these days are amazing, and a lot of this stuff comes from that. Then we take the simulation to another level. You can feel the bumps from the car bottoming. It's impressive.

"You're getting the same blindspots, when you turn in there's an a-pillar right where you want to look. That makes it realistic.

The Bathurst 1000 formally kicks off next Thursday.