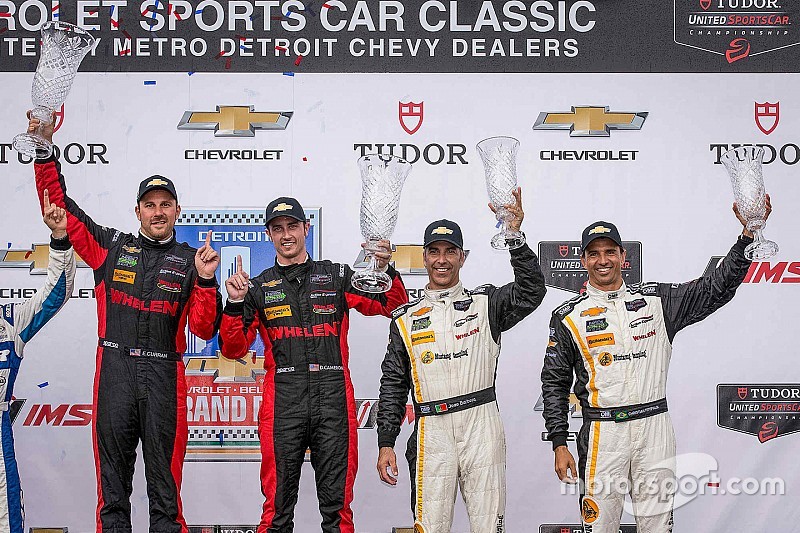 Action Express Racing with both Corvette DPs on Prototype podium

After Curran went from fifth to third in his 38-minute stint, Cameron picked up two more spots, including the winning pass with 28 minutes left on defending race co-winner Jordan Taylor. Cameron withstood a late charge from Action Express Racing teammate Joao Barbosa in the No. 5 Mustang Sampling Corvette DP and won by 18.631 seconds.

Barbosa and pole-sitter Christian Fittipaldi finished third after a late spin to give Action Express Racing its first double podium since the 2014 Rolex 24 At Daytona. The Corvette DP also has won four consecutive races this season in the TUDOR Championship.

“Congratulations to Eric Curran, Dane Cameron, sponsor Sonny Whelen and everyone at Action Express Racing for today’s Corvette DP victory in the Chevrolet Sports Car Classic,” said Jim Campbell, Chevrolet U.S. Vice President, Performance Vehicles and Motorsports. “Both Eric and Dane executed critical overtaking moves in the race and stayed cool under pressure while the Action Express Racing No. 31 Whelen Engineering crew performed flawlessly in pit lane. It’s great to see a Corvette DP win in front of our hometown fans, car owners and employees in the shadow of our worldwide headquarters.”

Saturday’s results unofficially increased Chevrolet’s lead in the TUDOR Championship’s Prototype Engine Manufacturer standings by 15 points. The runner-up finish for Barbosa and Fittipaldi moved them into a tie for the lead in the Driver’s championship with VisitFlorida.com Racing’s Richard Westbrook and Michael Valiante, who finished fifth in the No. 90 Corvette DP.

“It is great to see Eric and Dane break through for their first victory together in the Action Express Racing No. 31 Whelen Engineering Corvette DP,” said Jim Lutz, Chevrolet Program Manager for Corvette Daytona Prototypes. “The changing weather conditions and caution periods made today’s race challenging, the drivers, crew and engineers on the No. 31 Corvette DP stayed calm and perfectly executed their race. It’s always a good feeling to win in Detroit, and it is extremely gratifying to win such a thrilling race and increase our Prototype Engine Manufacturer Championship lead.”

The next round of the TUDOR United SportsCar Championship is Sahlen’s Six Hours of the Glen from Watkins Glen International on Sunday, June 28. The race is set for 10:10 a.m. ET with live television coverage on FOX Sports 1 and FOX Sports 2 starting at 10 a.m. ET. Flag-to-flag radio coverage also will be available via IMSA Radio.

Tell us about your run out there today and what it means to win here in Detroit... “What a day. This is amazing to come away with a victory in the Chevrolet Sports Car Classic in a Chevrolet Corvette DP. Hats off to all the guys at Whelen Engineering and Action Express Racing for making this all happen and helping us get to this position. The car was really good, and for me it was the fastest the car has been this year. I felt real comfortable and fast in it.

I got to the 10 car (Ricky Taylor) and got by him, so I knew we had a strong car. It was just a matter of keeping it off the wall, doing a good job and handing it off to Dane (Cameron) to let him take over. And man did he do a good job. He charged forward and got around the 5 car which is not an easy job. It was such impressive stuff and just a phenomenal job. It’s just amazing to me that we are five races into the season and here we are with a win.

So again, just hats off to Sonny Whelen and Whelen Engineering, Action Express Racing, Chevrolet and everybody who helps us move forward and make it happen. It’s just a major win for Dane and amazing to have it all come together so quickly. We are all meshing so well and if we are going to have our first win be in Detroit, it’s great to do it in front of all the Chevrolet guys and in their backyard and hometown of Chevrolet. It’s just so much fun to be a part of this program. I’m super happy to be involved.”

Tell us about your effort to go from third to second and on to the lead... “ Yeah, Eric did a super job on his stint and got the car to third which was great. I made a mistake when leaving the box to gave up a spot and was pretty disappointed because the guys did an awesome job when they were done. The guys were done before the No. 5 car so we should have been able to leapfrog them and come out first or second but we came out fourth. I was pretty disappointed in myself and I just kept digging because we had a good car and we were really, really strong in turns One and Two and the exit of Two over the bumps.

So as long as I could get close I had a really good shot to make passes going into Turn Three. When you race up front, everyone is really respectful so it was good racing all the way through. We had a great, great car and it feels good because have been waiting to put it all together. It’s very satisfying to get our first Prototype win.

To do it here, do it in Detroit and do it with a first time overall podium and first time win is a major improvement and quite a special day. And thanks again to Action Express Racing for fantastic cars and pit stops, and thanks to Whelen Engineering for all their support for this program and for everybody who gave us the opportunity to drive such great cars.”

Jordan Taylor, Wayne Taylor Racing No. 10 Konica Minolta Corvette Dp – Finished Sixth: “It was a tough race. We were struggling a bit for pace but we got a good restart when I got in the car. We led for a little bit, but I knew the other guys were strong and were coming aggressively. The 31 (Dane Cameron) went by, and then I was catching him in traffic and got caught out by a GT car that, I don’t know if he didn’t see me, but I tried to back out and he just kept turning. I guess it was a mutual disagreement. A tough day for points, considering how much ground we were looking like we were going to make up. We only dropped one point to the leaders, but it could’ve been a lot better.”

Ricky Taylor, Wayne Taylor Racing No. 10 Konica Minolta Corvette Dp – Finished Sixth: “We didn’t have the fastest car today, but our guys never gave up. We were fighting hard and did our jobs, working as hard as we could. The guys made a great pit stop. We passed a car in the pits. That was basically the race – that, and when Jordan made a great restart that gave us the lead temporarily. As I said, we didn’t have quite the fastest car today. We were looking good for a podium finish but, unfortunately, the drive-through penalty kind of sealed the deal. It wasn’t a terrible day for the championship, so we’ll just move on to the next one and see if we can make up this deficit over the last half of the season.”