Graf picked up ninth tenths on his previous best lap to register a time of one minute 52.667 seconds, which was good enough to place him fifth.

Muscle Milk Pickett Racing was part of a close battle in Prototype class qualifying on Friday at Sebring International Raceway and thanks to a great effort by Klaus Graf, the team will be starting from fifth for Saturday's 12 Hours of Sebring.

After some productive practice sessions, Pickett Racing was confident heading into the second qualifying session of the 2014 TUDOR United SportsCar Championship season.

Graf improved his time with each lap and was sitting in ninth place when he started his seventh and final lap of the 15-minute session aboard the team's #6 Muscle Milk ORECA Nissan. 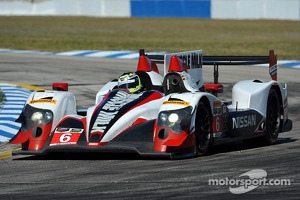 Knowing that he had to push hard in order to move up the grid, the German picked up ninth tenths on his previous best lap to register a time of one minute 52.667 seconds, which was good enough to place him fifth.

With the top five cars within seven tenths of a second when the checkered flag fell, it promises to be an exciting battle on the bumpy Sebring track on Saturday. A battle that Muscle Milk Pickett Racing and its drivers Graf, Lucas Luhr and Jann Mardenborough are ready to face.

The action gets underway Saturday, March 15 with a warm up session at 8 a.m. and the 62nd Annual Mobil 1 Twelve Hours of Sebring Fueled by Fresh From Florida going green at 10:15 am ET.

Klaus Graf, qualifying driver Muscle Milk Pickett Racing
"We made a lot of progress since Daytona. We had more time to look into and learn about the car as well as test more at both the official Series test and at a private test.

"I think the qualifying result shows that. It's very, very competitive and very close, so P5 is a good starting spot. It wasn't perfect and I pushed really, really hard but it was the max we could get today. The track changes so much here. I don't think we're the only ones to say that it wasn't a perfect qualifying, but you have to adjust to it and get the maximum out of it.

"I think people need to go away from saying that one track suits more the DP cars and another the P2 cars. The Series balanced the cars now and made it so that's not so much the case anymore. It's highly competitive, there are some good teams and very, very good drivers and we have to look at every racetrack for ourselves and get the maximum out of it.

"The race is going to be crazy, traffic is always a major issue. The number one thing in the beginning is that you have to run clean to stay in the hunt, you have to not make any mistakes.

"Good pit stops are also important. The boys did awesome in pit stop practice and we also did a lot of driver change practice. We worked a lot with Jann as well and put a lot of thought into our strategy. We have to push hard and be smart and see where we are as the race goes on."

Jann Mardenborough, first time racing at Sebring
"I feel real comfortable with the team and I think we've made some steps forward with the car since the test a few weeks ago. "The team has done their best to make me feel completely settled in both the team environment and in the car, whether that be learning the track and getting some laps in night practice.

"I feel really prepared for the race. We've been focusing a lot on driver changes and that sort of procedure. I think we've got it nailed down and we're going into the race pretty well prepared.

"We qualified fifth, I think that's a good place to be. As for our race pace, I think we're stronger than certain cars out there. As long as we stay out of trouble and if the pit stops go well, I think we'll be in a good place after 12 hours."

Williams: Vowles can help "finish off the journey" in F1 turnaround