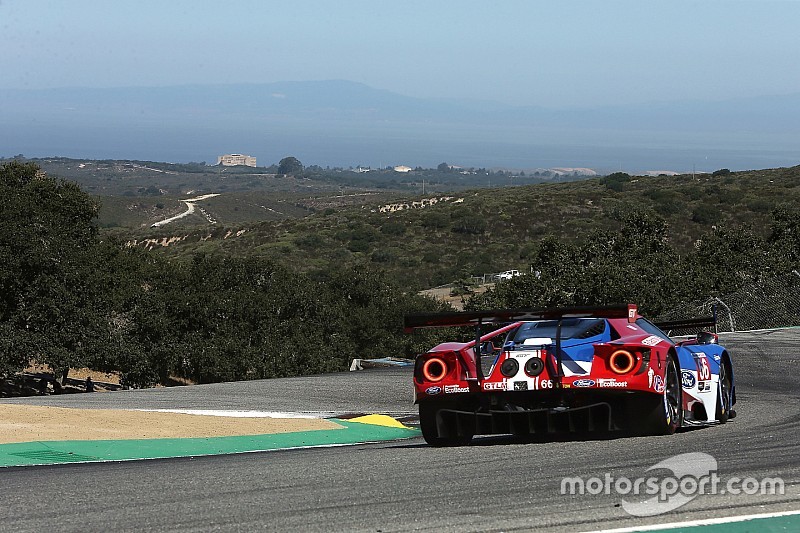 Joey Hand and Dirk Muller, who scored their first IMSA win in more than a year at WeatherTech Raceway Laguna Seca, has hailed the progress made over the course of the weekend that transformed the #66 Ford GT into a dominant winner.

Muller tracked the pole-winning BMW M8 GTE of Jesse Krohn in the early stages of the penultimate round of the 2019 IMSA WeatherTech SportsCar Championship season, and when the German car failed to accelerate out of Turn 2 on Lap 20, Muller swerved around it and snatched the lead.

He relinquished the driver seat of the Ford to Hand who led the rest of the way, winning by 20sec. After leading 72 of the 114 laps for the GT Le Mans cars, Hand scored his 19th IMSA win and Muller his 24th, but it was their first triumph since Lime Rock last year.

“I’m not going to lie, that feels really great,” Muller said. “It’s a sweet victory but it wasn’t an easy one. I knew my car was great, I could follow so closely behind [Krohn].

"I don’t really know what happened but he lost momentum and I took advantage and got by. That was tough because you don’t expect it. That was quite a close moment.

“From that moment, I think that was the milestone for the victory.”

For Sacramento native Hand, it was a long awaited first win at a track where he’s raced for more than two decades. After missing two races this year due to illness, it was also a form of redemption for him.

“I’ve been trying to win at this racetrack, my home racetrack, since like 1998,” Hand said. “That puts in perspective how this feels to me.

“I’ve got a lot of seconds here, I’ve been on the pole here in all different categories. I told my wife two weeks ago that 2019’s been kind of a tough year for me and I said, ‘I’m going to turn this one around, we’re going to win this one.’ That’s what we did today.

“This one feels really good. It’s not Daytona, it’s not Le Mans or whatever, but I’ll tell you what – this track stands out on the calendar for everybody. It especially stands out for a California guy like me.”

Krohn and John Edwards finished second in the #24 BMW, while the Corvette C7.Rs of Antonio Garcia/Jan Magnussen and Tommy Milner/Oliver Gavin grabbed third and fourth after making a three-stop strategy work by demoting the other BMW of Connor de Phillippi and Tom Blomqvist in the closing laps.

The Porsche 911 RSRs finished only seventh and eighth, Earl Bamber and Laurens Vanthoor nonetheless extending their championship lead over teammates Nick Tandy and Patrick Pilet to 12 points, but with Magnussen/Garcia reeling in the latter pair so that they now sit just three points in arrears.