Hawksworth, Telitz on why the Lexus RC F is an IMSA winner 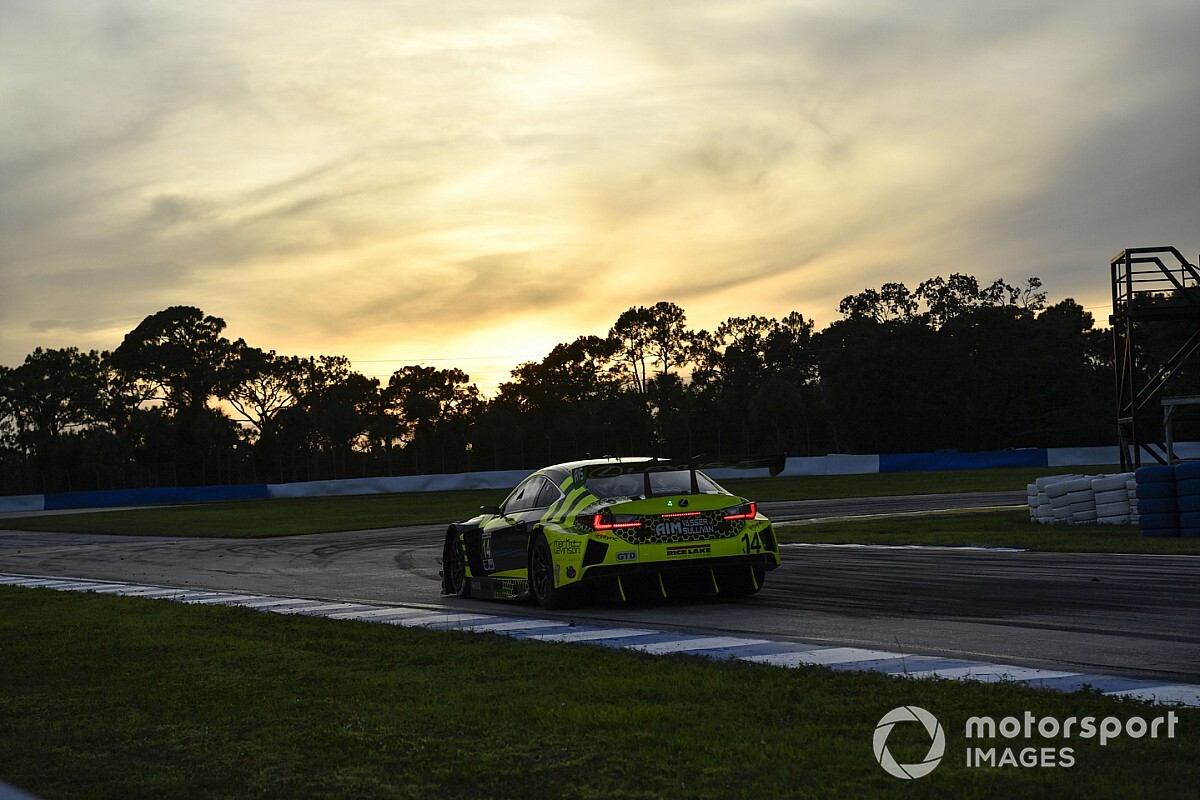 One obvious reason is that both drivers possess talent that they proved time after time in U.S. open-wheel junior formulas, but also blend it with a determination borne of frustration that their open-wheel careers were stymied too early.

Twenty-nine-year-old Hawksworth, from Bradford, Yorkshire, UK, won the 2012 edition of what was then called the Star Mazda (now Indy Pro 2000) championship, took three Indy Lights wins the following year and then graduated to IndyCar with Bryan Herta Autоsport – at that time a completely separate entity from Andretti Autоsport. He scored a podium, but then moved to A.J. Foyt Racing for two years. The IndyCar legend’s team was struggling particularly at this stage of its career after expanding from one full-time car to two. And not helping Hawksorth’s cause was that he looked ill at ease on ovals – never the strongest part of his game anyway – this, perhaps the lingering aftermath of a nasty shunt at Pocono in his rookie season. Without attractive open-wheel options at the end of 2015, Jack sought opportunities elsewhere and headed to sportscars, something with which he had become familiar, driving with some success for Paul Gentilozzi’s RSR Racing team in the Prototype Challenge category.

Telitz, by contrast, has yet to make it to IndyCar. Like his team partner, the 28-year-old from Rice Lake, Wisconsin, also won the Pro Mazda championship – beating now highly lauded Team Pelfrey teammate Patricio O’Ward. Joining Belardi Auto Racing for an Indy Lights campaign in 2017, Telitz bookended his season with victories but felt compelled to stay another year to go for the championship, yet this time around he scored five podiums but no wins. With still no firm full-time offers on the table for 2019 because he had no budget to speak of, he was available to return to Belardi mid-season, and won at Toronto. But then he had never lacked pace, nor had he been a crasher: his problem throughout his time in Lights was that he seemed to suffer a disproportionate amount of genuine misfortune, often in the wrong place at the wrong time when one of his rivals screwed up.

Still, a lot of people only look at the results sheets, and so no viable IndyCar rides were being offered at the end of the 2019 season… but by then another door had opened thanks to his performances as ‘third man’ in one of AIM Vasser-Sullivan’s Lexus RC Fs. 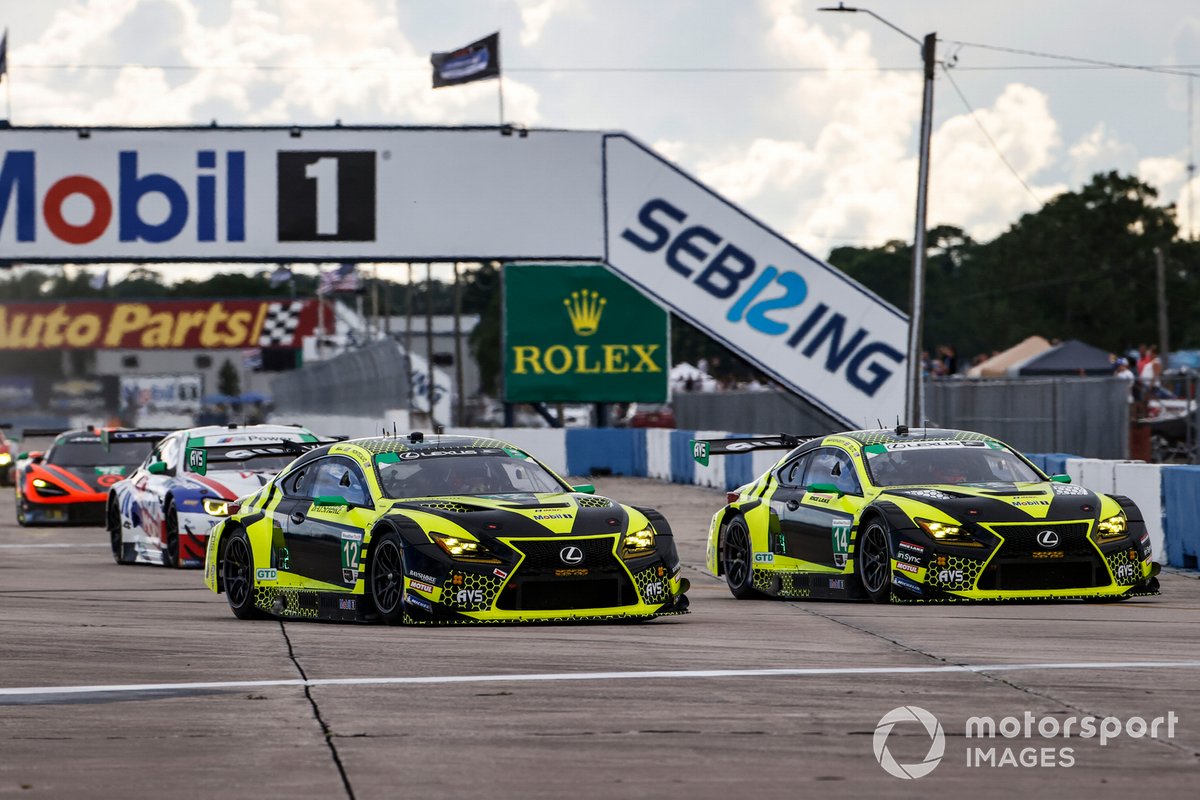 Campaigned initially by Gentilozzi’s renamed 3GT Racing squad, the two RC Fs scored a couple of top-five finishes and a pole position in 2017, but didn’t truly blossom until Year 2. Dominik Baumann and Kyle Marcelli brought home Lexus’s first two wins: Hawksworth, who’d been top of Gentilozzi’s list of potential drivers because of his PC-class performances, had leapt at the chance to drive for a ‘works’ team, but in 2018 he and then co-driver David Heinemeier Hansson were the more unfortunate duo and had to be content with three pole positions and three top-five finishes.

For 2019, Lexus dropped 3GT Racing and instead hired a new entity – Andrew Bordin’s AIM Autоsport had merged with the Jimmy Vasser/ James ‘Sulli’ Sullivan team that co-owned one of Dale Coyne Racing’s entries. Almost immediately the move paid off, with the RC Fs finishing second and fifth in their first race under the AIM Vasser-Sullivan banner. Telitz joined Townsend Bell, Frankie Montecalvo and Jeff Segal on the podium, while Hawksworth and new full-time partner Richard Heistand rolled home with a top-five, with the aid of Austin Cindric and Nick Cassidy. Before mid-season, Hawksworth and Heistand would land wins at Mid-Ohio and Belle Isle, Detroit.

AVS was out of luck in this year’s Rolex 24 Hours at Daytona but since the season restarted this month, with Telitz joining Hawksworth full-time, this pair has been unstoppable. In the 2hr40min ‘sprint’ race at Daytona, they led home Bell/Montecalvo in a Lexus 1-2, while at Sebring two weeks ago, Hawksworth and Telitz again prevailed.

The car’s traits and improvements 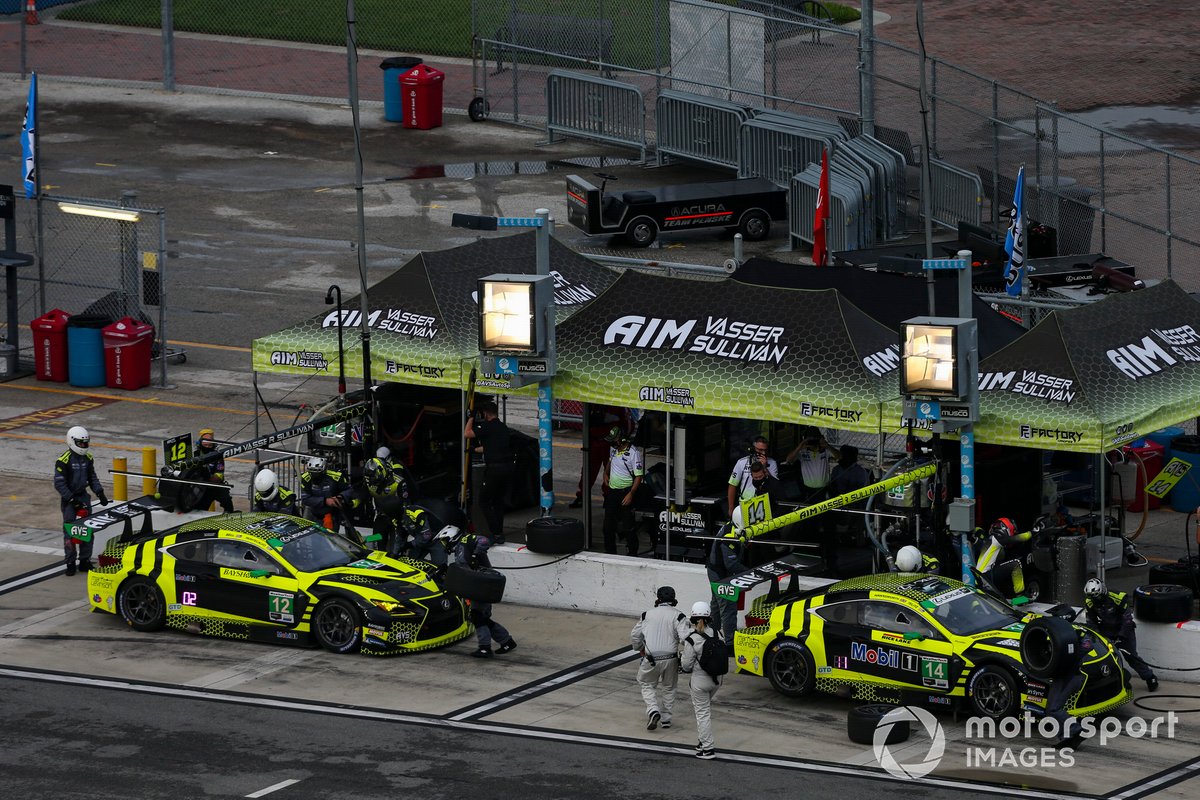 Like the drivers, the Lexus RC Fs have had to overcome adversity in the sense that they are something of an anomaly in IMSA’s GT Daytona class. Along with the BMW M6 run by Turner Motorsports, AVS’s luminous racecars are based on four-seater coupes, but are going into battle with supercars such as the Lamborghini Huracan and Audi R8. An RC F is at least five inches taller than all its class rivals bar the BMW, and is actually 10 inches taller than the Lambo! The inevitable higher center of gravity therefore gives the AIM Vasser Sullivan engineers a fundamental and unchangeable trait around which to work.

And yet here it is in its fourth season of the WeatherTech SportsCar Championship and it’s apparently the car to beat. Hawksworth, ahead of the fourth round of the season, credits the team.

“The foundation of the car is the same as when it was homologated back in 2017,” he says in response to Motorsport.com’s question. “We had an ABS change from 2017 to 2018, but that’s the only fundamental change we’ve had regarding the homologation. We’ve just refined the car, refined the cooling inside the cockpit, refined the issue we had with braking.

“It was a known joke around the paddock that we’d burn through rear tires, but we’ve come up with solutions and setup changes that allowed us to make the tires last longer.

“But what we’ve done really well over the last few years is strengthening our weaknesses so there are not so many holes in our game. I feel the Lexus RC F is quite a complete GT3 car and pretty versatile, to be honest.” 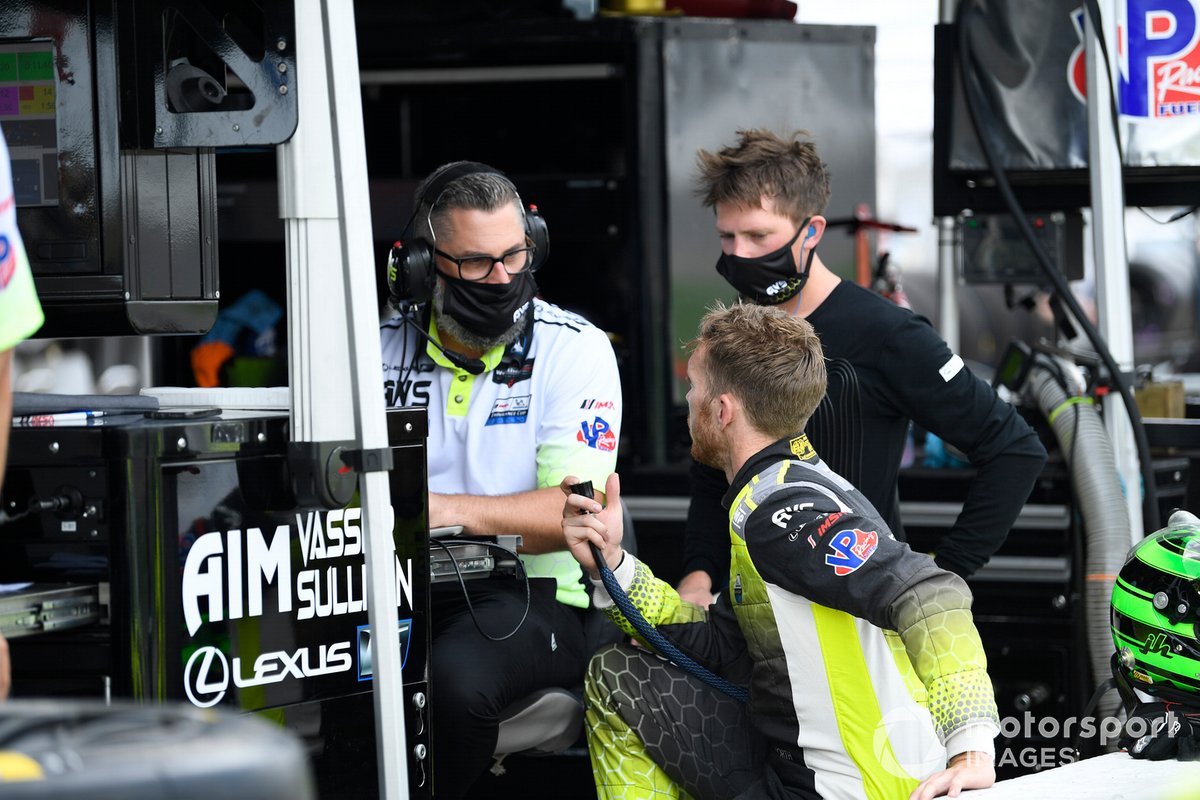 Bordin, Vasser and Sullivan have been high on Telitz from the moment he stepped into their car at Daytona 18 months ago, and he swiftly was assigned the third man role for the remainder of the season, at Sebring, Watkins Glen and Petit Le Mans. This enthusiasm has only grown since, so when things didn’t work out with Chase as Hawksworth’s full-time partner in 2020, there was only one obvious choice to call as replacement. And as the results have proven, AVS’s faith has not been misplaced. But did Telitz himself realize he was going to make such a fast pedaler of what is effectively GT3 machinery?

“I got to drive quite a few cars in my career, mostly open-wheel cars, and I even got to drive a midget last summer,” he replies. “I just take any opportunity I get to drive a car, and the more you do that, the better you’re going to be at adapting to new cars and new situations you have.

“Also this year it’s been a huge help having Jack as a teammate who comes from a similar background as me. Any time I’ve got a question about the car or a situation in the race or qualifying or whatever it is, Jack knows exactly how to answer it for me to make sure I understand it.”

Apparently, too, were one to draw up a Venn diagram of their tastes in racecar behavior, Hawksworth’s and Telitz’s circles would almost completely overlap, like a total solar eclipse.

“We generally want almost the exact same thing out of the car most of the time,” says Telitz. “The only small difference is that I do qualifying so maybe I might want something different during a qualifying run than we’ll want for the race – that would be the same for every team.

“But in terms of feel for the car, Jack and I are used to the open-wheel feel – how the brakes feel, how we want the car to rotate. We have similar styles there and so it’s easy when we do our debriefs; our debrief sheets look similar, and I think that helps the engineers go down one path with us.” 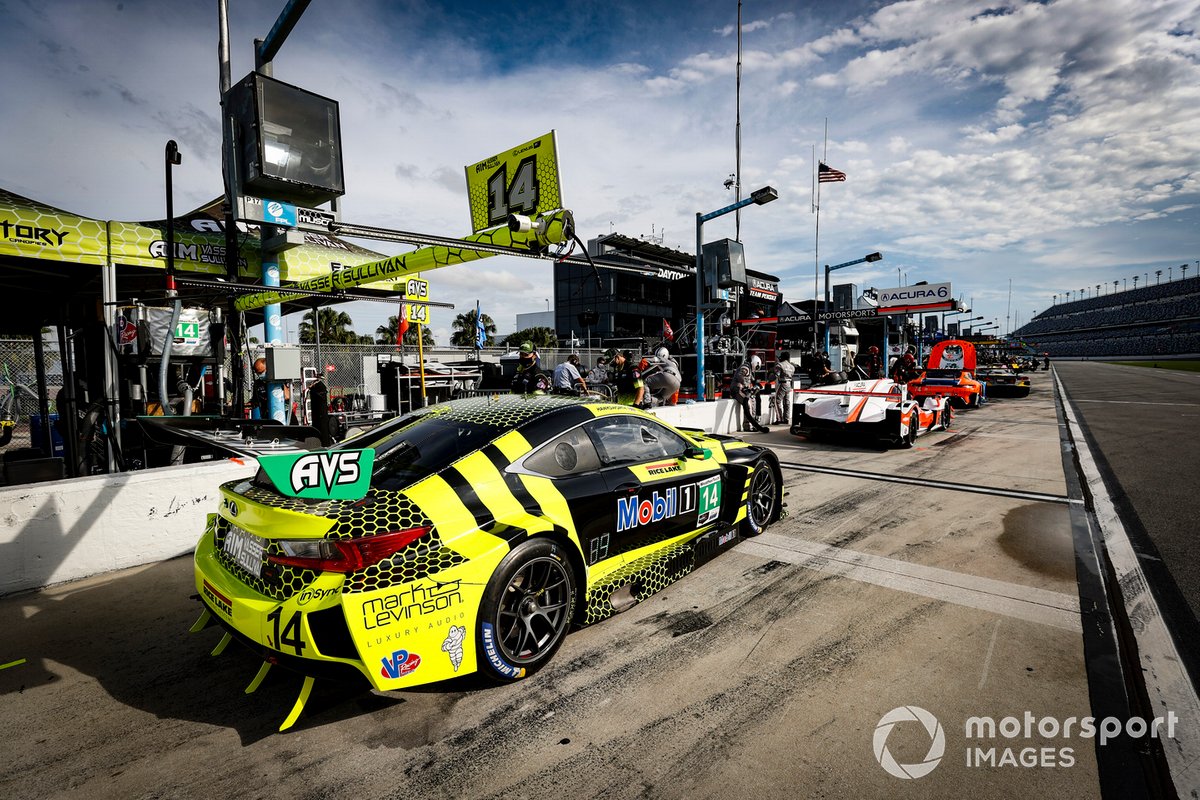 Given the Lexus RC F’s attributes, Hawksworth describes himself as ‘quietly confident’ that his car will be quick at Road America this weekend.

“Where we’ve struggled is tire degradation and pace throughout the whole stint, so it will be interesting this year, because I think it’s the first time we’ve been to Road America in a much better situation in regards to tire deg. We’ll arrive and unload slightly differently to how we have the last few years and see if we can make the pace last a little bit longer [into a stint] this year. If we can, we should be in quite good shape.”

Of course the specter of Balance of Performance hangs over the team following two straight wins, and there could be a substantial shift in the dynamics of the GTD. IMSA has cut 9hp from the Lexus and almost 7hp from the Scuderia Corsa Ferrari 488 (which ran Telitz/Hawksworth close at Sebring last time out), while the Lamborghini Huracans and Audi R8s have received a 13hp boost.

An effective 21hp loss compared with the opposition could leave some folks frustrated, but Hawksworth is a realist.

“The most important thing is to finish where the car deserves to finish, or higher if you can,” he says. “With regards to the BoP and the tracks we go to, we can’t control that, so we just have to let be what will be – if it’s good, it is; if it’s not, it’s not.

“You just try to maximize it every single weekend.”

So far this summer, that’s exactly what this pair has been doing. 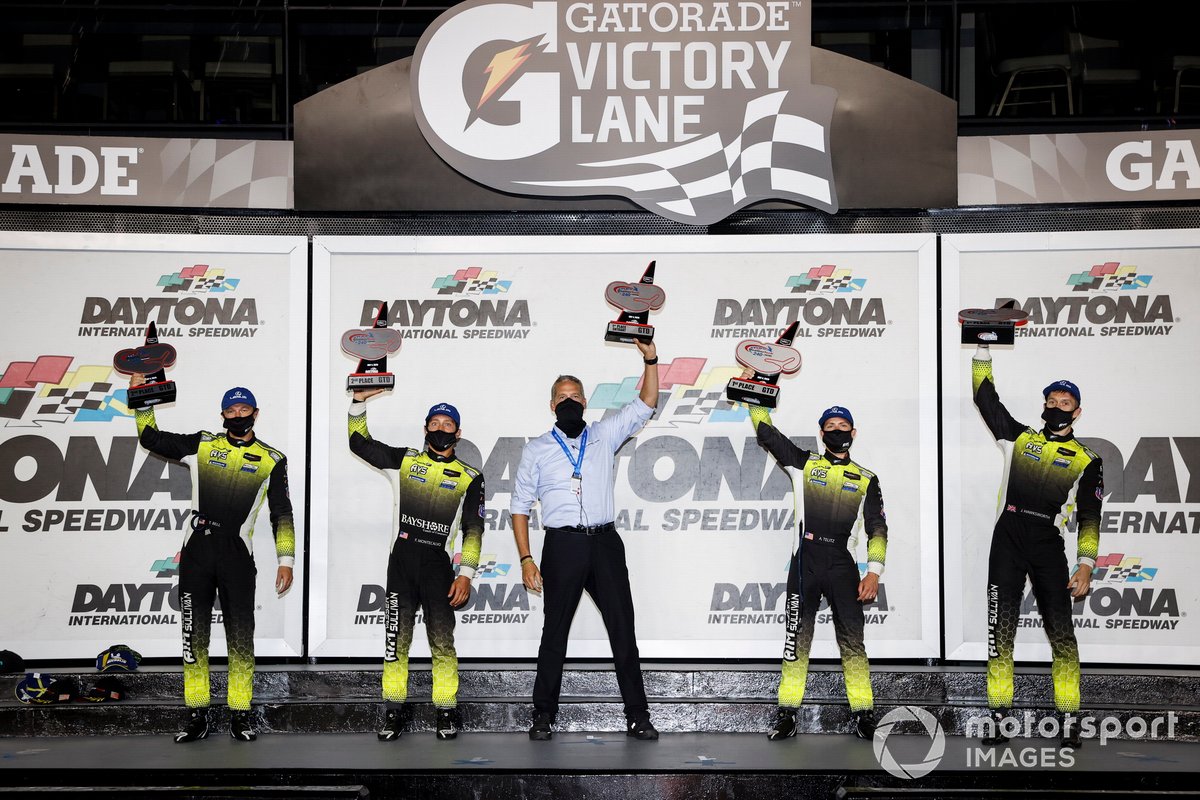