Subscribe
Previous / “We made our own luck,” says Turner after win at The Glen Next / Chip Ganassi: I’m out of NASCAR but “still heavily involved in motorsports”
IMSA / Watkins Glen News

Multimatic’s Larry Holt says Harry Tincknell’s drive at Watkins Glen last Sunday, that resulted in victory for Mazda in the Six Hours, as his best yet.

In the final round of pitstops, taken during the race’s final caution period, Multimatic Motorsports’ Leena Gade, race engineer for the Mazda RT24-P, elected to take fuel and a right-front tire, while the team’s fastest rivals took on left-side tires.

The time saved was enough to jump the Mazda, shared by Tincknell, Oliver Jarvis and endurance racer Jonathan Bomarito, to the front of the field. But it meant that over the 37 minutes of green-flag running that remained, Tincknell needed to go fast enough to hold off Olivier Pla in the #60 Meyer Shank Racing Acura ARX-05, while also saving fuel, and also ensuring that he went slow enough that the DPi cars would complete only 200 laps in the six hours. Had he not received the one-lap-to-go white flag at the end of Lap 199, Tincknell would likely not have even finished in the top four, since the Mazda ran out of fuel mid-way through its slowdown lap.

Holt, executive VP at Multimatic Special Vehicle Operations, said: “Harry Tincknell was absolutely spectacular, best drive he’s ever given us in my opinion.

“He balanced his fuel consumption against pace to keep Olivier behind by two seconds for half an hour while also heeding our warnings of not breaking out enough to cause an extra lap at the end.

“It was an impeccable display of controlled driving. He was sailing past us into Turn 1 with absolutely no throttle [but] only losing less than a second on his lap times.

“The white flag flew less than three seconds before we got to the line. Four seconds earlier and we would have had to do two more laps, which we wouldn’t have made.

“The number crunching going on back in Toronto [Multimatic’s home base] and on top of the box was incredible, with triple redundancy on everything we did. The data coming off the car was perfect and we made it home with Pla right on our gearbox. Meyer Shank’s guys had banked some fuel, but so had we and it was a flat-out last lap to the flag.

“We got out in front of the #60 and #01 [Chip Ganassi Racing Cadillac] with some great pit strategy and execution. In fact the boys over the wall were perfect all day; we made all but a couple of our passes during the pitstops. This was a race where every single member of this team made a significant contribution, along with the three best pedalers in the series.  It was a pretty emotional moment when we crossed the line, having had Mid-Ohio stolen from us in the same circumstances when we had a dominant car.”

The win was dedicated to John Valerio, an engineer at Multimatic who perished in a road accident last month.

This result means that fulltimers Tincknell and Jarvis are 31 points behind Wayne Taylor Racing’s Ricky Taylor and Filipe Albuquerque heading into this Friday’s race, also at the Glen. The WeatherTech 240 replaces the originally schedule event at Canadian Tire Motorsports Park, which has been canceled for a second year due to COVID restrictions.

Tincknell, who along with Bomarito and (ironically) Pla, scored Mazda’s first IMSA Prototype win in this same event two years ago, said: “The whole weekend was a fantastic team effort from Mazda and Multimatic. I think all three of us did the job in the car but, my gosh, the mechanics and the guys and girls on the stand were just incredible.

“To get me out in the lead with 40 minutes to go was the key moment. I knew it was going to be very tight and I wasn’t going to be able to go flat out all the way as we had to save fuel. I could see Oli [Pla] coming at the end but I had the call on the last lap to go flat out so I knew at that point that we would be OK.

“I ran out of fuel at Turn 7 on the slowing down lap, which just shows we had the perfect strategy and the perfect engineering from Multimatic to get us to the line.”

Jarvis added: “We’re in the championship hunt and we’ve said all along that we need to take consistent podiums but we also want the wins. To do it in this fashion where we didn’t have the quickest car – we made some big changes as we went through the sessions and found the direction for the race – really shows the strength of this team. We had to work harder this weekend than we ever have before to get a chance of the win.

“To get it the team had to execute perfectly and the drivers couldn’t afford any mistakes. This is a very special win.”

“I love sharing a car with these guys,” said Bomarito. “They’re competitors, they’re warriors and they are flat out the whole time and that’s what it takes in this class in this series.

“It was a flat out race with some brilliant fuel-saving finesse at the end. I was listening on the radio up in the stand to all the math and calculations. I wish everyone could hear and experience it, because it’s neat to hear the engineers crunching the numbers and trying to calculate the end of the race.

“If Harry had been four seconds further up the road we would have had to do one more lap and probably would have run out of gas so that’s how close they are calculating the fuel and that’s pretty cool to see.” 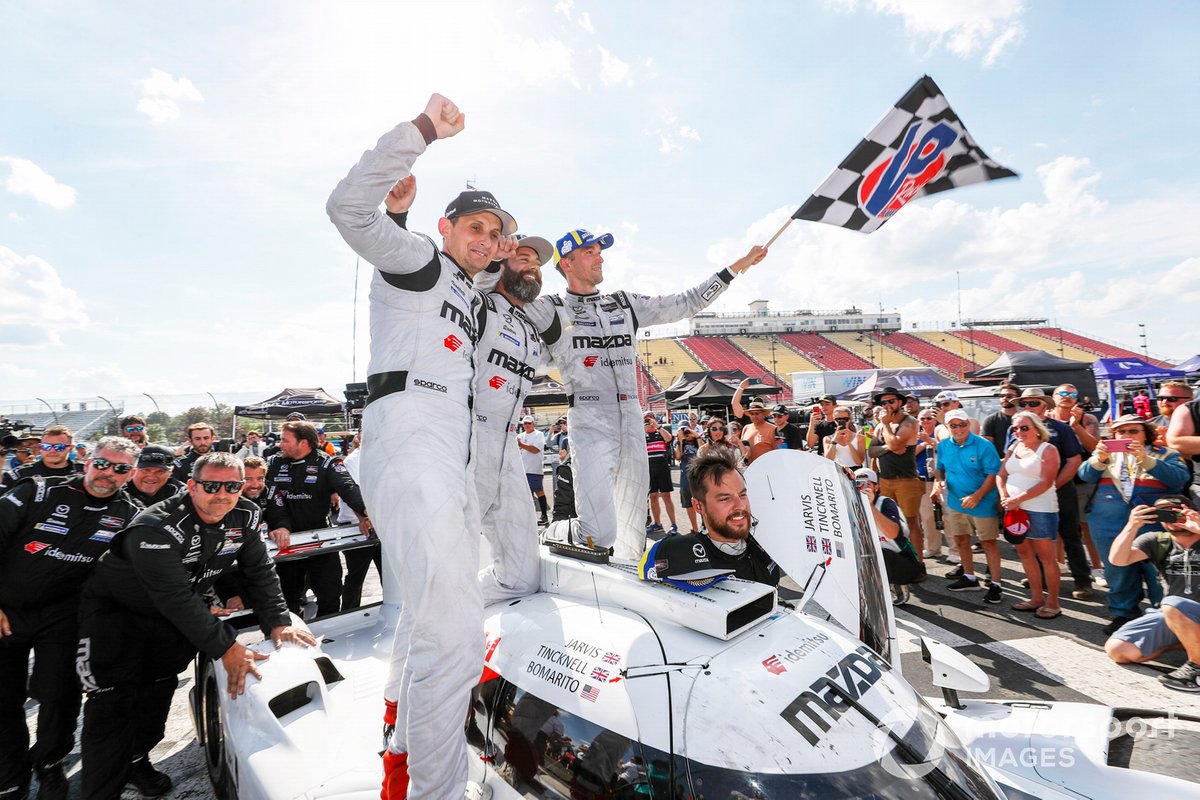 Proton in line for dual Porsche LMDh campaigns in WEC/IMSA

Tincknell, Priaulx Jr in at Proton Tincknell returns to WEC in Proton Porsche alongside Priaulx Jr