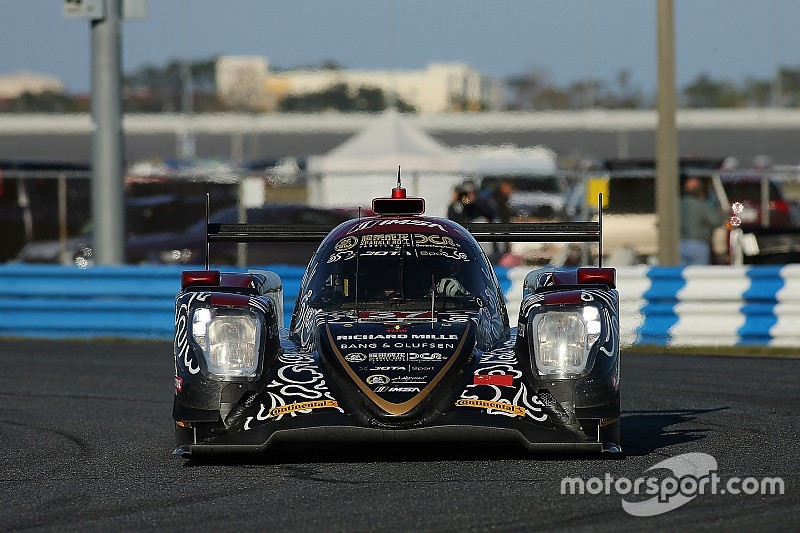 The Jota-run Jackie Chan DC Racing team is evaluating an assault on next year's Rolex 24 at Daytona in the DPi class.

Jota Sport is looking into temporarily swapping the LMP2 Oreca-Gibsons it fielded in this year's IMSA WeatherTech SportsCar Championship opener for DPis as a result of the series organisers' decision to create separate classes for the two kinds of prototype.

The class winner and outright podium finisher at the 2017 Le Mans 24 Hours wants to be in a position to challenge for outright victory again should it return to the US enduro, but P2 will from next year become a pro-am class secondary to the DPi division.

Team boss Sam Hignett told Motorsport.com: "Daytona is not something we will be doing with a P2 car again. The rule change was the final nail in the coffin for any plans that we had to go back with the Orecas.

"But that doesn't mean we aren't looking at doing it in the DPi class."

Hignett explained that renting cars for the IMSA opener was one way forward for the team in a period when it will be in the middle of its 2019/19 FIA World Endurance Championship superseason campaign.

"We have been told by a couple of manufacturers that there are cars available for lease if we can put a programme together," he explained.

The stalwart British sportscar squad ran a pair of Orecas at Daytona this year under the Jackie Chan DCR Jota banner.

Williams Formula 1 driver Lance Stroll was among the team's all-star roster, along with Robin Frijns and Daniel Juncadella from the DTM and Felix Rosenqvist and Antonio Felix da Costa from Formula E.

Jota's revelation follows news from United Autosports, a regular at Le Mans and in the European Le Mans Series, that it will not be returning to Daytona in 2019.

The team that fielded Fernando Alonso in this year's race cited the separation of the two kinds of prototype and its inability to go for the win with its Ligier-Gibsons as the reasons.