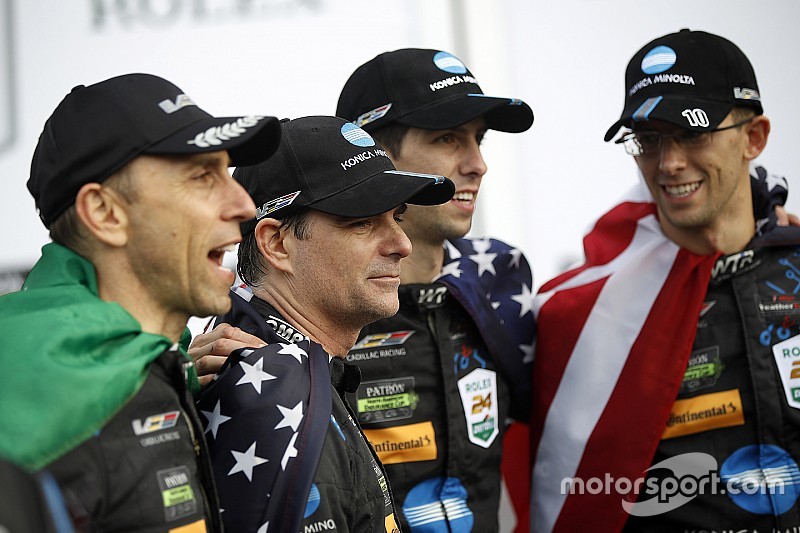 Rolex 24 Hours winner Jeff Gordon says he won’t rejoin the Wayne Taylor Racing team for the Sebring 12 Hours in March, but has left the door open to a future return with the Cadillac-equipped team.

With Angelelli calling time on his racing career, a space opens up in the car for the races that require three drivers, including Sebring and Petit Le Mans.

Gordon has commentary obligations in NASCAR with FOX that rules him out of the equation at Sebring, but the opportunity to drive with the team again could arise later in the season. FOX’s coverage ends a week before the Six Hours of Watkins Glen, where teams can run a three-driver line up.

“I’m kinda like Max, to retire on top is kinda a good thing!” quipped Gordon on Sunday. “In all seriousness, I love driving this car. I love working with this group. They are an amazing team and they put a lot of hard work, sweat, blood, tears into their preparation to get here.

“I felt pretty early on that there was something special about it. It’s great to see how it’s panned out, especially that great move that Ricky made at the end.

“For me, every time I get laps in the car, I get more comfortable. So I wanna get more laps.

“When I said 'retire', it’s not from racing, it’s just that the Cup car took so much of my time.  Who knows now? I’m a competitor, I wanna be at full pace and contribute – and make sure this team wins.

“I will not be at Sebring, I can tell you that.”

When asked if he would consider racing at the 24 Hours of Le Mans in future, Gordon replied: “This is where I got myself in trouble by saying ‘let’s see how this goes’. I have a busy schedule, a lot going on with my FOX commitments, and those with Hendrick.

“I’m going to stay in close contact with Wayne, and Ricky, Jordan and Max. See what potential opportunities there may be out there. I’ve got a great relationship with Cadillac and GM, but I have no plans at this time.”

“What happens after this?”

Team boss Wayne Taylor paid tribute to the role Gordon played in his landmark success at the weekend, and hinted that he hoped there would be future collaborations.

“Seeing the way that Jeff has worked with Max and my kids has been more special to me than anything in my racing career,” said Taylor Sr. “To have a guy as humble and nice on board with us, the sad part for me is what happens after this?

“Is he going to go away and never talk to me again? It’s like losing a girlfriend, what am I going to do now?’”