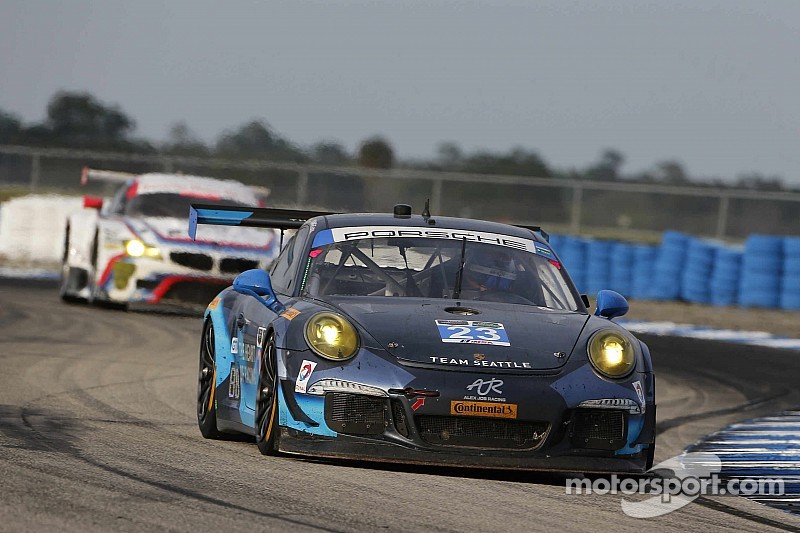 Things finally go the way of Alex Job Racing, one year after the infamous officiating debacle at Sebring.

Following the 63rd annual running of the Sebring 12 Hours, there were plenty of story lines to discuss. Chevrolet secures their first overall win here in 50 years, doing so by sweeping the podium ... The same Viper chassis that burned last year won the pole and almost the race itself in GTD.

But there's one less talked about story that I decided to highlight today. We all remember the shaky start officials of IMSA's newly formed TUDOR series endured last year and of course, one of their most infamous blunders came during this very race.

While running second in the GTD class, the No. 22 Alex Job Racing Porsche was enjoying a strong run at Sebring as a factory Porsche got into a Ferrari, spinning the car. This had absolutely nothing to do with the GTD Porsche, that is until officials issued them an erroneous penalty, somehow confusing them with the No. 912.

They refused to pit, knowing they were innocent and argued until they were given an ultimatum. Pit or we stop scoring you. And so they pitted. Officials realized their blunder when a furious Alex Job make his way to race control to look over the video, but the damage was already done and the No. 912 got off penalty-free.

The aforementioned No. 912 went on to win GTLM for Porsche while Alex Job's car was forced out of contention for the GTD win, running on the same lap as the class victor.

Karma, in its own brutal and somewhat just way, made things right this year. With 11 of 12 hours in the books, both the No. 911 and No. 912 ran a near perfect race, running 1-2 in GTLM with a comfortable advantage over third. Within minutes though, both cars vanished from the podium and tumbled down the order.

During its final pit stop, the team could not get the No. 912's left rear wheel off, costing the car multiple laps. Minutes later, the No. 911 was robbed of any chance to avenge its sister car when it abruptly slowed with gearbox issues.

A dramatic end to GTD

At the same time, Mario Farnbacher was trying to hold on to the GTD victory for the No. 23 Alex Job Racing Porsche, the sting of 2014 still simmering throughout the entire team. With eight minutes to go however, the unthinkable happened as the car careened off the track and into the darkness, narrowly avoiding a barrier, but losing the lead in the process.

Viper was posed to steal the show until the car suddenly limped down pit road, silent with temperature issues. Alex Job Racing was gifted a second chance with just five minutes left, and they did not let this one slip through their fingers, winning their class and putting an exclamation point on the cruel end to their 2014 Sebring effort.

Call it karma, pure luck, or a coincidence, but to see the factory team's dramatic demise alongside Alex Job Racing's thrilling triumph put my mind straight back to the debacle of last year.