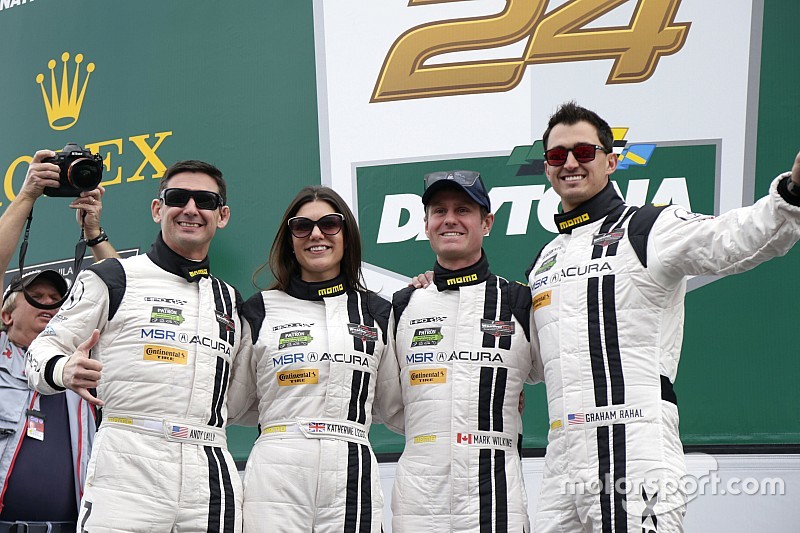 Briton Katherine Legge has earned her stripes as a race car driver in a variety of cars in the United States.

She originally came to the US to try out for an Indy Lights team, driving on an oval for the first time at Texas Motor Speedway and besting six others that had invitations to test; she did not and just brought her helmet in the hopes of having a chance.

She then went to the Atlantic championship and won the Long Beach race in her first start with Polestar Racing; she eventually won three races. Plucked by PKV Racing to work the Champ Car World Series, she went to Dale Coyne Racing in 2007 in the first - and only - season for the DP01 chassis. There she learned to develop that car and was quite successful in it, taking two sixth-place results. Fans of the series will always remember her momentous accident at Road America in 2006, where she walked away and, in fact, attended the Atlantic championship banquet that night!

It was the conditions. Trying to get the tires up to temperature was quite the challenge.

Katherine Legge on challenges of 2017 Rolex 24

The going was fallow in the US for the Legge following the closure of Champ Car, and she joined the DTM series in Europe, and she returned to the USA in 2012 to work the IndyCar Series with Dragon Racing. She drove the Indianapolis 500 as a one-off in 2013.

Katherine Legge had another opportunity with a new program when she joined DeltaWing Racing, as that car was introduced in American Le Mans Series, shortly before it merged with GrandAm to form IMSA. She helped develop that car, which has since been pulled from competition.

Legge caught the attention of Honda Performance Development (HPD) and Acura, who entered the GTD class for 2017 with Michael Shank Racing (MSR), prepping two Acura NSX racecars for IMSA competition, No. 93 (for the year HPD began operation) and No. 86, designated for the first year of Acura production.

Legge, paired with Andy Lally for the full season, started testing just last fall in preparation for this weekend’s 55th Rolex 24 at Daytona. It was the first time for both MSR and Legge in the GTD category and they didn’t get to test but four times before the twice-around-the clock classic.

Still, with two hours remaining in the race, both Acura NSX cars were in the top six in the largest class (27) of cars on the 55-car grid. “I’ve been so fortunate with this program,” Legge said. “MSR is such a great team, I’ve got awesome teammates and HPD/Acura have been really great. I can’t say enough good things. If you told me we’d both be running inside the top six with two hours remaining, well, that’s pretty amazing. It’s been phenomenal.”

In a race governed by fortune and ruled by always-contrasting weather conditions, coupled with long periods of darkness, success is never a given - especially with two hours left in the game. “Our success thus far is a testament to the hard work the guys put in. The guys at the shop are at it 24/7, Mike’s been losing hair,” Legge laughed, “the guys at HPD, they had a good product from the start. RealTime Racing got the car before we did and they did a lot of development before we even saw it, so [our success is] testament to them, as well.”

Legge has been a bit surprised by the speed difference between her car and the competition’s, in particular on the banking where her competitors have been able to pass at will. “I’m so new to GTD and this is the first GT car I’ve ever raced,” she said, “in the rain, at night, in a 24-hour race. No pressure,” she laughed. “I just try to keep my head down and control the things I can control. I let everyone else take care of the rest of it… “

Conditions were “horrific” in the massive rain during the over-long night portion of the race. “We couldn’t get any heat into the tires, even though Continental does a great job. It was the conditions. Trying to get the tires up to temperature was quite the challenge. We’ve had no other issues with tires, other than trying to get heat into them. And we’ve had no mechanical issues,” as she looked for something wooden to knock upon.

Thankful to be with MSR

The 36-year-old racer feels incredibly lucky to be with the Michael Shank Racing team, to be working with Honda Performance Development and with Acura. “Driving a GT car is so different from anything I’ve ever done, in the wet, in the night, no pressure! The weather equalizes everyone,” she said as she left to support her team in the final hours of this endurance classic.

Despite the best efforts of Katherine Legge and her co-drivers, Lally, Mark Wilkins and Graham Rahal, damage incurred earlier in the race knocked the No. 93 Acura NSX out of the endurance contest with just half an hour left to run. Placing 29th overall and 11th in class, the quartet still were gratified to see the No. 86 earn fifth in class and take GTD class honors in the North American Endurance Championship of four long races on the calendar (Daytona, Sebring, Watkins Glen, Petit Le Mans).

Team owner Michael Shank was happy with the overall result for the two-car endeavor. “The key to this result was constantly digging and never stopping - with a plan. Having a plan helped us a lot here; we talked a lot about the things that could happen in the race and we were ready for them. Every time we went into the pit box,” he said, “we came out in better position than we were when we went in. I’m thankful, but I’m disappointed because both of our cars should have been in the top five with no problem. We’re looking forward to a great year ahead.”