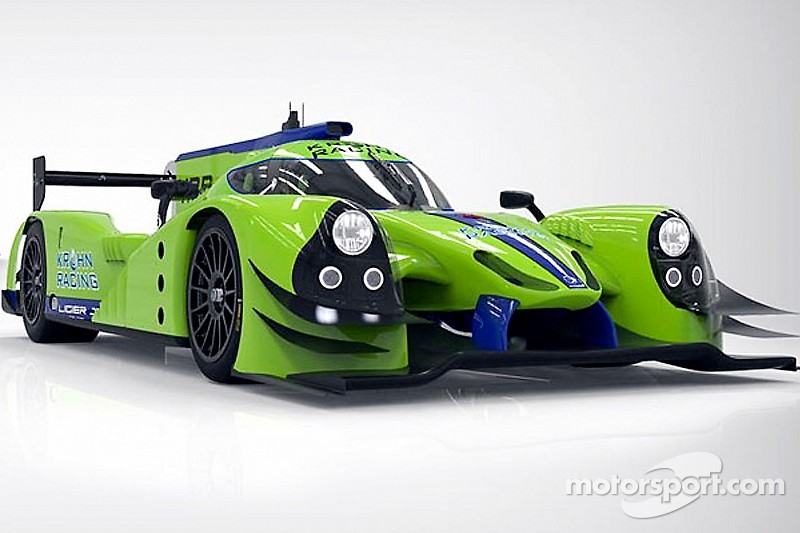 Krohn Racing is making the jump up to LMP2 come 2015 and so far, everything is looking good.

In their first American shakedown, Krohn Racing drivers Tracy Krohn and Nic Jonsson were able to get behind the wheel of Oak Racing’s Ligier LS P2 car powered by an HPD engine.

The car they ran was the same car that they shook down at Circuit de Nevers Magny-Cours after Le Mans and was also run by Gustavo Yacaman and Alex Brundle to a second place finish in the Tudor United SportsCar Championship race at Circuit of the Americas. The main difference in 2015 will be the engine as Krohn Racing will have Judd power behind the cockpit.

It’s an act of faith. You have to believe that the car’s going to turn when your mind’s telling you it’s not going to make that turn

The car ran on Dunlop tires in the morning session and after lunch was fitted with Continentals. The team ran the car on Dunlops because they were primarily designed for an LMP2 car, but the team stressed that no decision has been made about tires for 2015. The Continental tires were run because when the team runs at the 24 Hours of Daytona and at the 12 Hours of Sebring, Continentals will be mandated per the TUSC rules.

Brundle shook the car down for the first run on each tire before handing the car off to Krohn and Jonsson.

“The car is quite a lot different on the Continental tire," Brundle told Motorsport.com. "I think it generates a little bit less grip, obviously Continental have put together a tire which has to run for multiple classes so there’s a little bit more of a compromise from their side there, so the Dunlop is perhaps a little bit more suited for the car, being an LMP2 tire."

"So yeah, it takes a little bit of adjustment in terms of braking zones and high speed corners, specifically. The car can handle a bit less lateral g-forces but overall the car feels great on both tires. We got [a] very good handle on the setup changes we need to make so we can pretty much have perfect balance on both tires straight out of the box now, which is really important, it’s what we came here for."

From GT to LMP2

The biggest difference, however, will be how the LMP2 car handles to the drivers behind the wheel. Jonsson and Krohn have been driving a Ferrari 458 Italia in the GT category of the FIA World Endurance Championship and also in TUSC, so it’s a big change in driving style between a production-based car and a prototype. Krohn detailed the differences in how to drive the LMP2 car compared to the GT cars he had driven before.

“It’s an act of faith," explained Krohn. "You have to believe that the car’s going to turn when your mind’s telling you it’s not going to make that turn. So much more downforce that it’s just a matter for me of gradients, going into gradients and finally you just get up and say, ‘I’m going to do it this time,’ and hold your breath and turn left and turn right and all of a sudden you say, ‘I’ve got more grip than I ever thought!’ and then it’s all good.

“It’s obviously a completely different type of car, different characteristics and stuff like that so for me it makes me think back to my old days when I drove single seaters, and everything from F3 to F3000 to IndyCars and then Group C back in those days as well. It’s fantastic to be back in a high downforce car, a very well built car like the Ligier, and we really are looking forward to the development work with this car and getting up to speed,

As for how the car felt compared to what he had driven before, Krohn praised the Ligier.