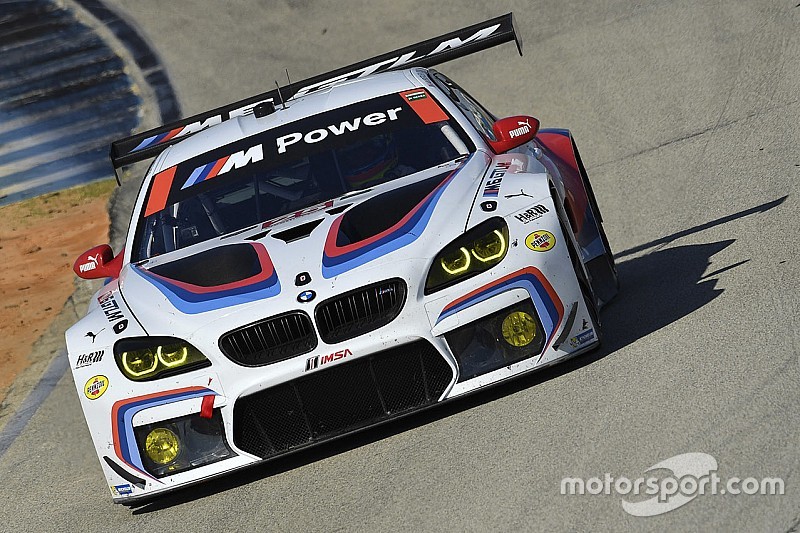 Canadian driver Kuno Wittmer thinks he and his teammates have a genuine chance to finish on the podium of their class in the 12 Hours of Sebring, Round 2 of the IMSA WeatherTech Sportscar Championship in March.

Kuno Wittmer, Bill Auberlen and Alexander Sims shared the driving duties of one Team RLL BMW M6 GTLM during a recent two-day test on the Sebring road course in Florida.

The Montreal-native was born into a racing family, and he inherited the racing bug from his grandfather, Kuno, and his father, Patrik. After he raced karts, the 16-year-old Kuno was named Rookie of the Year in the 1999 Canadian Formula Ford Championship. Kuno then switched to tin tops, competing in the Canadian Honda Michelin series and the US World Challenge.

The 34-year-old is a now works BMW Motorsport driver and competes in the IMSA series.

“The BMW GTLM is a very complex program because our car was not specifically designed for the GTLM category,” Wittmer told Motorsport.com. “Our M6 is a GT3 car that’s been modified for GTLM racing and set-up to run on Michelin tires with the help of BMW Motorsport in Munich and Rahal Letterman in Ohio.”

Wittmer and his teammates just competed a two-day test at Sebring.

“Sebring is a long track, very bumpy, with several difficult corners, and the owners are pretty flexile in letting us test for long hours,” the Canadian continued. “Since October 2016, we’ve already driven some 15,000km at Sebring. The 12 Hours event will be held in two weeks. It’s a tough race, very physical; it’s like a long sprint. In fact, it’s more difficult than the 24 Hours of Daytona. We’re only three drivers per car in Sebring in comparison to four in Daytona. The series let us have more power from the engine for Sebring to be a little more competitive. I think we can finish on the podium.”

A dream to come true

Kuno Wittmer will fulfil one of his lifetime dreams this summer, as he will contest the famed 24 Hours of the Nürburgring on the fast, dangerous but fascinating 14-mile long Nordschleife.

“I raced on the Nordschleife last year in a VLN event [with fellow countryman Bruno Spengler] to get my license,” Wittmer explained. “VLN is an endurance series based at the Nürburgring. There are always some 100,000 fans camping around the race track, even if the weather is terrible. They’re really a bunch of passionate people!

“It’s a stunning race track. There’s a piece of history in each corner. Running the prestigious 24 Hours of Le Mans in 2013 with Team Viper was a dream come true. I hope to return there. But this year, the big thing for me is to contest the 24 Hours of the Nürburgring. BMW Motorsport will enter three cars and 21 drivers. I think we can do well. The car is well suited for this track. The conditions change every two minutes. Driving on this long track is incredibly difficult. The fog, the rain and even the smoke of the BBQs make our life pretty difficult, as visibility is not that great.”

Wittmer insists that running in heavy traffic is the key to success, even if the track is 14-mile long. “At the 24 Hours of Le Mans or the 24 Hours of Spe-Francorchamps, the speed difference between the various race cars is not that great.

But during the 24 hours of the Nürburgring, there’s about 200 cars of various categories on the track at the same time. Our BMW M6 has some 550 horsepower under the hood. And you race against guys who, for example, are behind the wheel of a 110-horsepower VW Polo! Managing traffic is the big thing over there,” Wittmer concluded.