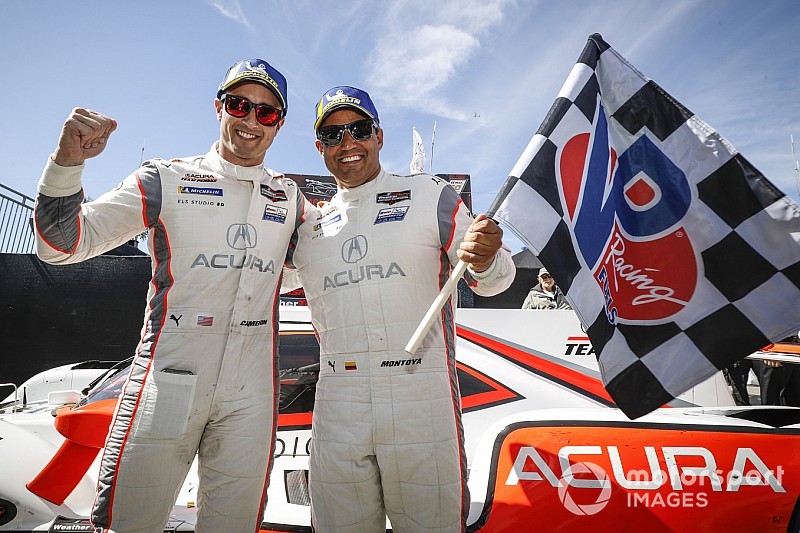 At the start, despite a lockup into Turn 2, Ricky Taylor held onto the lead and Montoya did a good enough job to repel Jordan Taylor’s challenge in the Wayne Taylor Racing Cadillac to retain an Acura ARX-05 1-2.

Behind the #10 WTR entry, Jonathan Bomarito came muscling through from sixth in the #55 Mazda to grab fourth ahead of Filipe Albuquerque and Felipe Nasr in the two Action Express Racing Cadillacs. Tristan Nunez, meanwhile, had lost out in the second Mazda, falling from fourth to eighth, behind Misha Goikhberg’s JDC-Miller Cadillac.

Bomarito, challenging Taylor for third, got caught up in GTD traffic and lost out to Albuquerque on Lap 9. Up front, the two Acuras ran a second apart, around 4sec clear of the WTR Cadillac which had a similar margin over the #5 AXR Cadillac. A couple laps later, Nunez and Simon Trummer displaced Goikhberg for seventh and eighth respectively.

Nasr pitted on Lap 23, while teammate Albuquerque – struggling to retain fourth and now eight seconds behind J. Taylor, stopped a couple laps later. R. Taylor stayed on board the #7 Acura after its first stop, but Cameron took over the #6 from Montoya. Bomarito remained behind Albuquerque when he emerged. Meanwhile Nunez stayed out with the #77 Mazda for a tad longer, finally stopping on Lap 29, while Bomarito fell behind Nasr into sixth.

On Lap 42, Cameron passed teammate R. Taylor for the lead as they negotiated traffic, while J. Taylor was only 1.5sec adrift of the Acuras.

Albuquerque was the first of the Prototypes to stop for a second time on Lap 54. When R. Taylor pitted the #7 Acura, he handed over to Castroneves, who emerged still behind Cameron, and then fell off the track after a collision with the #38 P2 car of Cameron Cassels.

Still, the three-time Indy 500 winner had the momentum to pass the later-stopping WTR Cadillac which Jordan Taylor had relinquished to Renger van der Zande. Castroneves was, however, now 10sec down on the sister car of Cameron.

Nunez was again a late stopper leaving the Acuras still in front ahead of WTR and the two AXR Cadillacs – now driven by Joao Barbosa and Pipo Derani – followed by the two Mazdas, now driven by Harry Tincknell and Oliver Jarvis. Derani would pass teammate Albuquerque for fourth on Lap 75.

The two AXR cars stopped on Lap 86 with 43mins to go, and the other Prototypes soon followed, but Tincknell, who had put in a sterling drive, could not get the car in gear, and the Joest team had to find him a new steering wheel.

Derani’s attempt to get past van der Zande for third didn’t pay off and he went off track, as the Dutchman closed on Castroneves for second place. Castroneves then pulled away, and van der Zande instead focused on his mirrors, but it wasn’t enough: Derani went through at Turn 2 with 10mins to go and grabbed third.

Cameron drove cautiously through the knots of traffic in the closing stint, eventually crossing the line 9.784sec ahead of Castroneves, and with Nasr/Derani taking third, the #6 Penske drivers are now 12 points ahead of the reigning champions.

Van der Zande stayed within one second of Derani at the checkered flag, and Jarvis was a similar distance behind Barbosa.

Polesitter Jesse Krohn’s BMW M8 GTE retained its advantage at the drop of the green ahead of Dirk Muller’s #66 Ford GT, with Tom Blomqvist in the second BMW ahead of Laurens Vanthoor’s #912 Porsche 911 RSR. Ryan Briscoe in the second Ford initially led Nick Tandy’s Porsche, as the Corvette C7.Rs slumped to seventh and eighth in class.

On Lap 13, Muller passed Krohn for the lead when the M8 appeared to stumble under acceleration out of Turn 2.

Corvette Racing stopped the #3 and Jan Magnussen handed over to Antonio Garcia on Lap 21, and the following lap Oliver Gavin left the seat of the #4 C7.R for Tommy Milner.

Briscoe spun the #67 at the final turn, on lap 26, before handing over to Richard Westbrook, while five laps later his teammate Muller pitted to hand over to Joey Hand.

Krohn, who inherited the lead from Muller, went until Lap 36 before stopping and handing off to John Edwards, who emerged in fourth, just ahead of teammate Connor De Phillippi. Up ahead, the very early stopping Corvette C7.Rs had thus moved into first and third, split by Hand’s Ford. The Porsches of Earl Bamber and Patrick Pilet ran sixth and eighth, split by Westbrook’s Ford.

Hand was applying heavy pressure on Garcia by Lap 50, the same lap when – 10sec further back – Edwards moved his BMW around Milner’s Corvette for fourth.

The Corvettes early stopping again, Hand’s Ford led the two BMWs, with Westbrook in fourth now running ahead of both Porsches. Once the ‘on-strategy’ cars topped, Corvette ran 1-2, Garcia 6sec ahead of Milner, with Hand, Edwards and De Phillippi respectively 13, 31 and 34sec further back. Garcia would make his third stop with 43mins to go.

In the closing stages, the Corvettes of Garcia and Milner slashed into their disadvantage to the BMWs and with 15mins to go, Garcia was filling De Phillippi’s mirrors, with Edwards just a further 2sec ahead. With 10mins to go, both Corvettes demoted the #25 BMW to fifth within just four corners as they negotiated GTD traffic.

Edwards was easily able to take second, albeit 20sec behind Hand’s Ford.

Corey Lewis converted his pole in the Paul Miller Racing Lamborghini Huracan GT3 into an early lead, while Trent Hindman lost out to Cooper MacNeil’s Scuderia Corsa Ferrari 488 GT3, although within a couple of laps the Meyer Shank Racing Acura NSX GT3 was back up into second.

Hindman got muscled aside by MacNeil and Robichon on Lap 10.

The GTD stops started on Lap 30, but Lewis didn’t stop until Lap 40 before handing off to Bryan Sellers, who remained in front, ahead of Toni Vilander now in the #63 Ferrari, Scott Hargrove in the Pfaff Porsche, Bill Auberlen in the Turner BMW and Jeroen Bleekemolen in the Riley Mercedes.

A very late stop for the #86 Meyer Shank Racing Acura left Mario Farnbacher at the back of the class. By Lap 46, he was barely clinging on to the lead lap, and within eight laps, Sellers had put Farnbacher a lap down.

On Lap 50, Bleekemolen tried from too far back to pass Auberlen at Turn 2 and nudged the BMW into a spin, for which he was issued a drive-through penalty and fell to seventh – albeit still two cars ahead of the unfortunate Auberlen.

Lally was relentless and moved into third in the final half-hour, ahead of Hargrove who found himself edged off the track briefly by a Lexus.

With a minute to go, Bleekemolen passed Legge into Turn 2 to take fifth place. Out front, Sellers ran out the winner by half a minute over Vilander, with Lally retaining third ahead of Hargrove.