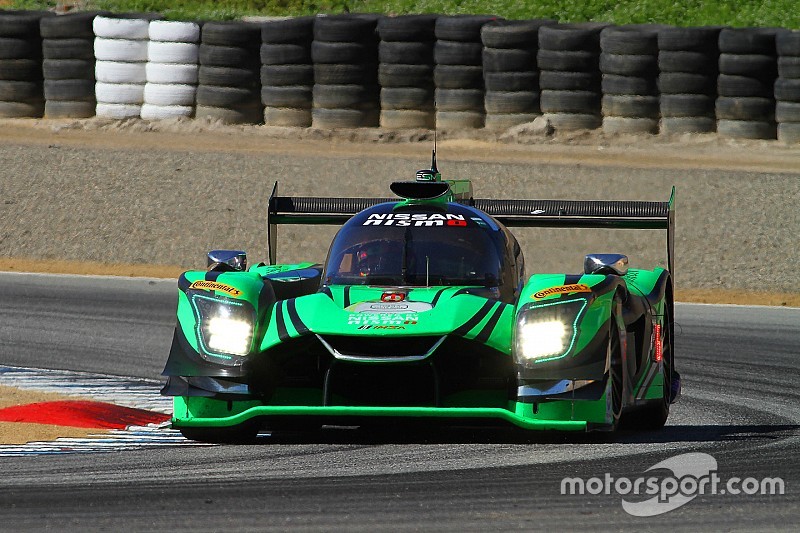 Ryan Dalziel drove his ESM Nissan to the top of the time charts in second practice for the IMSA WeatherTech SportsCar Championship race at Laguna Seca, as Risi Competizione and Michael Shank Racing starred in GTLM and GTD respectively.

Dalziel was a mere 0.086sec quicker than this morning’s pacesetting car, the Wayne Taylor Racing Cadilllac, but that was enough to put the Scot on top and ahead of teammate Pipo Derani by over 0.4sec.

Christian Fittipaldi was fourth for Action Express Racing, just ahead of Renger Van Der Zande in the Visit Florida Racing Ligier with Dane Cameron sixth in the second AXR Caddy.

Toni Vilander’s Risi Competizione Ferrari 488 was over four tenths clear of Alexander Sims in the BMW M6 to head the GT Le Mans class, with the #4 Chevrolet Corvette C7.R again occupying third, this time in the hands of Oliver Gavin.

Ozz Negri grabbed top spot in GT Daytona, driving the #86 Acura NSX run by Michael Shank Racing, and it moved him a tenth of a second ahead of Daniel Morad in the Alegra Porsche 911 GT3 and Jorg Bergmeister in the Park Place Porsche. Alessandro Balzan went P4 in the Scuderia Corsa Ferrari, with CORE autosport’s Colin Braun making it three 911s in the top five.

Third practice begins at 8am local/11am ET tomorrow, with qualifying commencing at 11.30am local/2.30pm ET.

Jan Magnussen: No backing off as we close in on IMSA title

Laguna Seca IMSA: Cadillac and Ford back on top in FP3