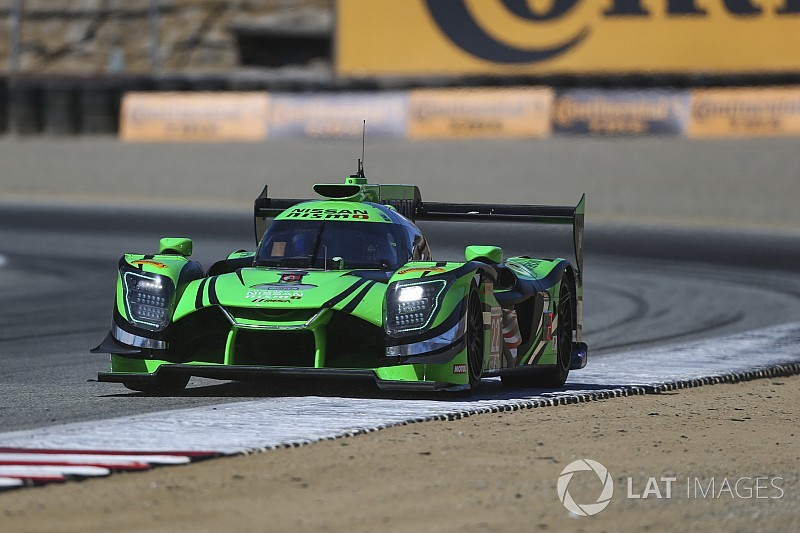 There was a shunt at the start when Misha Goikhberg’s JDC-Miller Motorsport Oreca clipped the back of Joao Barbosa’s Action Express Racing Cadillac, spinning it broadside.

Dirk Muller’s #66 Ford GT swerved but still caught the tail of the stricken DPi-V.R, while Nick Tandy’s Porsche 911 RSR T-boned it and shot it across the track into the pitwall. Fortunately, all drivers escaped injury.

Mean time, up front, Dane Cameron and Helio Castroneves had taken their Acura ARX-05s around polesitter Jordan Taylor’s Cadillac, while Jonathan Bomarito and Oliver Jarvis were up to fourth and fifth in the Mazda RT24-Ps.

Sebastian Saavedra was sixth for AFS/PR1 Mathiasen Motorsports (in the team’s first race since switching from Ligier to Oreca), ahead of the #2 ESM Nissan piloted by Scott Sharp and Eric Curran in the second AXR Cadillac.

They remained in this order for the second restart, aside from Goikhberg getting around Sharp, and Curran pitting and handing over to Felipe Nasr.

The field had completed 19 laps before Taylor’s WTR Cadillac ground to a halt without drive on its 19th lap. The restart saw Derani spin as he attempted to pass Goikhberg but kept his engine alive.

Cameron pulled away from Castroneves, and on Lap 30, Bomarito got around the three-time Indy 500 winner as they lapped GT traffic, and drove away from him to start applying pressure on Cameron. He got within one second of the leader before pitting on Lap 38 and handed over to Tincknell.

Five seconds back, teammate Jarvis was starting to apply similar pressure to Castroneves but when Jarvis stopped to hand on to Tristan Nunez, the Joest team struggled to get the car going again.

Acura predictably had no such problems as Cameron and Castroneves handed off to Juan Pablo Montoya and Ricky Taylor respectively, but Montoya on cold tires understeered out into the sand, and by the end of the lap he had lost a place to Nasr who had been putting in a stirring drive.

More crucially, Montoya was also now behind the #55 Mazda of Tincknell which took the lead. He had a seven second lead over Nasr until the full-course caution flew for a stranded GTD car.

Tincknell kept his head and kept the lead on the Lap 51 restart, staying well clear of Nasr, the #31 Cadillac chased by Montoya, Taylor, Derani and Colin Braun in the CORE autosport Oreca.

As the #55 Mazda pulled 10sec clear at the front, his five nearest pursuers ran in close convoy, and on Lap 58 Braun got around Derani. The Brazilian retaliated a couple of laps later, then pulled a nasty block to keep Braun behind, and then passed Taylor’s Acura to grab fourth.

Not far ahead ­– although 20sec behind leader Tincknell – Nasr and Montoya were locked in a fierce battle, and Derani was soon part of that fight. They battled hard at the start of Lap 68, the ESM Nissan prevailing, but then all three stopped over the next two laps.

However, Taylor, who had made his last stop a couple of laps earlier, was able to jump teammate Montoya, but JPM was having none of that and passed the other Acura around the outside of Turn 2.

Meanwhile Nasr had suffered a poor out-lap so was now three seconds behind that pair, and it gave Derani a clear shot at Tincknell. The gap was down to 8sec on Lap 78 when Tincknell tried outbraking the AFS/PR1 car driven by Gustavo Yacaman at Turn 5, but he was coming from too far back.

Yacaman turned in, squeezed the Mazda up on the curb and it spun. By the time Tincknell got going again, he was down to sixth and half a minute behind, with only half an hour left to try and recover.

It left Derani with a dozen seconds ahead of the fierce battle between the Penske Acuras and Braun, which had seen Taylor get ahead of Montoya with 25mins left to run. Braun, too, got around JPM.

With only three minutes to go, Taylor collided with a GTD car, damaging his front-left suspension, handing second to Braun and elevating a battle between Montoya and the recovering Tincknell a fight for the final podium place.

However, Montoya held on to finish 13.4 sec behind winner Derani, and 3sec behind Braun.

The demise of the #66 Ford at the start left Corvette C7.Rs running 1-2, Oliver Gavin ahead of Jan Magnussen, with Alexander Sims and Jesse Krohn in the two BMWs, followed by Earl Bamber’s Porsche and Ryan Briscoe’s Ford.

Most pitted when Taylor’s Caddy was stranded on course, getting in just before the pits were closed and the full-course caution flew, and they emerged with Magnussen now ahead of Gavin, and with Westbrook – having taken over the #67 Ford – ahead of Sims’ BMW, but all were behind Krohn and Bamber who had stayed out.

However, a miserable day for Ford was completed when Westbrook clashed with Gavin exiting Turn 2 and suffered a suspected broken steering arm, causing him to go off the road and then limp to the pits.

During the fourth caution, all cars stopped, with John Edwards taking over the #24 BMW M8 from Krohn and emerging at the head of the class, in front of Antonio Garcia (#3 Corvette), Tommy Milner (#4 Corvette), Connor De Phillippi (#25 BMW) and Laurens Vanthoor (#912 Porsche). Soon after the restart, however, Garcia was past Edwards.

Yet following the Corvette pair’s final round of stops, they soon discovered that the BMWs and Vanthoor were trying to make it on only two stops.

Edwards had to make a splash-n-dash leaving teammate De Phillippi in front and falling behind championship leader Garcia, but the Corvette driver couldn’t catch De Phillippi and Vanthoor before the checkered flag.

However, Legge was in a better state than Meyer Shank Racing Acura teammate Justin Marks, who got involved in a shunt that flipped up his hood, and sent the Turner Motorsports BMW M6 into the tire wall.

At the third attempt at a start, Long’s 911 got into the lead ahead of Snow, and Legge also passed the rapidly fading Huracan, so she was able to grab the lead when Long pitted and handed over to Christina Nielsen. On Lap 30, Snow handed over to Bryan Sellers.

Auberlen, who had recovered from being rudely shunted, sadly ground to a halt on his 41st lap, causing a caution. The resultant pitstops saw Alvaro Parente take over the MSR Acura from Legge, and restart ahead of Dominik Baumann in the #14 Lexus RC F, Bleekemolen, Jack Hawksworth (Lexus), Gunnar Jeannette (Ferrari) and Andy Lally (Magnus Audi R8).

Sellers, however, swiftly dealt with Lally on the restart and started hassling Jeannette. He slipped past into fifth three laps later, and then dismissed Hawksworth (who also lot a spot to Lally), and Baumann to move into third with 50mins to go.

Sellers made his final stop with 37mins to go and on fresh tires, he flew – fast enough to easily vault Parente for third – and close on Jorg Bergmeister’s Park Place Motorsports Porsche in the lead, and Bleekemolen in the Riley Mercedes.

With 15mins to go, this quartet was running nose-to-tail, and Parente demoted Sellers with eight minutes to go. With five to go, he was into second as Bleekemolen simply couldn’t hold him off, and with four to go, Bergmeister was running on fumes.

Parente’s Acura plunged down the inside at Turn 2, and the Porsche had to give way. With Sellers finishing only fourth, Parente’s partner Legge has made significant inroads in the Lamborghini driver’s points lead.