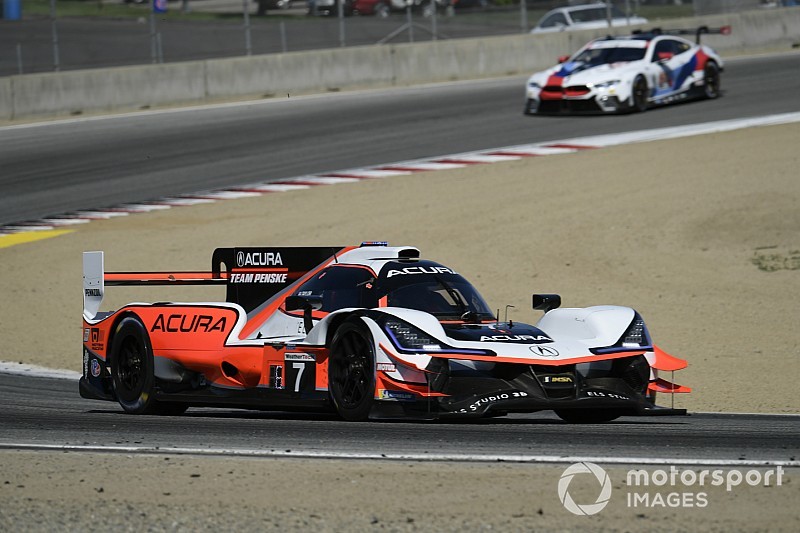 Acura Team Penske maintained its supremacy in third practice for this weekend's Laguna Seca IMSA WeatherTech SportsCar Championship round, with Ricky Taylor setting the pace in the #7 car.

Taylor laid down a benchmark of 1m15.497s early on in the one-hour Saturday morning session, but the #7 Acura caused a red flag when Helio Castroneves beached the pace-setting ARX-05 in the gravel at the top of the Corkscrew.

Castroneves avoided picking up any significant damage, though, and the car was back out for the final part of the session, as championship leader Juan Pablo Montoya made a late jump up to second in the sister #6 machine with a 1m15.857s effort.

Best of the rest was the #10 Wayne Taylor Racing Cadillac DPi-V.R, which has been boosted by Balance of Performance adjustments for this round, with Renger van der Zande ending up 0.538s off the pace in third.

Oliver Jarvis's early benchmark behind the wheel of the #77 Mazda RT24-P was enough for fourth in the end, ahead of the #5 Action Express Racing Cadillac of Filipe Albuquerque and the second of the Joest-run Mazdas, the #55 car of Harry Tincknell.

The title-contending #31 AXR Cadillac ended up down in ninth, with ex-Formula 1 racer Felipe Nasr's best effort putting that car 1.104s off the pace.

Dirk Muller made it two Fords inside the top three in the #66 GT, ahead of Oliver Gavin in the quicker of the Corvette C7.Rs, while both Porsche 911 RSRs ended up propping up the class order in seventh and eighth places.