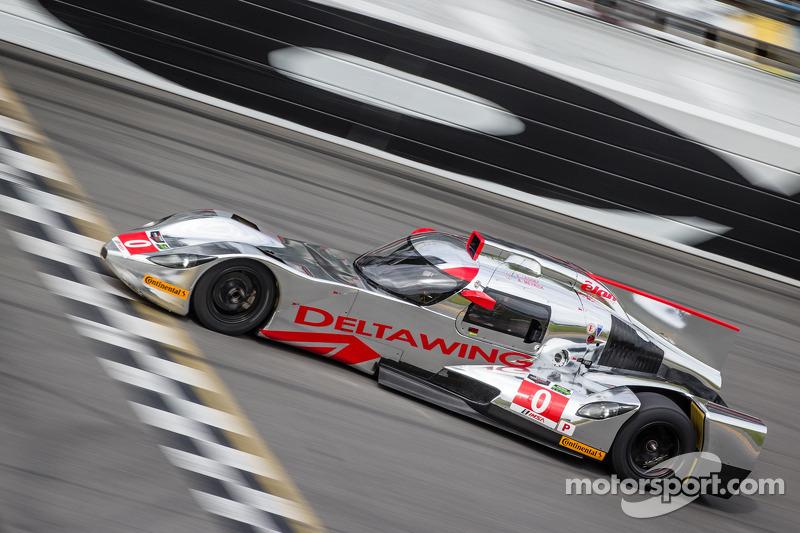 Due to the tire issues which saw two DPs getting airborne, IMSA and Continental Tire officials decided Wednesday morning to suspend testing for Prototypes.

IMSA and Continental Tire officials decided Wednesday morning to suspend testing for Prototype (P) and Prototype Challenge (PC) race cars due to issues that came to light in Tuesday’s sessions. Because of its unique tire and technical package, however, the Elan-powered DeltaWing DWC13 was able to test and Katherine Legge recorded the fastest lap of the day at 1:40.833.

“I did it once before, in 2007, so I’m excited to be back here in the DeltaWing,” Legge said. “I’m excited that the two series have merged into a mega series. We had no idea what to expect in the DeltaWing with the banking, but it’s been good and competitive. We’re excited, both for the series and the car.” 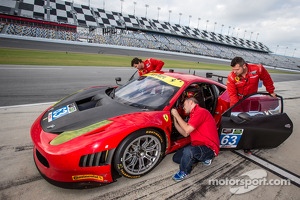 A total of 5,645 laps (20,096.2 miles) were turned over two days of testing on Daytona’s 3.56-mile, 12-turn road course. The Daytona sessions followed two days at Sebring International Raceway on Saturday and Sunday. Since the green flag dropped on the first Sebring session Saturday morning, a total of 30,642.26 testing miles were recorded.

The next scheduled official test will be the Roar Before the Rolex 24 on Jan. 3-5.

While Extreme Speed Motorsports created a new identity for itself in 2013 with a pair of HPD ARX-03b/Hondas in the American Le Mans Series presented by Tequila Patrón P2 class, the team also maintained a long association with Ferrari in the GT classes of both the ALMS and the GRAND-AM Rolex Sports Car Series.

“It’s been very productive,” said ESM Director of Operations Robin Hill. “We went to Sebring and were only going to run one day there, but we ended up staying for two days. We had a lot of development work to do for Honda and HPD, so even though we didn’t get much track time there, we got a lot of things accomplished. We came here with the components they’d fitted to the car working very well. Unfortunately, the test did get cut short, but in the light of safety and everything else, I think it’s a smart thing to do.”

With no prototype to test on Wednesday, the team’s sole focus was supporting the No. 72 Ferrari shared by Boris Rotenberg, Mauricio Mediani and Serguey Zlobin in the GTD class.

“We were approached by Michelotto, who builds the Ferraris, because we used to run the Ferraris,” Hill explained. “We had one GT3 and two GT2 cars, actually, at our shop. We had a European team that was very interested in coming to Daytona and they put them in contact with us. It was just sitting in our shop doing nothing and we’d like to sell it, ultimately. They asked if they could rent it and if we’d supply some support staff to help run it.

“Why not? It’s just a business venture. Hopefully, it makes us some money. It might stem into something long term, you never know. I can have guys standing around the shop or they can be standing around here and putting our name out there, and that’s why they’re here.”

Marsh Racing is making the step from the Rolex Series GT ranks to the P class in the new TUDOR Championship. While the red-and-white No. 31 Whelen Engineering Corvette DP may resemble the GT car, moving to the prototype has been a considerable learning experience for the team.

“Moving from the GT Corvette to the DP is a big change for the Whelen Motorsports crew,” said Eric Curran, who is co-driving with Boris Said. “We had a pretty good test at Sebring. This car is awesome. It’s a lot of fun to drive. It’s a different animal than our GT Corvette. This DP is fast, and all the bolt-on goodies are making it even faster.”

Both drivers are having trouble physically adjusting to the car, though.

“The hardest thing for me is sitting on the right side of the cockpit,” Curran said. “That’s the way the Coyote chassis is laid out.”

Said has a different problem.

“It’s been a little slow for me because I have a hard time fitting into it,” he explained. “But Hendrick Motorsports is making us a seat that I’ll be able to fit in. I like the new car compared with DPs I’ve raced in the past. It’s definitely a lot more fun to drive with the downforce.”

While entered in the Sebring and Daytona tests under the Horton Autosport banner, co-owner/driver Patrick Lindsey said the team is in negotiations for the return of Park Place Motorsports. Lindsey is testing with Jason Hart and Mike Vess as the team is working with his team’s new No. 73 Porsche GT America – with another car on the way.

“It’s been a pretty easy transition,” Lindsey said. “The cars are a lot different, yet pretty similar. It’s not like a big surprise. It has a new gearbox and new electronics. We’ve just been hammering out the little stuff.”

Hart said the car was tested at Sebring and Daytona “as delivered,” and the team will continue developing the car prior to the Roar Before the Rolex 24.

“The Porsche performed real well at Sebring and is pretty good here for a car that was bone stock exactly as delivered,” Hart said. “Now we can continue to work on the shock package and add a few bits to it. We’re excited to see the GTD field here, and I think it will keep growing.”

Park Place Motorsports finished third on three occasions last year with Lindsey co-driving with Patrick Long, finishing fifth in the team standings. The team is hoping to have a Porsche factory driver in its lineup in 2014.

“We didn’t have our share of luck last year,” Lindsey said. “We might have won Indy if not for a small mechanical problem. We’ve excited about the upcoming season.”

After campaigning the BMW M6 and M3 models since joining the Rolex Series in 2010, Turner Motorsport is looking to race the BMW Z4 in 2014 TUDOR Championship competition.

“We got our Z4 from a European GT3 team four weeks ago,” Turner said. “We ran it at Road Atlanta for a day of testing with Continental Tire. After a pretty successful test, we decided to bring it here.”

“We’re struggling a little as we adjust the car from GT3 to GTD specifications,” Cameron said. “We’re mainly coming to grips with the larger new wing that is used in GTD, and we’re trying to regain the car’s balance. It’s still a work in progress.”

In addition to preparing for its ninth season in the IMSA Continental Tire SportsCar Challenge, Fall-Line is looking for a full season in the TUDOR Championship GTD class with one or possibly two Audis.

“This past season was a matter of learning about the car,” said owner/driver Boden. “We didn’t have a consistent driver lineup. We learned a lot more at this test. It was important getting the drivers comfortable with the car. There are quite a few new teams here – and a lot of new competition, and it’s pretty close. I’m pretty impressed to see the field in GTD.”

With Boden set to concentrate on driving one of his team’s BMW M3s in the Grand Sport (GS) class of the Continental Tire SportsCar Challenge in 2014, Charles Putman, Charles Espenlaub and Al Carter shared the Audi with driver Bryan Sellers – who drove the team’s GS car in 2013 – as well as Audi factory driver Christopher Mies at the test.

“It’s tough getting the power down,” Carter said. “It was like getting some drifting practice getting on the gas. But that’s why we’re here, testing.”

When it came time to take the first laps in IMSA testing for the No. 66 TRG-AMR Aston Martin Vantage, car owner Kevin Buckler put himself behind the wheel when testing began on Tuesday morning.

“I sorted it out, and it’s a good thing I did, because I found a brake problem,” said Buckler, overall winner of the 2003 Rolex 24. “I have a lot of experience here at Daytona, so I wanted to get it sorted out before putting the young bucks in it.”

David Block, James Davison and Kevin Estre did the bulk of the testing in the car.

Preseason testing not only gives teams the opportunity to test new cars and drivers. For Snow Racing/Wright Motorsports and JDX Racing, it’s allowing two teams to work together as a possible first step for a merger or technical partnership.

“It was well worth coming down here and getting the time in,” John Wright said. “It’s been a good test, and we’re very pleased with the new car. We helped JDX with three races last year, and we felt this test would be a good opportunity to help them out. We’re still exploring our options. That’s what testing is all about.”

Wright ran a Porsche for Brumos Racing for that team’s last race in 2013. He prepped the new Porsche GT America at the Brumos shop.

“It’s ironic, because when we found our regular number (62) was already taken, we took No. 58 as a tribute to Brumos,” Wright said.

Snow was very pleased with the new Porsche GT America.

“I like everything about it,” said Snow, who won the IMSA Porsche GT3 Cup Challenge USA by Yokohama championship in 2013 for Wright. “It’s a lot cleaner and smoother, and the paddle shifting is super. The dashboard is different, but you get a lot more information out of it. It’s a great car.”

Preparing for his 21st Rolex 24, Wright’s relationship with his driver goes back when he ran Porsches for his parents, Martin and Melanie Snow.

“He may be 17, but his mechanical feedback is very mature,” Wright said. “He’s very interested in the mechanics of the cars, and likes working on them.”

One step forward, two steps back