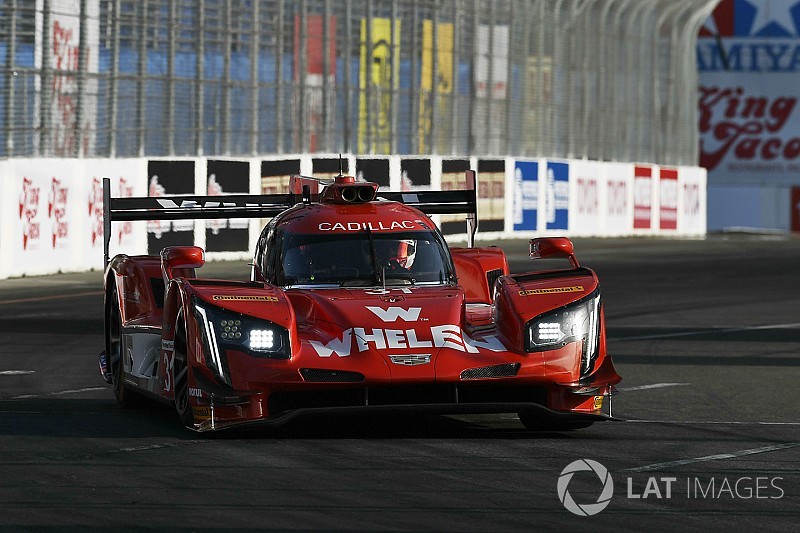 Ex-Sauber Formula 1 star Nasr set the quickest time in the final five minutes of the two-hour session in the #31 Cadillac DPi-V.R he shares with Eric Curran, dislodging Team Penske's Helio Castroneves from the top of the timesheets with a 1m13.720s.

The Brazilian subsequently improved to a 1m13.582s, moments before Albuquerque slotted into second in the #5 Cadillac with a time just 0.093s slower.

Castroneves led much of the latter half of the session in the #7 Acura ARX-05 DPi after surging to the head of the field with a little over 40 minutes remaining, but teammate Ricky Taylor was unable to improve when he took over the car for the final part of the session and was demoted to third.

Just 0.008s behind in fourth place was the best of the Joest-run Mazda RT24-Ps of Oliver Jarvis, while Jordan Taylor made it three Cadillacs in the top five in the #10 Wayne Taylor Racing-run machine ahead of Juan Pablo Montoya in the #6 Penske-Acura.

Sebring 12 Hour-winning squad Extreme Speed Motorsports could do no better than eighth and ninth with its pair of Onroak-Nissan DPis, behind the second of the Mazdas.

With DPi cars locking out the top nine positions, best of the LMP2 runners was the #99 JDC-Miller Motorsports Oreca-Gibson whose best time was set by Stephen Simpson.

The Chip Ganassi Racing-run Ford GTs locked out the top two spots in the GT Le Mans division, with both Ryan Briscoe and Dirk Muller breaching the 1m18s barrier in the final stages.

Porsche held the advantage for much of the session, but Earl Bamber's best effort of 1m18.012s in the #912 car proved only good enough for third in the final reckoning.

Nick Tandy caused one of two red flags in the #911 Porsche when he hit the barriers at Turn 8 with just over an hour to go, but the car ended up fourth-fastest in the hands of Patrick Pilet.

The two Corvette C7.Rs were fifth and sixth-fastest ahead of BMW's pair of RLL-run M8s, which brought up the 22-car field in the absence of the GT Daytona class.

Colin Braun caused the second stoppage mere minutes after the first when he tapped the wall at Turn 8 in the CORE autosport Oreca-Gibson LMP2.