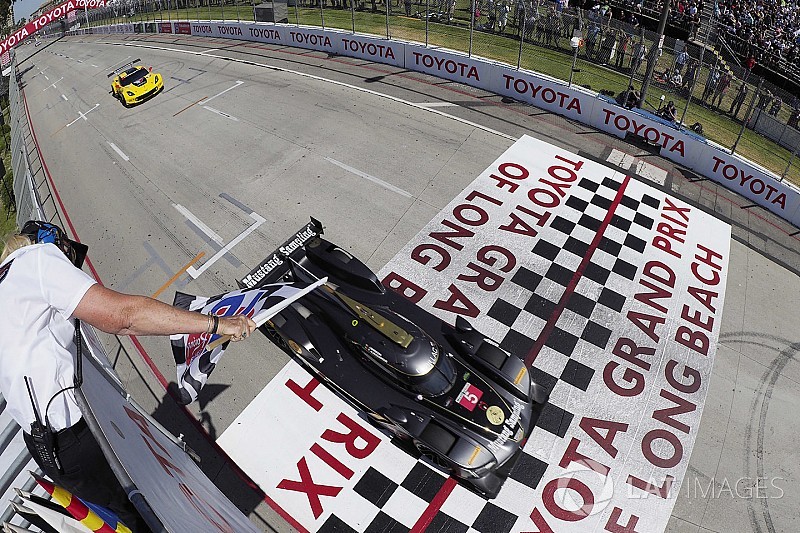 Split strategies by Action Express Racing paid off perfectly for Filipe Albuquerque and Joao Barbosa in a thrilling IMSA race at Long Beach, as a Corvette win in GTLM rounded off a great day for GM.

However, a collision between Gustavo Yacaman and Kyle Masson down at Turn 3 brought out an immediate yellow flag.

On the restart, Nasr was all over Montoya, and the pair remained locked in combat and pulling 2s clear of Castroneves. Finally, at Turn 9 on Lap 21, Nasr took the lead while almost immediately the full-course-yellow flew once to retrieve the JDC-Miller stranded at Turn 1 run-off.

All the prototypes stopped except Nasr and Montoya, and Mazda Team Joest jumped Acura Team Penske to send out Jonathan Bomarito – replacing Tincknell – in third ahead of Castroneves’ co-driver, Ricky Taylor.

Albuquerque was fifth having taken over from Barbosa in Cadillac #5. ESM Nissan had also got the Scott Sharp/Ryan Dalziel #2 car ahead of WTR Caddy, now driven by Jordan Taylor.

The restart was clean for the Prototypes, but it took only a couple of laps for Taylor to get his Acura ARX-05 back ahead of Bomarito’s Mazda RT24-P.

More remarkable was Nasr’s rate of departure from Montoya, with the Brazilian pulling a 10sec gap by Lap 35. Five seconds behind, Taylor was having to fend off a charging Albuquerque, chased by Dalziel and Jordan Taylor.

Nasr pitted with 45 minutes to go to hand over to Eric Curran, and Montoya followed suit five minutes later to hand over to Dane Cameron, but it was a very slow stop by Penske standards.

Up front, Albuquerque now led Taylor by six seconds, with Dalziel a surprising third, a further 6s adrift and desperately holding off Jordan Taylor, with Bomarito and Oliver Jarvis fifth and sixth in the two Mazdas. However, Dalziel then pulled away from the WTR Caddy to start filling the mirrors of the #7 Acura, and the Mazdas came back into the picture, hassling Jordan Taylor.

Then everyone was in convoy again, with 25mins to go – sizable chunks of debris needed removing from the pitstraight. On the restart, Dalziel muscled past the Acura of Taylor to slot the Nissan into second, and for a while was able to stay within two seconds of Albuquerque.

Jordan Taylor now moved onto the tail of his brother, while on Lap 60, Jarvis passed teammate Bomarito for fifth place at Turn 1.

Under intense pressure with seven minutes to go, Ricky Taylor ran out wide at Turn 1 and ceded third place to the WTR Cadillac, and suddenly the Mazdas were all over him too, although they were soon split by the other Acura of Cameron.

Then Jarvis snicked ahead of Taylor’s Acura, and Cameron was swiftly by too.

In the closing laps, Bomarito's Mazda tumbled to ninth, behind the recovering AXR Cadillac of Curran and Stephen Simpson in the #99 Oreca.

Porsche’s Laurens Vanthoor grabbed the lead from polesitter Joey Hand in the #66 Ford GT, with Jan Magnussen up to third in the Corvette Racing C7.R ahead of Patrick Pilet’s Porsche, the second Corvette of Oliver Gavin and Richard Westbrook’s Ford ahead of the two BMWs.

However, there was early drama as Hand’s Ford was seen towing loose bodywork under yellow. A replay showed the Ford having been thumped up the backside by Pilet as the field stacked up, and the bodywork was from the Porsche. The incident went under review.

If Hand’s handling was affected with diffuser damage, he showed little sign of it, remaining tucked under the rear wing of his assailant’s teammate, Vanthoor, throughout the early stages.

Connor de Phillippi pitted his BMW M8 to hand over to Alexander Sims still with 70 minutes to go. It paid off with the second yellow of the day, with all the other cars stopping and the #25 BMW cycling to the front.

On the restart, Garcia spun the wheels in the #3 Corvette and fell to eighth, but teammate Tommy Milner had the #4 Corvette up to third, behind Sims and Earl Bamber (replacing Vanthoor in the #912 Porsche) and ahead of the #66 Ford, now piloted by Dirk Muller.

Bamber and Sims had a door-banging battle all down the pit straight on Lap 34, with the Porsche only edging ahead after four corners of side-by-side action. Sadly, just a couple laps later, Sims went out wide at Turn 9 during the frantic scrap for second, third and fourth, and he clouted the wall hard, causing his retirement.

Bamber’s Porsche now led Muller’s Ford, but Milner’s Corvette went up to second on Lap 43 with little more than half an hour to go. Ryan Briscoe lay fourth in the second Ford, with Garcia’s Corvette up to fifth and Jonathan Edwards in the #24 BMW in sixth.

At the restart, Bamber’s front right suspension suddenly sank down, allowing Milner’s Corvette to sweep past into the lead at Turn 9, with the recovering but lapped Tandy acting as a buffer behind him to the #66 Ford of Muller.

Then Briscoe made a great pass on teammate Muller, through Turns 6-7-8 to take second in class, but had just 15 minutes to try and hunt down Milner, now five seconds ahead.

Milner took it very gently over the final lap and made a small mistake at the final corner, but the Ford GTs were still two seconds adrift at the checkers, with Garcia's Corvette a further 1.8s back, but 8s ahead of Edwards' BMW.