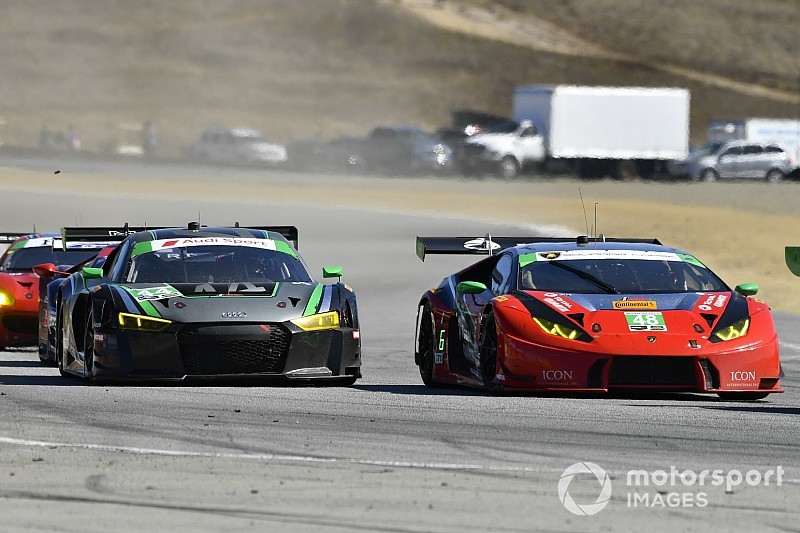 Former class winners of the Rolex 24 Hours and the Sebring 12 Hours Magnus Racing will run a Lamborghini Huracan GT3 Evo in IMSA’s GT Daytona class next year after three years with the Audi R8.

The team has also confirmed that its drivers for the 2019 IMSA WeatherTech SportsCar Championship will continue to be Andy Lally and team owner John Potter.

“It’s great to move forward with everyone at Lamborghini Squadra Corse,” said Potter. “The performance of the Lamborghini over the past several seasons is well documented,” he said, referring to the GTD title glory of Paul Miller Racing this year. “It will be nice to compete with them rather than against them in 2019.

“Since our first meeting, we’ve been remarkably impressed with the attention to customer service and clear communication, which instills a lot of confidence in the future of our working relationship. In particular, I’d really like to thank Giorgio Sanna [head of motorsport for Automobili Lamborghini] and Chris Ward [senior manager of motorsport for Automobili Lamborghini] for being as responsive as they have, with an organization like ours. It’s extremely refreshing.”

Potter also paid tribute to Audi Sport customer racing with whom Magnus Racing won the Rolex 24 at Daytona and Lime Rock Park in 2016, the North American Endurance Cup in the same year, as well as the California 8 Hours in 2017.

“We’re of course appreciative of our last three years with Audi Sport customer racing. We’re proud of the achievement we all had together, and of course Audi will always have a place in our team’s history, and are thankful their support through the years.”

Sanna commented: “We are very excited to have the team at Magnus Racing join us for 2019. The team has a great on-track endurance record going back to their multiple Rolex 24 at Daytona wins, multiple championships, and of course Sebring win as well, but they also have an off-track approach that is very unique. We look forward to working closer together, and are happy to be part of the family and fun atmosphere that the team has created.”

Ward added: “Having Magnus Racing join us adds another great team to our ambitions for another championship year. We’ve enjoyed our experience working with them to this point, and look forward to their approach with racing.”

“Moving into 2019 with Lamborghini is a great move forward for the team,” stated Lally. “We’ve of course been driving against their cars for the last several years and they’ve had a great package, so I’m excited to finally get behind the wheel with next year’s EVO.

“There’s a lot to learn in a short amount of time, but we’re confident we can get up to speed quickly and regain the form we know we’re capable of.”

Castroneves on learning IMSA and his Indy 500 crash