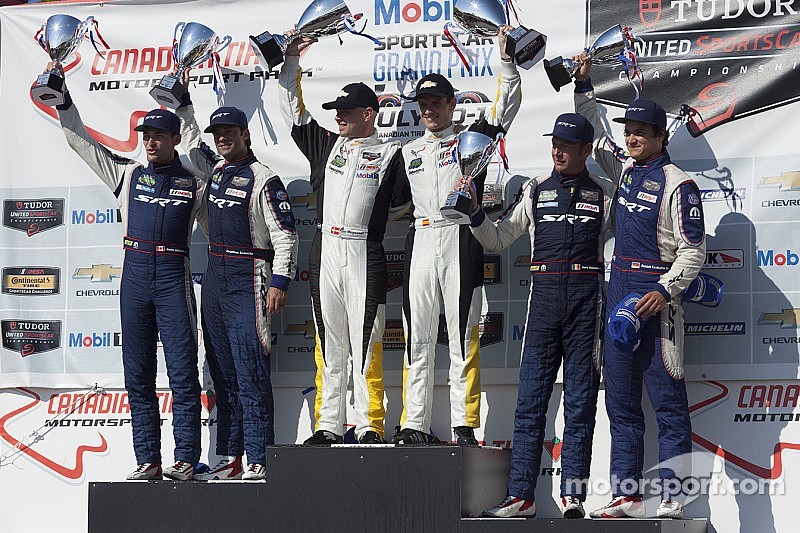 Magnussen turned the Corvette over to Garcia one lap after taking the lead. Garcia led the rest of the way, taking the checkered flag 11.024 seconds ahead of Jonathan Bomarito in the No. 93 Viper in the race that ran without a full-course caution.

“It’s by no means easy what we’ve achieved with the four wins,” Magnussen said after his 41st career victory in North American competition and fifth at the circuit once known as Mosport International Raceway. “It’s difficult out there. You have to be so precise and really work the traffic – that’s where big gains can be made.”

“It was really hard for me, because I was expecting some safety cars (caution periods),” Garcia added. “I couldn’t really be conservative; otherwise the Viper would have caught me.”

Wittmer led the early laps, shadowed all the way by Magnussen. Wittmer had to go through the grass in Turn 5 to avoid the No. 56 BMW Team RLL BMW Z4 GTE of John Edwards on the 42nd lap, hitting a sign in the process. While the incident caused minimal damage to the Viper, the team spent the remainder of the race chasing the Corvette.

Bomarito managed to close the gap during the closing minutes, and was only 1.818 seconds behind Garcia with 12 minutes remaining.

“I made one final charge, but I just didn’t have enough,” Bomarito said. “Antonio got caught up in traffic, and I closed in. Unfortunately, then I got held up in the same traffic and Antonio got away.”

All 10 GTLM cars were running at the finish.

It was the eighth lead change in the competitive class that saw Bleekemolen beat Estre to the checkered flag by 1.038 seconds.

“I felt bad for Kevin, because I saw it all happening in front of me,” Bleekemolen said. “It looked like we were going to be second, but we got a little bit lucky at the end.”

“This is not only our first win, but our first podium,” Keating said. “We have had our share of tough luck this season, so to a certain extent we felt like we were due. We’ve always been down on top speed, but the sweeping corners here really suit out car.”

Estre and Patrick Lindsey were looking to give Park Place Motorsports its first GTD class victory in the No. 73 Porsche 911 GT America, before getting hung up in late-race traffic. Lindsey started seventh and moved up to second before his pit stop, with Estre passing Bleekemolen for the class lead with 57 minutes remaining.

After winning the Sahlen’s Six Hours of The Glen two weeks ago, the No. 94 Turner Motorsport BMW Z4 of Markus Palttala and Dane Cameron led in the early going. A stop-plus-20-second penalty when equipment rolled outside the team’s pit box dropped the team from second to seventh. Cameron managed to work his way back to a third-place finish.

The competitive race saw 16 of the 17 GTD starters running within four laps of the lead at the finish.

The next race for the TUDOR Championship will be the Brickyard Grand Prix at the Indianapolis Motor Speedway on Friday, July 25.