Magnussen: “Hard to swallow” losing win with late off 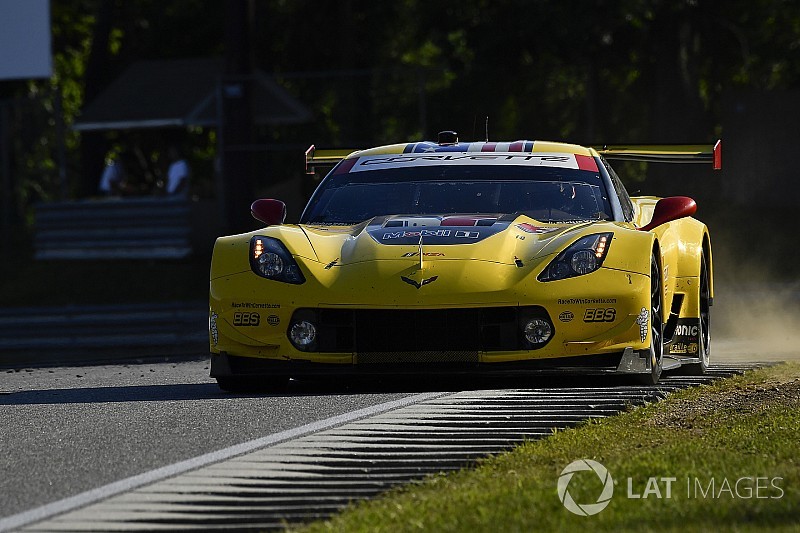 Magnussen and co-driver Antonio Garcia led 150 of the 178 laps at Lime Rock Park on Saturday, but in the closing 15mins as he was going off line as he lapped a GT Daytona car, Magnussen went onto the rubber tire marbles, slid off-track and allowed the Ford GT of Joey Hand to grab the lead.

Had the #3 Corvette C7.R retained the lead, their drivers would have headed the GTLM battle in the IMSA WeatherTech SportsCar championship.

Instead, Hand and co-driver Dirk Muller lead Magnussen andGarcia by just one point, with the #67 Ford GT pilots, Ryan Briscoe and Richard Westbrook (who finished sixth on Sunday) just a further single point in arrears.

Said Magnussen: “It is hard to swallow. It is tough because we had such a great car. Everyone did a fantastic job all weekend – the crew, the engineers, everybody. It was just a little bit of a longer stint for the tire compared to what the Ford had there at the end. It got difficult.

“[Hand] was catching me. I think I could have held him off a little bit longer than I ended up doing because I got into the marbles passing a GTD car on the inside of the last corner, and it just threw me wide off the track. He drove by and that was it.

“I know going that long on the tires was going to be a challenge. But second place isn’t bad. We caught up in the championship which is good.

“Podiums are nice. They are really good for a championship, but when you lead 80 percent of the race, you want to win. I would be lying if I said I wasn’t disappointed, but for everybody it is a good result. I wanted a little bit more for all the hard work the team put in.”

Garcia added: “It’s not what we want for sure, but a third runner-up in a row is good for our average and points. It was so close to our first victory of the season.

"We know how close the competition is here. The strategy was what we needed to do, and I think we knew the tire strategy and management would be the difference. The winners had a little bit more than us in the end, so there was nothing we could really do.”

The result means Corvette still has just one victory to its name this season – the Long Beach triumph for the #4 car’s Oliver Gavin and Tommy Milner at Long Beach.

This pair lie fifth in the championship, just behind Porsche’s Earl Bamber and Laurens Vanthoor and just ahead of the other Porsche pairing of Nick Tandy and Patrick Pilet.

The top six in the championship are covered by just 16 points after seven rounds, with four to go – Road America, VIR, WeatherTech Raceway Laguna Seca and Petit Le Mans.