After finishing third at the Le Mans 24 Hours last year aboard a Nissan-powered Zytek, Mardenbourgh will drive the Nissan-powered Oreca of the Pickett Racing squad which finished fifth at the season opening, Rolex 24 at Daytona. 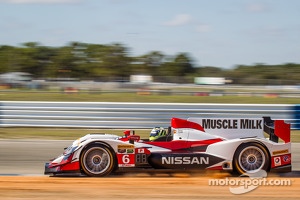 Both the official Nissan/Nismo partner team Muscle Milk Pickett Racing and Oak Racing showed strong speed at the recent Sebring Winter Test. Oak Racing will line up at Sebring with Olivier Pla, Gustavo Yacaman and Alex Brundle who previously represented Nissan with Muscle Milk at Daytona. Oak Racing's NIssan-powered Morgan actually topped the timesheets in two of the four sessions and recorded the second fastest overall time of the week

Nissan will be aiming for its fifth Sebring victory. In the late 80s/early 90s, Nissan dominated the race taking three consecutive wins from 1989 to 1991 with GTP machinery and again in 1994 with the Nissan 300 ZX.

Q: AFTER TESTING AT SEBRING, WHAT ARE YOUR EXPECTATIONS FOR THE RACE?

A: "I'm really looking forward to the Sebring 12 Hour. There's more than 60 cars entered for the race so I think it's going to be really busy and exciting.

"It will be my first time racing at Sebring and with that many cars, and so many great teams and drivers, it's going to be great for my experience."

Q: DO YOU THINK SEBRING IS ONE OF THE MOST UNIQUE TRACKS YOU'VE BEEN TO?

A: "It's the first race track I've been to in America but it's definitely unique in terms of it being on an airfield. The concrete slabs make it so bumpy, which is something completely new for me. Some of the tracks in New Zealand are bumpy but this is even more so.

"Sebring is one of the old-school circuits where if you make a mistake, there isn't tens of miles of runoff. There's grass and then there's tire barriers and concrete barriers as well.

"It's also got corners I've never experienced before at a race track, especially Turn 17 which is completely blind. The first corner, there are variations in the lines that you can take, but because of the bumps throughout the corner it really gets your interest!"

Q: HOW WAS IT WORKING WITH KLAUS AND LUCAS AT THE TEST?

A: "It was great for me because they've got so much experience at that track. They're completely professional guys and were quick to get in the car and be completely on it. That was really good for me to learn from.

"To jump in the car and be on the pace and getting the maximum out of the car within a lap or so, was impressive.

"They've been helping me a lot with their race craft and dealing with other cars on track. They're very good with that. I've watched some previous footage as well of them and they seem very, very good in traffic.

"That's something I'm going to learn a lot from them and it's going to be crucial for Sebring because there's so many cars on track and there really isn't a lot of passing opportunities to get by GT cars. There's really only two straights."

Q: WHAT ARE SOME OF THE OTHER ASPECTS YOU'VE BEEN WORKING ON?

A: "We've been practicing a lot of driver changes. In other championships I've driven in, like British GT or even Le Mans, usually the tires don't go on until the refueling is finished.

"In the TUDOR Championship, you can sometimes be waiting on the driver change. So we were really practicing our driver changes. I think we did a 17 or 18-second driver change in the pits. They can certainly go faster. I'm still at 20 or 21 seconds when I'm changing to Klaus. But we've been working on that a lot.

"We'll be practicing when we're out there for the test as well because it's going to be a very important part. The competition is so close, so every second you can gain in the pit would be easier than it would be on the circuit."

Q: YOU HAVE BIG YEAR AHEAD IN GP3, BUT HOW MUCH DO YOU ENJOY DRIVING DIFFERENT TYPES OF CARS?

A: "I think the more experience you can have in different types of cars can certainly help in the future.

"You can't stay in single-seaters all your life. Everyone eventually goes into GT cars and prototypes later on. To have the experience to race the different variations of these cars now is great.

"It's all about getting the absolute best out of it. Obviously that changes with each car you drive. Figuring out what's best for each car is the best thing that helps.

"For sure there's things you learn in single-seaters. The racing is very, very close and cut-throat. In prototypes and GT racing, there's a bit more care as it's an endurance race. But obviously with having 60 cars at Sebring, it's going to be very close.

"Picking your moment there can be the difference between getting a good result or not finishing at all."

Q: WHAT WERE YOUR OVERALL IMPRESSIONS OF MUSCLE MILK PICKETT RACING?

A: "They are a really professional team. Working with Brandon (Team Manager and Engineer, Brandon Fry) for the first time was great. He's had experience in IndyCar and lots of different cars as well.

"The mechanics are great. They've been helping me out with fitting me in and doing all of the procedures we have to do and working with me on the data and our objectives. I'm looking forward to getting back with them this week."