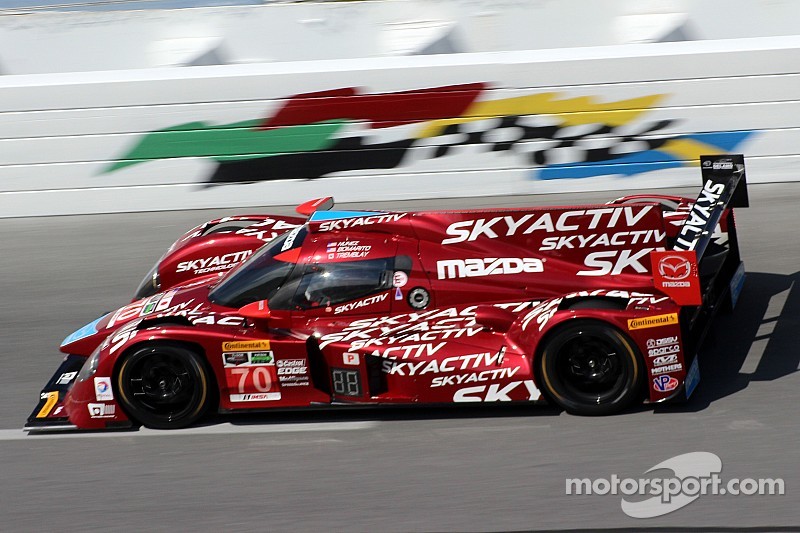 NASCAR regulars will he helping out on the spotter's stand.

The Rolex 24 at Daytona is known for bringing star drivers from around the world to Daytona International Speedway to compete in North America’s ultimate endurance race. Many have glittering credentials from Formula 1, IndyCar, NASCAR and more. For 2015, Mazda has added IndyCar star James Hinchcliffe to the driver lineup, and the team has also added two prominent NASCAR spotters.

Taking care of the team and drivers from high atop the Speedway will be Tim Fedewa, former NASCAR driver and spotter for 2014 Sprint Cup champion Kevin Harvick, and Tyler Green, who has spotted for driver Aric Almirola for the past five seasons. Green guided Almirola to victory in the Sprint Cup race at Daytona last July. The duo will join Mazda’s primary spotter Chris Long, who can found during the week running the seven-post rig at Chip Ganassi’s NASCAR shop in Concord, NC and is the brother of Mazda driver Tom Long. The other primary spotter for the team is Daniel Tremblay, the son of Mazda SpeedSource team owner and driver, Sylvain.

“It is a lot tougher than I had imagined,” said Fedewa. “It really keeps you on your toes. I’m used to spotting where the cars on the track are all similar, and everyone runs pretty close to the same speed. For the 24, a spotter has to use a lot more knowledge because of multiple drivers, and the different classes and strategies involved. They all have different speeds and attributes, so I need to be aware of that at all times.”

Working together for the second year in a row, Fedewa and Green will trade duties every four hours during the race.

Four on, four off

“We will do four hours on, and four off,” explained Green. “We’re used to long days on the spotter stand at NASCAR races, but this is like doing three 500-mile Cup races in one day. You try to relax and sleep when you’re off, but it’s not easy. There’s always a lag of 30 minutes or more before you’re able to get to sleep.”

“It’s pretty straightforward in the daytime,” said Fedewa. “But, it’s not lit up like a NASCAR race when it’s dark. So, you have to focus that much more. It can be cold with fog or rain, and you do get tired, but you have to stay focused on the car and work with the crew on whatever they need. Watching it on TV is one thing, but there is so much more involved than I imagined.”

Mazda has 23 class victories at Daytona since 1975, and this is the second year of an aggressive developmental program with the Mazda SKYACTIV prototype machines.