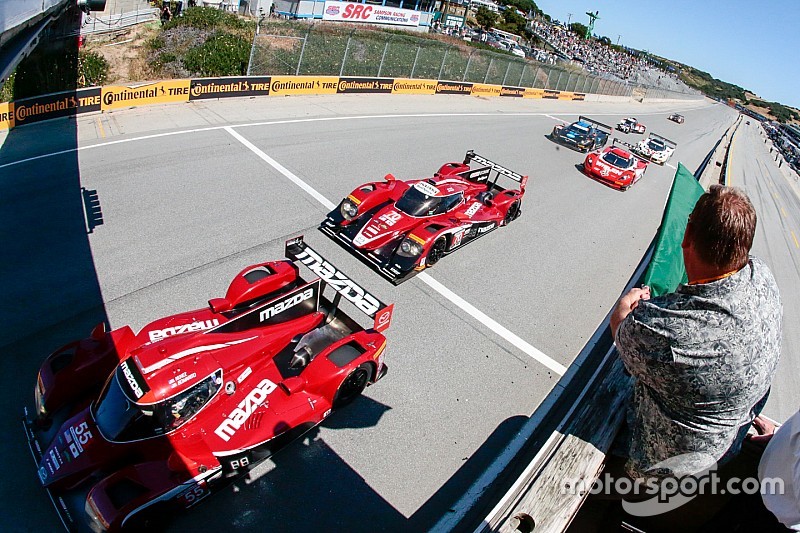 Jonathan Bomarito says he is “gutted” for the team after both Mazda Prototypes failed to score a representative result at Laguna Seca, after dominating the weekend.

Monterey-born Bomarito, who is renowned as an ace at his home track, was on course to recover the lost ground caused when the fuel hose took too long to connect during a pitstop.

The #55 Mazda Prototype had fallen from first to sixth place, as the Mazda pair’s 16-second advantage had been wiped out by a full-course caution period. Yet within two laps, Bomarito, taking over from polesitter and starting driver Tristan Nunez, had sliced through to second place and started homing in on Michael Shank Racing’s Ozz Negri, who he caught in traffic on lap 45.

However, Bomarito spun at Turn 10 as he spied a half-chance down the inside of Negri and lost 20 seconds. Although he was able to pit again and rejoin, his tires were not changed and he elected to consolidate his fourth place. That matched the team’s best result, scored in the previous round, when Joel Miller/Tom Long and Bomarito/Nunez scored fourth and fifth places at Long Beach.

Long and Miller retired the #70 Mazda at half distance with an oil pump failure, but at least managed to claim fastest lap.

Of his charge into second place, Bomarito said: “I knew we had the refueling issue, so I knew I had to push hard to get by the Daytona Prototypes because we didn’t want the #60 car [Shank Ligier-Honda] to get away. We were able to do that. It was fantastic and it was good, hard racing.

“We had some traffic coming into Turn 10 and I saw an opportunity to go for the lead. I was just a little bit too aggressive getting back on the power and lost the rear end. So, that was pretty much our race right there. Once you spin and flat-spot or hurt the tires, there’s not any coming back from that.

“We were on a storybook weekend and we didn’t finish it so I’m gutted for the team and everyone at Mazda and SpeedSource. These guys work harder than anybody else, so you wear that on your shoulders as a driver and you want it for them really bad.”

Nunez described the first 25 laps in the lead as “a beautiful feeling. No one in front of me, just a clear track ahead and leading in a Mazda at Mazda Raceway is an incredible feeling.

“We were so much faster than the field. Just a great car all weekend. The engineers stepped up their game and gave us a heck of a car.”

Given Mazda’s surprising pace at Long Beach, which Mazda expected would be one of its worst tracks, and the fact that the Prototype was as quick as anticipated around Laguna Seca’s relatively smooth 2.238-mile course, Nunez said he is convinced the team can win this year.

“There’s a lot of positives that came out of this weekend, and that’s all we can look forward to,” he said. “We take the positives, get rid of the negatives.

“Everyone has a huge amount of passion and we all share that same drive to get that win. It’s just a matter of time.”

“A curse has been lifted” for Michael Shank Racing