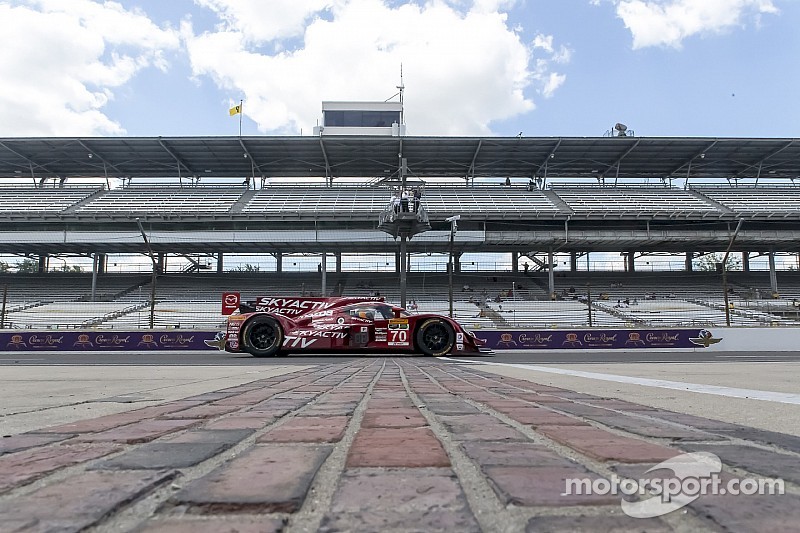 Two all-new cars in a row have been a challenge for the team.

The people at Mazda have had to learn a quality this past year that racers typically don’t embrace: Patience.

Not the sort of on-track patience that tells a driver to wait until the next corner, not this one, to try to make a pass. Not even the sort of patience that engineers and crew tell themselves after one bad race that next week, they’ll the on the podium.

As Mazda has sought to develop its SKYACTIV Diesel Prototype to compete in the TUDOR United SportsCar Championship, the sort of patience required by Mazda, its drivers, its crew and its development company, Florida-based SpeedSource, has been more basic, more modest. Get the car and engine built. Make it run. Keep it running the whole race.

And then, finally, make it go fast – faster than the other Prototypes.

The program is profoundly ambitious, inarguably the most ambitious on the grid. Mazda and SpeedSource had a tremendous amount of success with the rotary engine, winning race after race and multiple championships, even the 24 Hours of Le Mans, with rotary engines. The RX-7 and RX-8 race cars often dominated.

Then came word that the rotary-engine RX-8 would be dropped from the production lineup, sending Mazda looking for something to race. Then it was revealed that the Mazda 6 sedan would be available with a diesel engine, so Mazda and SpeedSource quickly built a diesel-powered car to compete in Grand-Am’s new GX class. After some teething problems, the car started winning, and took the championship.

And then came the merger between Grand-Am and the American Le Mans Series, and the GX class was cancelled, again sending Mazda looking for something to race.

Mazda decides to go for it

So they decided to swing for the fences. Under the hands-on leadership of Mazda’s North American racing director John Doonan, and SpeedSource owner Sylvain Tremblay, work began on a turbocharged diesel four-cylinder that would go into a P2 Prototype. The first goal would be to race it in the TUDOR Championship series. The eventual goal: A return to Le Mans.

Nothing about the project has been easy. Lola, the chassis builder, folded. The diesel engine and its power delivery – so much torque down low – has required countless revisions to the drivetrain.

Finally, though, there is a light at the end of the tunnel. As the team approaches today’s Brickyard Grand Prix at the Indianapolis Motor Speedway, the two-car team is coming off its best finish of the season, a sixth at Canadian Tire Motorsports Park. The outright speed is still lacking – the two cars qualified 20th and 21st for today's race out of the 48 cars that took time – but Mazda and SpeedSource view every race as a test session. Slow and steady may not win the race, but it will teach you a lot about running faster next time.

The team itself is really ticking.

Driver Tom Long, who won in the GX-class Mazda 6 at the Brickyard last year, is aware that it is unlikely he’ll repeat today. But, he says, “We’re really at an exciting point of the season in the progress of the SKYACTIV Diesel Prototype. The team itself is really ticking, working as hard as they ever have, keeping the cars pushing forward and being more and more competitive. We’re really excited about what the rest of the season has for us.”

Race coverage starts at 5:30 p.m. ET today on Fox Sports 1. MRN Radio will also have live coverage, and IMSA.com has coverage of the TUDOR Championship race, and before it, the Continental Tires Challenge.