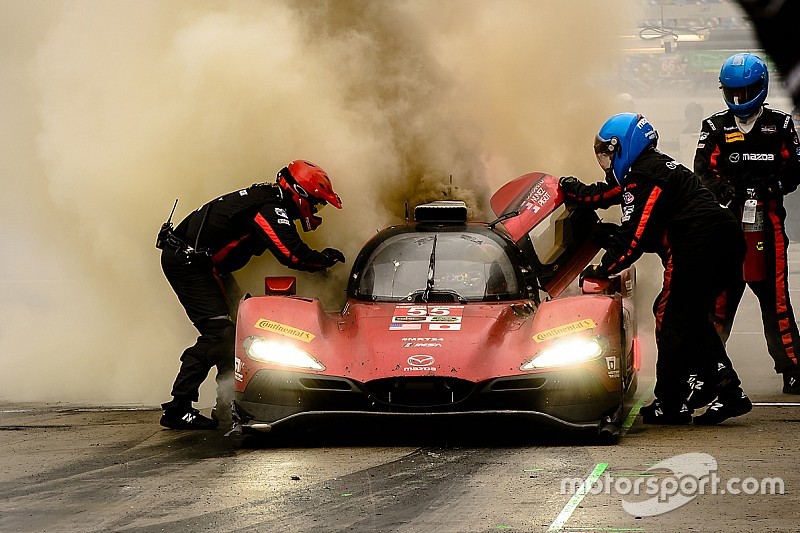 Mazda chiefs and drivers say that the mechanical misfortunes that struck its new RT24-Ps in the Rolex 24 Hours at Daytona would lead to improvements that will be implemented in time for the Sebring 12 Hour race.

The #55 Mazda of Jonathan Bomarito, Tristan Nunez and Spencer Pigot suffered a radio failure that meant Pigot was penalized for an improper procedure under a full-course caution. Nonetheless it had climbed back to fifth when an oil line failure set fire to the car after 19 hours.

Meanwhile the #70 of Joel Miller, James Hinchcliffe and Tom Long sucked in some debris in the early stages, later required a new rear wing assembly after being struck from behind by the victorious Cadillac of Wayne Taylor Racing and suffered transmission failures twice. The second failure proved terminal with just half an hour of the race to go.

However, Bomarito believes the RT-24P has potential and will suit higher downforce spec.

He commented: “It was really tough race, the roughest 24 Hours that I’ve done, and that’s because of the weather. The temperatures were cool, so it wasn’t as hot in the car, but mentally, it was very taxing.

“I think we definitely learned a lot. There were a lot more positives than things we need to improve, for sure. The guys did a good job, the car ran great.

“I’m already looking forward to Sebring. Once we get to the new Continental road course tires and the higher downforce package, these Mazdas are gonna be something. The car’s great, it’s definitely a driver’s car.”

Added John Doonan, director, Mazda Motorsports of North America: “The goals were to survive until Sunday, and then to lead the last lap. Fortunately, both cars achieved the first, but we didn’t grab the second.

“We had a couple of failures that we learned a lot from. Mazda wins as a team, and we learn as a team. That’s what we need to take away from the weekend. We learned from almost 38 hours of running time with the new cars and we can take that into the next six weeks prior to the 12 Hours of Sebring, a race where Mazda has 13 class victories.

“We hope to hoist the Mazda banner at Sebring!”