A tough road to full recovery lies ahead for Gidley.

DAYTONA BEACH, Fla. (February 5, 2014) – Memo Gidley, driver of the No. 99 GAINSCO/Bob Stallings Racing Corvette Prototype, begins the next chapter in his recovery effort, having been discharged from Halifax Health in Daytona Beach, Fla. tonight.

After undergoing three separate surgeries as a result of an accident in the Rolex 24 At Daytona, Gidley is being medically transported this evening via airplane to northern California where he will continue his recovery and begin his rehabilitation. 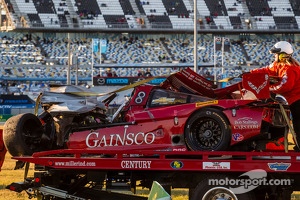 “I’m extremely happy and relieved to see Memo taking the next step in his recovery process,” team owner Bob Stallings said. “Memo has been stabilized enough so he can make the flight to northern California and be transferred to another medical facility which has a very capable protocol for handling the types of injuries and recovery process that Memo requires. The doctors and nurses from Halifax have done a terrific job in getting him to this point, and I know that Memo is appreciative of it and everything that has been done on his behalf.”

While there is not a set time frame for his recovery and rehabilitation, doctors anticipate that he will make a positive recovery but that it is likely to take several months or longer.

“I’ve had great care while I have been here at Halifax,” Gidley said. “From the nursing staff to the doctors, I appreciate all they have done for me. I know it will take a while for me to get back on my feet, but I will be working hard for all the fans, friends and family who have been pulling for me since the accident.”

Team owner Stallings remained at thehospital through Gidley's surgeries and has continued to talk with himdaily. Many friends and drivers have also visited Gidley, including the No. 99 “Red Dragon” co-drivers Alex Gurney, Jon Fogarty and Darren Law, as they visited with Gidley prior to their return home and have remained in touch with him throughout his stay at Halifax Health. IMSA TUDOR United SportsCar competitors Jordan Taylor and Ricky Taylor visited Gidley several times and set up a PlayStation 3 in his room.

“We are truly overwhelmed by the outpouring of love and support from family, friends and fans worldwide,” said Gidley’s mom and girlfriend, who have been at the hospital with Gidley. “Special thanks to Jim France, Mike Helton, Ed Bennett, Scott Atherton and the entire NASCAR/IMSA organization, John Gorsline and his team, and the amazing GAINSCO/Bob Stallings Racing family for contributing so much to Memo’s care. Extra special thanks to Bob Stallings who has been by Memo’s side since day one, working tirelessly to ensure Memo gets the best treatment and has the best prospects for a full recovery. Because of everyone’s support and prayers, we are optimistic he will fully recover.”

Rolex 24 through the eye’s of Dion von Moltke

Daytona 24 done, what is next for TUSC?