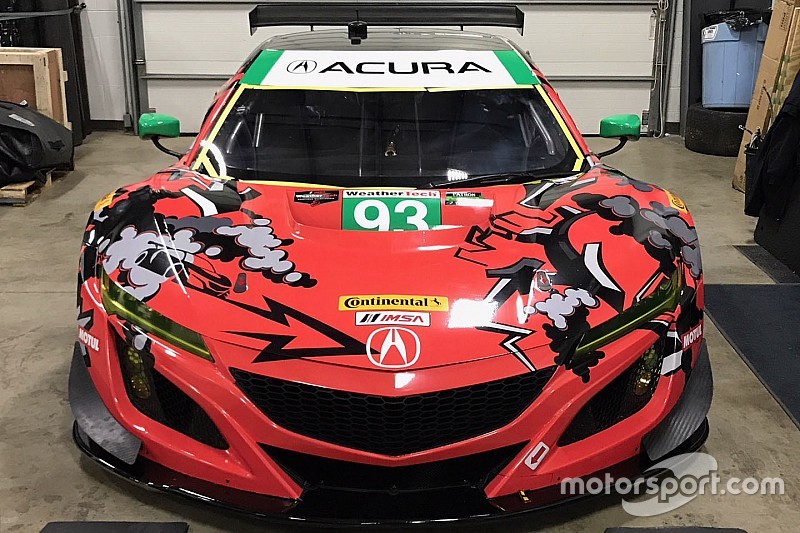 Pataskala, Ohio (30 December 2017) – Michael Shank Racing, which has a long history of developing fan-favorite liveries, will ring in the New Year with a stunning new look at Daytona International Speedway this week. The team, which will return for its 15th consecutive Rolex 24 At Daytona campaign will launch its 2018 IMSA WeatherTech SportsCar Championship program, and will make another bold statement with its dual Acura NSX GT3 liveries once again.

The 2017 IMSA season saw the team not only break through for two race victories with the all-new Acura NSX GT3, but the Ohio-based squad also kept photographers on their toes with a series of innovative liveries through the season. The iconic Fourth of July liveries, which featured Uncle Sam and the Statue of Liberty, had a tremendous response from race fans. The move to Acura-specific colors, available only on the production Acura NSX machines, was another chapter in the team striking a new look as it then closed out the year with a throwback scheme that echoed the colors the team carried to victory in IMSA Prototype competition.

Both designs, which were originally created for MSR team driver suits by Jessica Karp – were so eye-catching to team owner Mike Shank, that they were soon transformed for the two car Acura NSX GT3 lineup.

“We had some awesome designs last year, but this season we are not carrying the Acura branding so that gave us a bit of a clean slate to come up with something all-new, and when we saw the renderings for the driver suits it was something that we wanted to go even further with and put on the cars,” said team owner Mike Shank. “It came out even better than we were hoping it would! We are all packed and ready to get to work down in Daytona and hopefully everyone is as excited about these cars as we are.”

The Michael Shank Racing Acura NSX GT3 lineup will set its debut at the annual Roar Before the 24 event at Daytona International Speedway on January 5th.

Alonso “out of my comfort zone” in Daytona 24 Hours