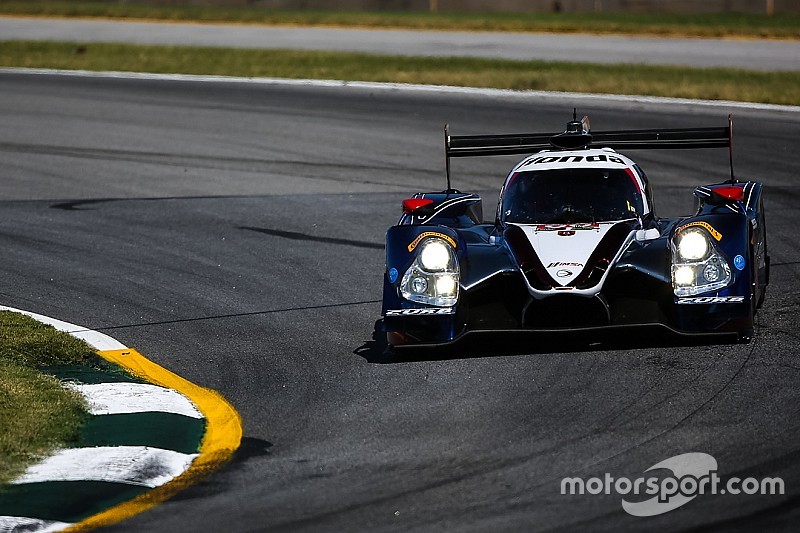 While teammate Olivier Pla led the morning session with a 1min14.157sec lap of the 2.54-mile road course, Negri clipped that down to a 1m13.9s, as the Mazda Prototypes edged nearer the ultimate pace.

This afternoon, Joel Miller came within 0.219sec of Negri in the #70 Mazda, while Tristan Nunez was the same distance behind again, in the sister Mazda.

The championship-leading #31 Action Express Racing entry, in the hands of Dane Cameron, was fastest of a quartet of Corvette Daytona Prototypes. He was followed by teammate Filipe Albuquerque who joins Christian Fittipaldi and Joao Barbosa in the #5 car this weekend, Marc Goossens in the VisitFlorida.com machine, and Jordan Taylor in the Wayne Taylor Racing entry.

Scott Sharp was fastest of the drivers in Extreme Speed’s Ligier-Honda, albeiut 1.8sec from the Negri’s benchmark.

In the Prototype Challenge class, Johnny Mowlem – for whom this will be his final crack at Petit Le Mans – led in the #20 BAR1 Motorsports Oreca, followed by Jose Gutierrez (PR1/Mathiasen Motorsports) and Kenton Koch (Performance Tech Motorsports).

Daniel Serra outpaced the championship contenders in the GT Le Mans class, lapping in 1min19.236 in Scuderia Corsa’s Ferrari 488 GTE. The #66 Ford GT of Joey Hand was second fastest, ahead of Giancarlo Fisichella in the Risi Competizione Ferrari 488, and the second Ford wheeled by Richard Westbrook.

The #4 Corvette C7.R, in the hands of Oliver Gavin, was 1sec from Serra’s time and languishing in ninth, although teammate Jan Magnussen in the #3 car was just half a second off the pace.

While the works Porsche 911s were only seventh and eighth in GTLM, it was Jorg Bergmeister in the Park Place Motorsports 911 who set the GT Daytona pace, 0.15sec ahead of Jeroen Bleekemolen in the Riley-run ViperExchange Dodge Viper.

Behind them came Jeff Segal in a Scuderia Corsa Ferrari 488 GT3, Lawson Aschenbach in the fastest of the Stevenson Motorsports Audi R8s, and Paolo Ruberti in the fastest Lamborghini Huracan, that of Dream Racing.